Iran’s Supreme Leader Ayatollah Ali Khamenei said Tuesday there will be no one-on-one talks with Washington after Tehran was blamed for weekend attacks on Saudi installations that sent global oil prices soaring.

President Donald Trump warned the U.S. was “locked and loaded” to respond to the attacks, as Breitbart News reported. The president also tweeted he had authorized the release of oil from the U.S. Strategic Petroleum Reserve, “if necessary,” to minimise the effect of the strikes on global oil markets and keep pressure on Iran.

For its part, Iran rejected accusations of complicity and ruled out any possible diplomatic solution to the current impasse between the two countries.

“The policy of ‘maximum pressure’ against the Iranian nation is worthless and all Islamic Republic of Iran officials unanimously believe there will be no negotiations with the U.S. at any level,” he said, quoted on his official website.

He continued: “If America changes its behaviour and returns to (Iran’s 2015) nuclear deal, then it can join multilateral talks between Iran and other parties to the deal.”

Tehran and Washington have been at loggerheads since May last year when U.S. President Donald Trump withdrew from the Obama-era 2015 Joint Comprehensive Plan of Action (JCPOA) nuclear deal and began reimposing crippling sanctions in a campaign of “maximum pressure.” 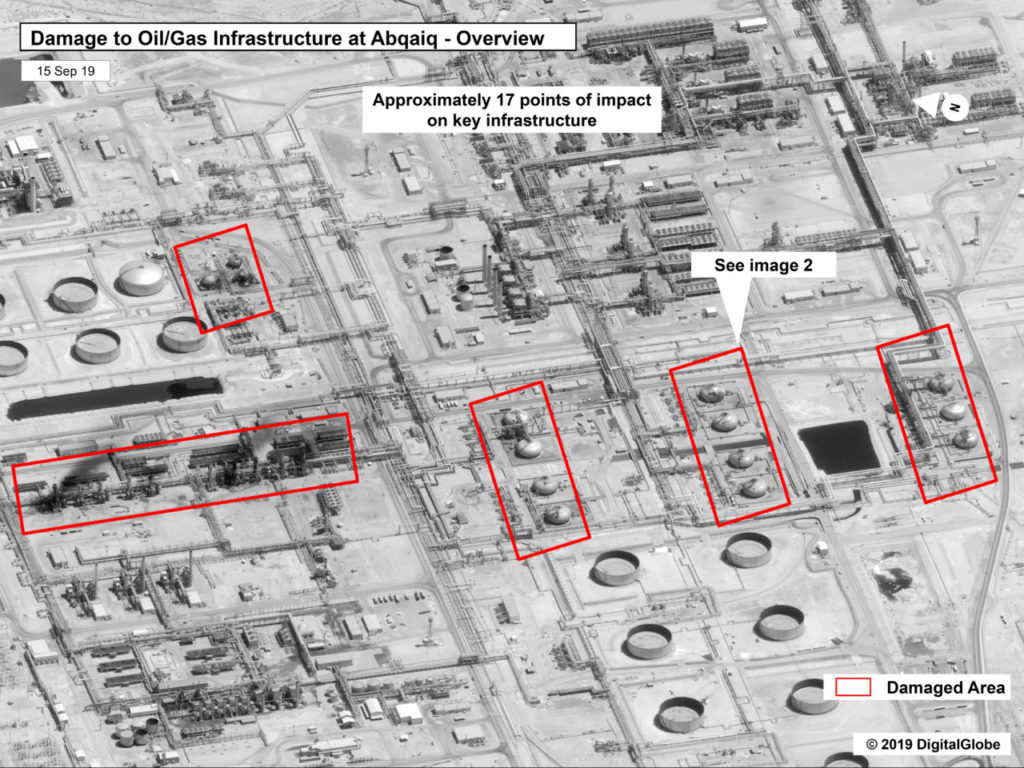 This image shows damage to the infrastructure at Saudi Aramco’s Abaqaiq oil processing facility in Buqyaq, Saudi Arabia. The drone attack Saturday on Saudi Arabia’s Abqaiq plant and its Khurais oil field led to the interruption of an estimated 5.7 million barrels of the kingdom’s crude oil production per day, equivalent to more than 5% of the world’s daily supply. (U.S. government/Digital Globe via AP)

Rouhani has already rejected the possibility of direct negotiations with the U.S. unless it lifts all sanctions. He has said even if the sanctions are lifted, any talks must be held in the framework of the nuclear accord.

The supreme leader reiterated this on Tuesday, saying that if the U.S. “repents” and returns to the JCPOA, then it can talk with Iran along with other parties to the deal.

“Otherwise no negotiation will take place” between officials from the Islamic republic and the United States “at any level, whether in New York or anywhere else”.

Trump’s declaration on Monday that it “looks” like Iran carried out unprecedented and devastating attacks on Saudi oil sites pushed the furious denial from Rouhani.

Trump affirmed he was ready to help its ally Saudi Arabia after the attacks that triggered a record leap in world oil prices.

“I’m not looking to get into new conflict, but sometimes you have to,” he said. “That was a very large attack, and it could be met by an attack many, many times larger.

“Certainly, it would look to most like it was Iran,” Trump added.

U.S. Secretary of Defence Mark Esper also singled out Iran as a regional destabilising force, while stopping short of directly accusing Tehran over the strike.