ATHENS, Greece (AP) — Greek police said Saturday they have arrested a suspect in the 1985 hijacking of a flight from Athens that became a multi-day ordeal and included the slaying of an American.

Police said a 65-year-old suspect in the hijacking was arrested Thursday on the island of Mykonos in response to a warrant from Germany.

Lt. Col. Theodoros Chronopoulos, a police spokesman, told The Associated Press that the hijacking case involved TWA Flight 847. The flight was commandeered by hijackers shortly after taking off from Athens on June 14, 1985. It originated in Cairo and had San Diego set as a final destination, with stops scheduled in Athens, Rome, Boston and Los Angeles.

The hijackers shot and killed U.S. Navy diver Robert Stethem, 23, after beating him unconscious. They released the other 146 passengers and crew members on the plane during an ordeal that included stops in Beirut and Algiers. The last hostage was freed after 17 days.

The suspect was in custody Saturday on the Greek island of Syros but was set to be transferred to the Korydallos high security prison in Athens for extradition proceedings, a police spokeswoman told The Associated Press. She said the suspect was a Lebanese citizen. The spokeswoman spoke on condition of anonymity because the case was ongoing. 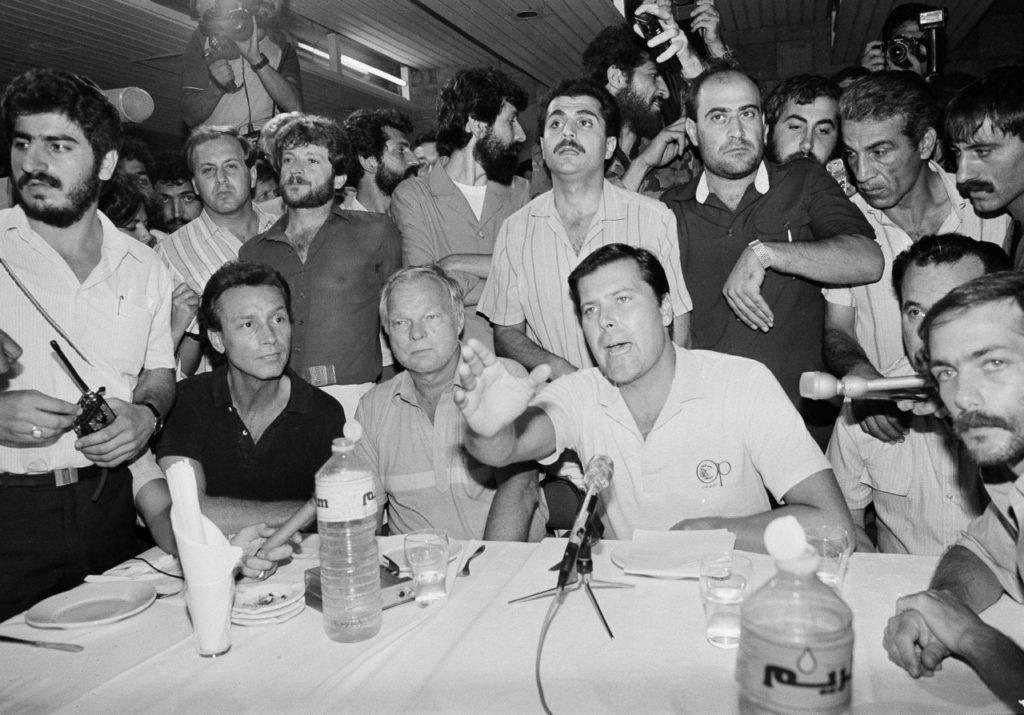 Hostage Allyn Conwell, 39, of Houston, Texas, waves his hand and yells as he replies to reporter’s questions during a news conference at Beirut International Airport Thursday, June 20, 1985. Journalists were pushed and shoved by Shiite Muslim AMAL Militiamen away from the five hostages. The Americans are part of 40 hostages taken during highjacking of TWA flight 847. Sitting to Conwell’s right is Peter Hill, 57, of Hoffman Estates, Ill., Thomas Cullins, 42, Burlington, Vt. At his left is Arthur Toga, 33, of St. Louis, Mo. (AP Photo/Azakir)

In Beirut, the Foreign Ministry said the man detained in Greece is a Lebanese journalist called Mohammed Saleh, and that a Lebanese embassy official planned to try to visit him on Sunday.

However, several Greek media outlets identified the detainee as Mohammed Ali Hammadi, who was arrested in Frankfurt in 1987 and convicted in Germany for the plane hijacking and Stethem’s slaying. Hammadi, an alleged Hezbollah member, was sentenced to life in prison but was paroled in 2005 and returned to Lebanon.

Germany had resisted pressure to extradite him to the United States after Hezbollah abducted two German citizens in Beirut and threatened to kill them.

Hammadi, along with fellow hijacker Hasan Izz-Al-Din and accomplice Ali Atwa, remains on the FBI’s list of most wanted terrorists. The FBI offered a reward of up to $5 million for information leading to each man’s capture.