Arab leaders said in a statement the pan-Arab bloc, “rejects the U.S.-Israeli ‘deal of the century’ considering that it does not meet the minimum rights and aspirations of Palestinian people.”

It also vowed not to “cooperate with the U.S. administration to implement this plan.”

Trump’s plan would see the establishment of a contiguous but demilitarized Palestinian state on most of the West Bank with parts of eastern Jerusalem that are outside the Israeli security fence as its capital.

Jerusalem would remain undivided and under Israeli control.

Israel would be allowed to annex all Jewish settlements in the West Bank and Jordan Valley.

Arab leaders warned against Israel taking unilateral steps towards annexation, saying it would call on the international community to prevent it from doing so.

Palestinian Authority President Mahmoud Abbas announced at the emergency summit of the League in Cairo, Egypt, he was cutting all ties with both the U.S. and Israel in response to the plan, including all security ties.

“I will never accept this solution,” Abbas said. “I will not have it recorded in my history that I have sold Jerusalem.”

“We’re not nihilists,” he added. 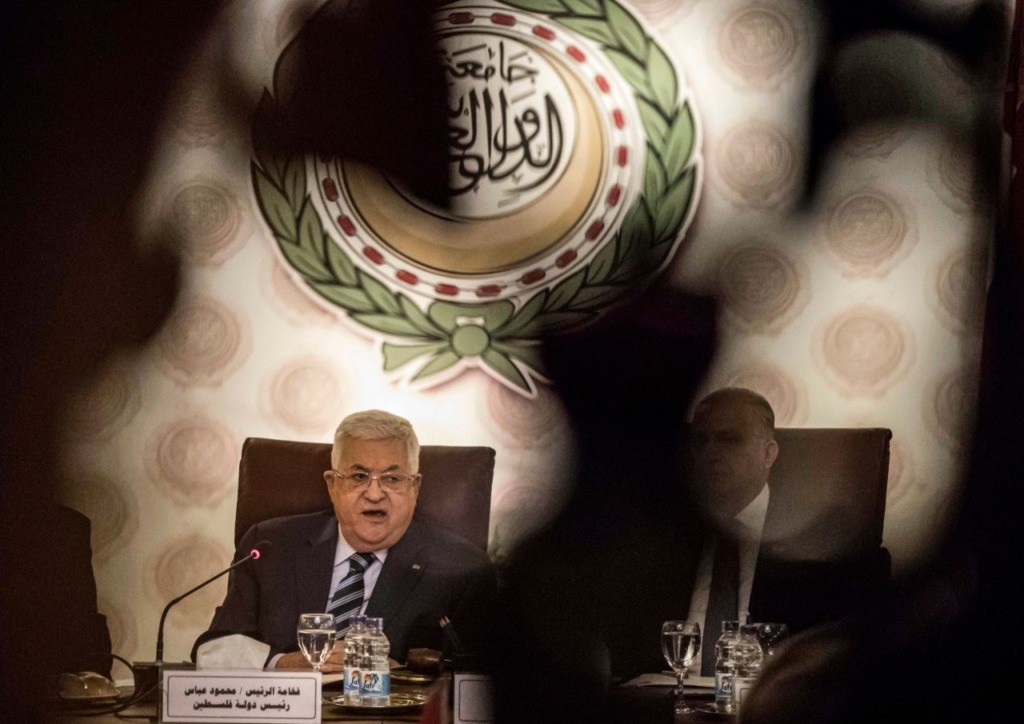 Palestinian president Mahmoud Abbas attends an Arab League emergency meeting discussing the U.S.-brokered proposal for a settlement of the Middle East conflict at the league headquarters in the Egyptian capital Cairo on February 1, 2020. (KHALED DESOUKI/AFP via Getty Images)

Abbas announced he would present a counter-offer before the United Nations Security Council.

Arab leaders applauded Abbas’ remarks, and promised they would stand by the Palestinians.

Jordan’s foreign minister,  Ayman Safadi, said: “We warn against the consequences of any unilateral Israeli step that will determine facts on the ground.” He said establishing and developing settlements was “a breach of international law.”

While Egypt had initially supported the plan, it said at the meeting that it now stood “in line with international resolutions, on establishing a Palestinian state with East Jerusalem as its capital.”

Earlier, Egypt had said it welcomed Trump’s efforts and encouraged Israelis and Palestinians to “study the plan closely” in order to establish an “independent and sovereign state on the occupied Palestinian territories.”

“This turn does not help achieve peace and a just solution,” he said.

The UAE had a more positive response, with its foreign minister, Anwar Gargash, saying, “It is important … to come out with a constructive stance, a realistic stance and a positive strategy that goes beyond just condemnation.”

According to Israeli journalist Barak Ravid writing for the Axios website, the White House failed to build a coalition of Arab countries that would prevent an Arab League resolution against the plan.

In response to the Arab League’s rejection, a senior U.S. official on Saturday released a statement saying that such rejectionism would never ease the decades-long suffering of the Palestinians.

“It is only by having a wiliness [sic] to try a new approach that we will make a breakthrough in a conflict that has left the Palestinian people to suffer for decades,” he said.

“Past Arab League resolutions have placated Palestinian leadership and not led to peace or progress and it is important to try a new approach or the Palestinian people’s fate will not change.” the official added.