Palestinian President Mahmoud Abbas once again had the opportunity to show off his polished skills in the art of double-speak in his address to the United Nations Wednesday. It was, to wit, classic Abbas: brimming with non-sequiturs, misinformation and outright lies.

The purpose of the speech was to categorically reject President Donald Trump’s recently unveiled peace plan and to garner support at the U.N. Security Council for a draft resolution opposing the proposal. A draft text originally put forward by Tunisia and Indonesia was reportedly backed by only five of the council’s 14 member states and was therefore pulled by the Palestinian leadership in an attempt to save face. 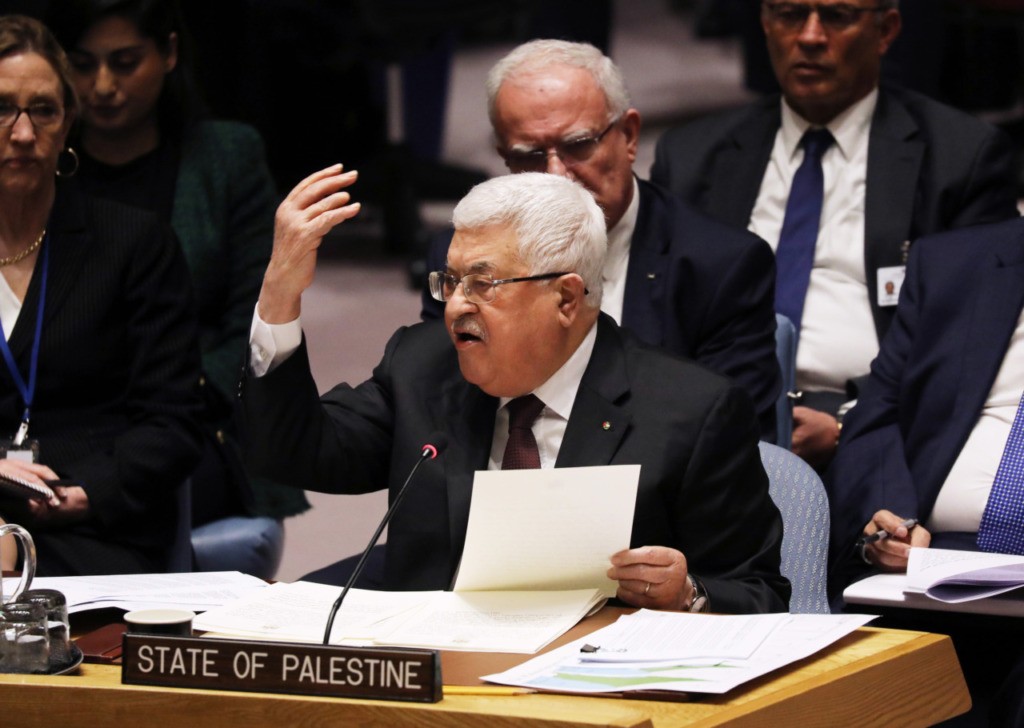 A recurring theme in the address was Abbas’ thinly-veiled attempt to rewrite history. The Palestinian leader is no newcomer to revisionism. He has a sordid history of Holocaust denial and his 1982 doctoral dissertation, among claims that the six million figure is invented, also asserted that Zionist leaders cooperated with the Nazis during the genocide of European Jews. He is famous for saying one thing to an international audience and quite another to his home base.

Abbas this week called on Palestinians to take to the streets and employ “popular resistance activities” over Trump’s “plot to liquidate the Palestinian cause,” the Palestinian Authority infamously pays out hundreds of millions of dollars per year to terrorists and their families, yet Abbas continues to repeat the claim – made again on Wednesday – that his leadership is only interested in peace.

During his speech, Abbas made the dramatically distorted claim that the Oslo peace accords failed because of the assassination of former prime minister Yitzhak Rabin.

“We have reached peace without the intervention of anyone, in Oslo. We were willing to commit to that agreement, until we reach a solution. However, they killed Rabin,” Abbas said.

Positing such a bombastic statement warps the timeline of events during the mid-1990s.  The first Intifada culminated with the signing of the doomed accords in 1993 after which the Palestinians launched a terror rampage killing dozens of Israelis in suicide bus bombings and other attacks, beginning some two years before Rabin’s 1995 assassination.

Abbas also employed revisionist tactics in his oft-repeated references to a bygone Palestinian state. “Jerusalem is no longer under the sovereignty of the state of Palestine,” he lamented. Such language, of course, infers that there once was a state of Palestine.

“Jerusalem is occupied land. Who has the right to give this as a gift to one state or another? We came before you,” Abbas went on.

The last sentence is instantly debunked when you consider that Jews have had an unbroken presence in the Holy Land since biblical times.

Nevertheless, Abbas forges on, this time bringing in a little show-and-tell in the form of a series of maps showing the territory in 1917, 1937, 1947, 1967 and 2020. “Every time I look at this map, I lose hope. Is this what the Palestinian people deserve?” Abbas emoted. “Why? We were here,” he said, referencing the first map in which the majority of the territory is green – and by Abbas’ logic – Palestinian. “And how did we get to this point, in these small islands,” he continued, referencing the last map which shows the conceptual map for a future Palestinian state according to Trump’s plan, or, as Abbas would have it, “Swiss cheese.” 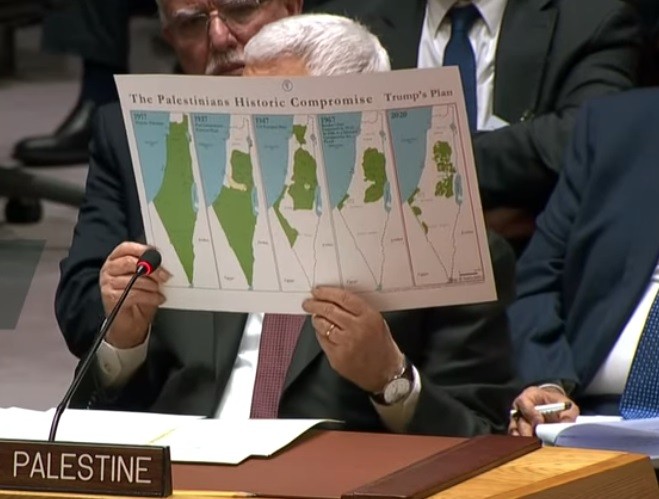 Mahmoud Abbas brought his own his own maps to back his arguments at the U.N. Security Council (Screengrab)

Yet there’s only one problem. The maps conveniently leave out any indication that pre-1948 Palestine was actually territory belonging to the Ottoman Empire and then the British Mandate, and not, as put forward by Abbas, a sovereign Arab state of Palestine that would later be stolen by Israel. Abbas has made similar claims before, even going as far as to claim in an op-ed published in the New York Times that in 1948 “Zionist forces expelled Palestinian Arabs to ensure a decisive Jewish majority in the future state of Israel, and Arab armies intervened.”

Arabs fled or were expelled after the nascent State of Israel’s army fought back the invasion of five Arab armies and Palestinian militias, not the other way around. Abbas also conveniently failed to mention, either in the NYT op-ed or in Wednesday’s speech, that the third map showing the 1947 partition plan was roundly shunned by the Palestinians – sparking a decades-long tradition of Palestinian rejectionism that continues until this day.