Riyadh (AFP) — Saudi Arabia is treading a tightrope as it bars Muslim pilgrims from Islam’s holiest sites to contain the coronavirus, rolling out restrictions that while essential could prove both expensive and politically perilous.

The kingdom has suspended the “umrah” year-round pilgrimage over fears of the disease spreading to Mecca and Medina, raising uncertainty over the upcoming hajj — a key pillar of Islam.

The pilgrimages, which pack millions of people into relative small religious sites, could be a major source of contagion and the move mirrors a precautionary approach across the Gulf to cancel mass gatherings — from concerts to sporting events.

But the issue is still a potential powder keg in a volatile region where it risks riling fringe hardliners for whom religion trumps health considerations.

And some devout Muslims view the pilgrimages as an important rite of passage, whatever the risks. 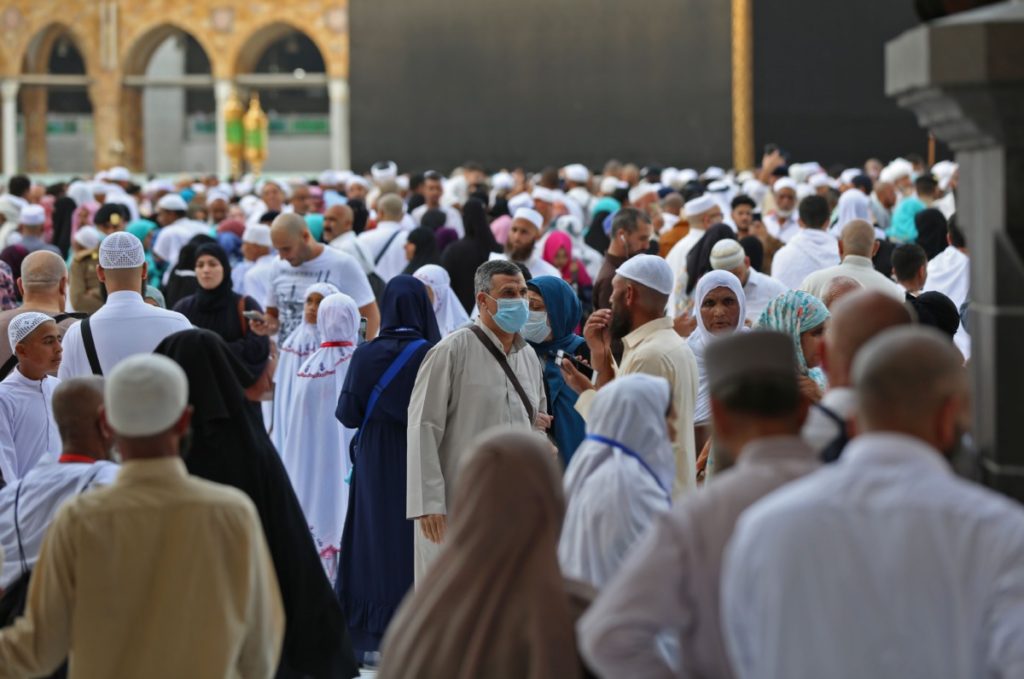 Muslim pilgrims wear masks at the Grand Mosque in Saudi Arabia’s holy city of Mecca. Saudi Arabia suspended visas for visits to Islam’s holiest sites for the “umrah” pilgrimage, a move triggered by coronavirus fears that raises questions over the annual hajj. The kingdom, which hosts millions of pilgrims every year in the cities of Mecca and Medina, also suspended visas for tourists from countries with reported infections as fears of a pandemic deepen. (ABDEL GHANI BASHIR/AFP via Getty)

Already reeling from slumping oil prices, the kingdom also risks losing billions of dollars it earns annually from religious tourism as it tightens access to the sites.

Its management of the crisis also shines a spotlight on the Saudi role as the custodian of the holy sites — a pillar of its political legitimacy.

State media has published a series of endorsements by Islamic bodies — from the grand mufti of New Zealand to Malaysia and beyond — which suggest “a concern in Riyadh that such a move might be politicised and used against it,” Farouk told AFP.

Pro-Saudi observers have sought to deflect the focus onto the kingdom’s rivals, with some on social media provoking ridicule after they called the virus “the work of Qatar” or a conspiracy by Iran. 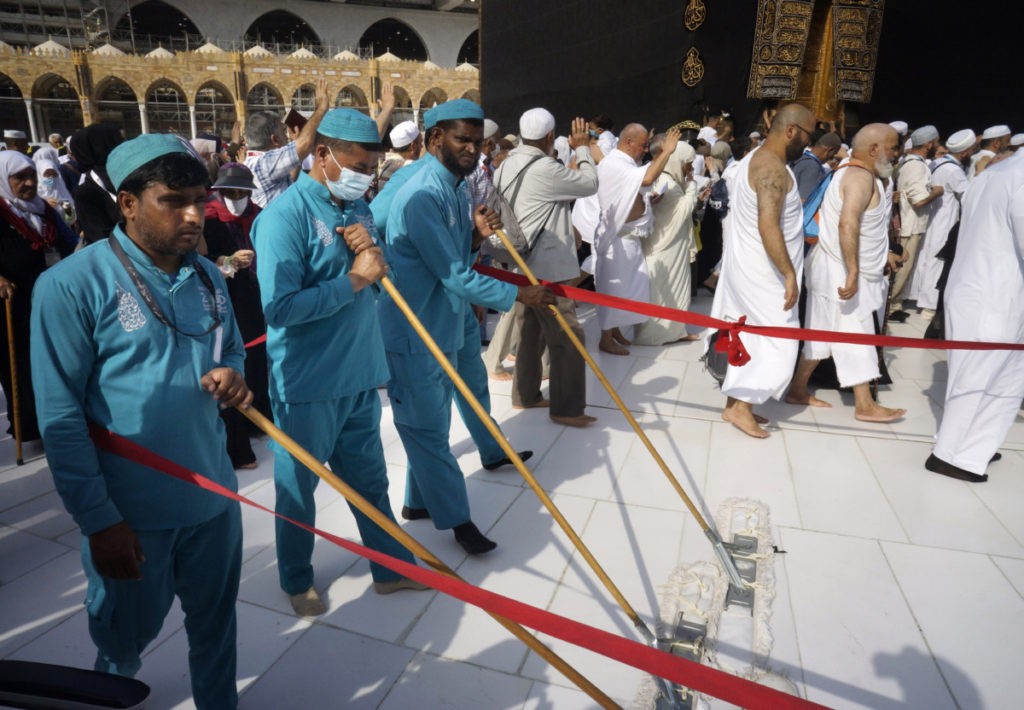 Workers sterilize the ground in front of the Kaaba, the cubic building at the Grand Mosque, in the Muslim holy city of Mecca, Saudi Arabia, Thursday, March 5, 2020. Saudi Arabia’s Deputy Health Minister Abdel-Fattah Mashat groups of visitors to Mecca from inside the country would now also be barred from performing the pilgrimage, known as the umrah. (AP Photo/Amr Nabil)

Authorities in Saudi Arabia, which on Wednesday reported its second case of the virus, did not respond to requests for comment.

Its measures stand in contrast to that of its regional nemesis Iran, which has struggled to contain the spread of coronavirus from its own Shiite holy sites as pilgrims and clerics appeared to defy health warnings.

“Saudi Arabia is trying to project itself as more responsible than Iran,” Umar Karim, a visiting fellow at the Royal United Services Institute in London, told AFP.

“But there is apprehension that its decision could reignite the political debate in the Muslim world about whether it should be the sole authority on the hajj and the two holy cities.”

The kingdom already appears wary of a potential conservative backlash from a liberalisation drive by Saudi rulers that has allowed what was once deemed un-Islamic — cinemas, concerts and mixed-gender parties.

Saudi Arabia has said its umrah restrictions are temporary but they have not gone down well with many pilgrims who endure years-long waiting lists and invest their life savings to make the trip.

One foreign pilgrim in Mecca told AFP last week that he would happily die a “martyr” if he got infected, rather than skip the pilgrimage.

The Indonesian embassy in Riyadh said it was appealing to Saudi authorities to permit its nationals to press ahead with their plans, after many voiced disappointment over the decision.

Religious tourism, vital to Saudi finances amid efforts to pivot away from oil, adds $12 billion to the economy every year, according to government figures. 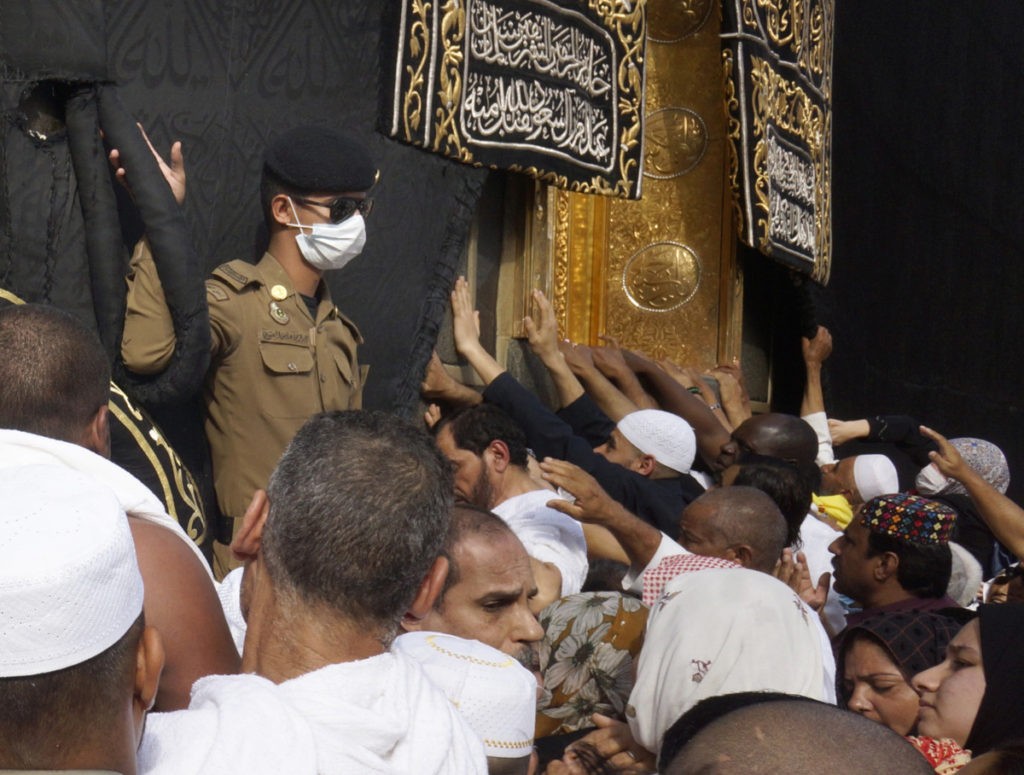 A Saudi policeman stands guard in front of the Kaaba, the cubic building at the Grand Mosque, in the Muslim holy city of Mecca, Saudi Arabia, Thursday, March 5, 2020. (AP Photo/Amr Nabil)

Capital Economics said the effects of curtailing the pilgrimage will be “substantial”, especially around the holy Ramadan period starting in April, seen as an auspicious period to undertake umrah.

“Perhaps the bigger impact would be felt if the restrictions are extended to the end of the July when the hajj — which accounts for around a quarter of total annual foreign pilgrims — begins,” the consultancy said.

The once free-spending petro-state is feeling the pinch of what one source close to the government called a “budgetary squeeze” as falling crude prices make it difficult to fund its ambitious economic diversification plan.

“Saudi ministries have been told they need to account for every penny they spend,” the source told AFP. 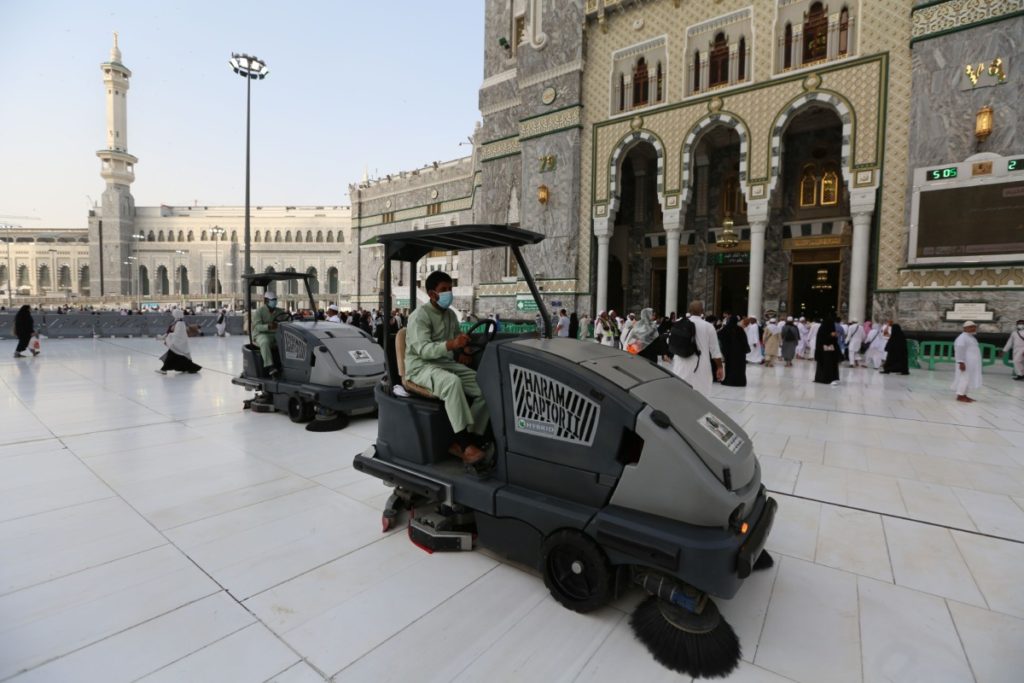