The radical New Israel Fund (NIF) has warned Israelis to turn off cellphones before attending anti-Netanyahu protests because they are used for “tracking purposes,” as well as instructing protesters how to act in the event of arrest.

A poster, made by the NIF-funded human rights group DocoRights and shared by NIF on its social media pages earlier this month, illustrates the do’s and dont’s for protesters.

“Summer is burning and so is the street,” NIF wrote in the text accompanying the poster.

“It seems that this summer is going to be particularly hot, with quite a few demonstrations and protests. When the Public Security Minister [Amir Ohana] calls the demonstrators ‘agents of chaos,’ it is clear that the demonstrators are expected to have confrontations with police forces.” 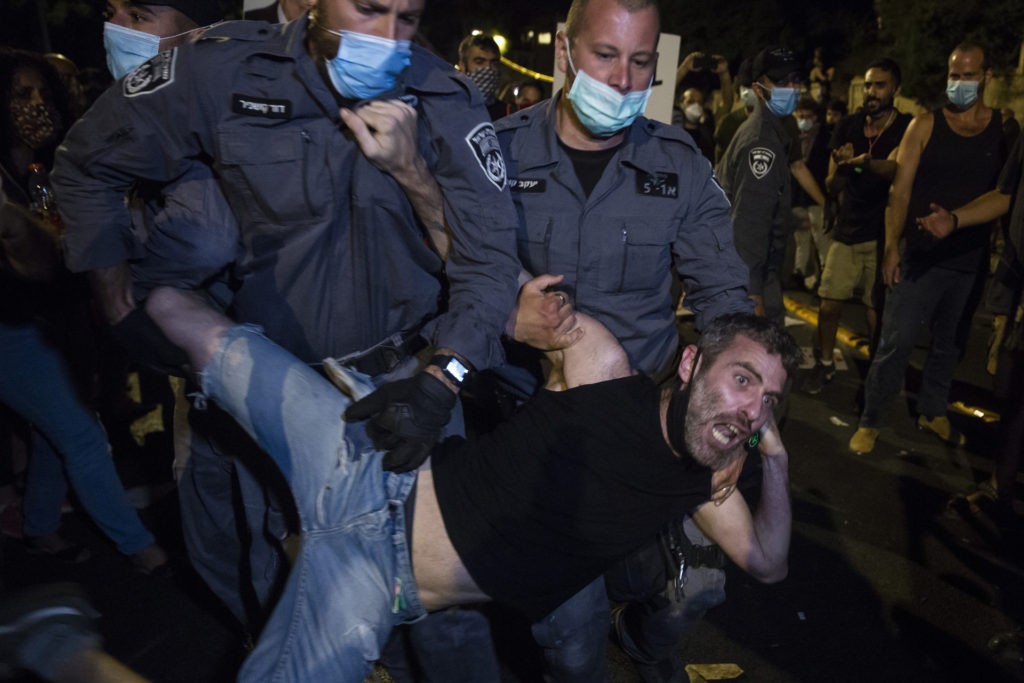 Police officers detain a protester during a demonstration on July 25, 2020 in Jerusalem, Israel. Over several weeks, thousands of protesters have taken to the streets of the capital to protest about the government’s handling of the coronavirus outbreak, as the country suffers a second wave of infections. Israeli Prime Minister Benjamin Netanyahu is also facing criticism for staying in office whilst facing corruption charges. (Photo by Amir Levy/Getty Images)

A day before NIF wrote the post, Ohana called the demonstrators “agents of chaos seeking to sow panic and venom in the public” and who were instigating “anarchy.”

Ohana further claimed that even the “incitement” against late prime minister Yitzhak Rabin before his assassination paled in comparison to the threats against Prime Minister Benjamin Netanyahu.

Alongside the sketch of a cellphone tower, the poster warns their cellphones are being used to track them. The Shin Bet security agency has been tracking confirmed carriers of the coronavirus in its contact tracing program.

The NIF’s post recommends that protesters turn off their phones or put them in flight mode, as well as disabling all biometric ID.

The poster further includes a sketch of a tattoo and warns all protesters to cover up any identifying features including tattoos.

Protesters are also told not to bring any weapons or drugs or other items which would be unwise to have on one’s person “in the event of arrest.”

And in the event of arrest, the poster reminds protesters to know their rights and refuse to speak to investigators and to demand a lawyer.

NIF has been accused in the past of appropriating popular protests, even by the protest organizers themselves.

Some of the organizations behind the latest wave of anti-Netanyahu protests are funded by NIF. These include “Zazim” and “Omdim Yahad” (Standing Together.) According to Israeli daily Israel Hayom, Zazim is behind of the placards equating the Netanyahu government to the coronavirus. In 2018, Zazim received a donation of NIS 662,267 ($192,875) from the New Israel Fund.

On its Facebook page, Omdim Yahad said its fighting “for a comprehensive alternative to the Right.” According to Israeli watchdog group NGO Monitor, in 2017-18 the New Israel Fund donated NIS 681,000 ($198,330) to Omdim Yahad. 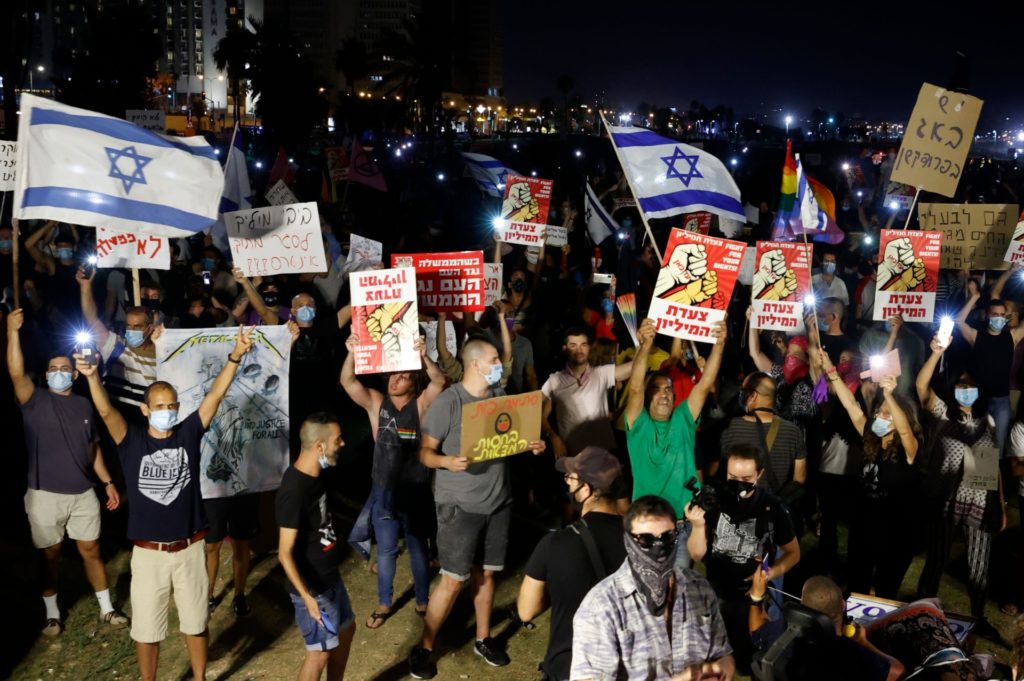 Protesters clad in masks stand holding up signs and waving Israeli and rainbow flags during a demonstration against the Israeli government in the Mediterranean coastal city of Tel Aviv on July 25, 2020. Protests against economic fallout from the coronavirus pandemic have spread across the country, with demonstrations outside Netanyahu’s residence becoming a regular event. (Photo by JACK GUEZ/AFP via Getty Images)

Netanyahu himself has asserted in the past the NIF “receives funding from foreign governments and elements hostile to Israel, such as George Soros’ funds.”

According to Netanyahu, the NIF seeks to eradicate Israel’s Jewish character.

“The primary aim of the NIF is to erase the Jewish nature of Israel and to turn it into a state of all its citizens next to a Palestinian state without any Jews on the 1967 border with its capital as Jerusalem,” he wrote on his Facebook in 2018.

He added that, NIF “endangers the security and future of the State of Israel as the nation state of the Jewish people.”

Hacked emails document Soros’ Open Society Foundations provided the NIF with at least $837,500 from 2002 to 2015. Breitbart News found that NIF’s 2015 annual report lists the Tides Foundation as a donor. Tides is a far-left financing clearinghouse that itself is heavily funded by Soros’ Open Society nonprofit.
Breitbart News found the Soros-backed NIF in turn finances scores of far-left groups. 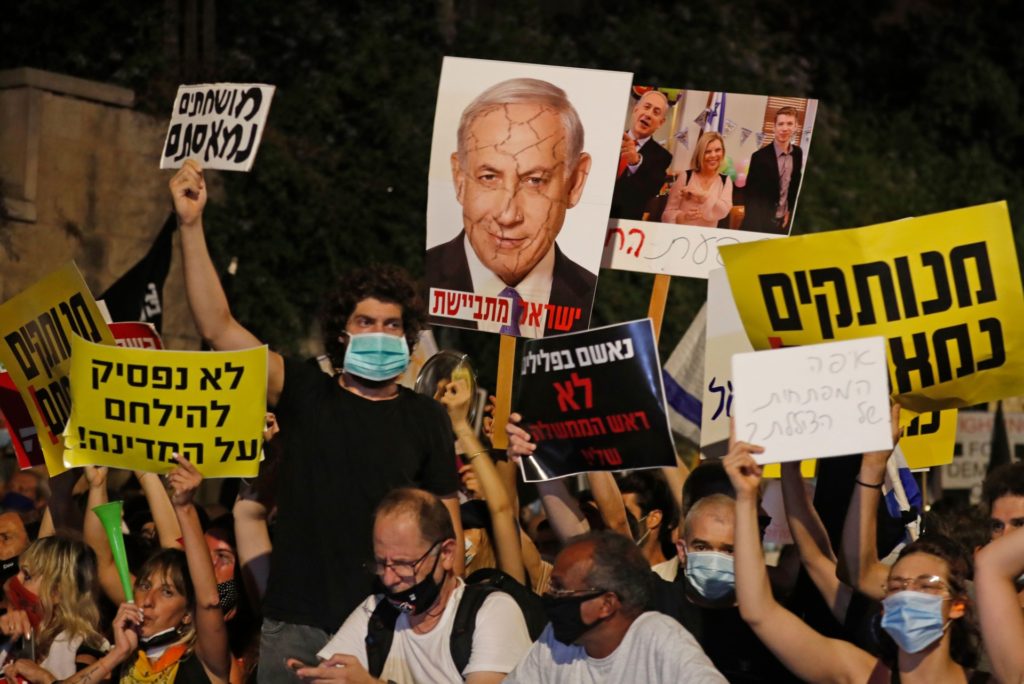 Israeli protesters hold placards during a demonstration against Prime Minister Benjamin Netanyahu in Jerusalem, on July 23, 2020. (Photo by AHMAD GHARABLI/AFP via Getty Images)