Lyon (AFP) — An Armenian association in France expressed outrage Sunday after a memorial centre to the mass killings of Armenians in the Ottoman Empire was defaced with pro-Turkish slogans.

The incident in the town of Decines-Charpieu outside Lyon comes against a background of intense communal tensions in France between its Armenian minority and the Turkish community over the conflict in Nagorno-Karabakh.

Turkey has strongly backed its ally Azerbaijan in the conflict during the last weeks over Nagorno-Karabakh, part of Azerbaijan but controlled by Armenian separatists since a 1990s war as the Soviet Union broke up.

The National Armenian Memorial Centre was daubed with the giant letters “RTE” in yellow paint in reference to Turkish President Recep Tayyip Erdogan and the words “Grey Wolves”, a prominent Turkish nationalist movement, in French.

A nearby memorial to the killings was also smeared with an expletive against Armenia.

“This intolerable desecration.. is one of a series of events aimed at terrorising and intimidating French citizens of Armenian origin,” the Committee for the Defence of the Armenian Cause (CDCA) said in a statement.

The Lyon region is home to one of France’s largest communities of Armenians, centred around Decines-Charpieu. 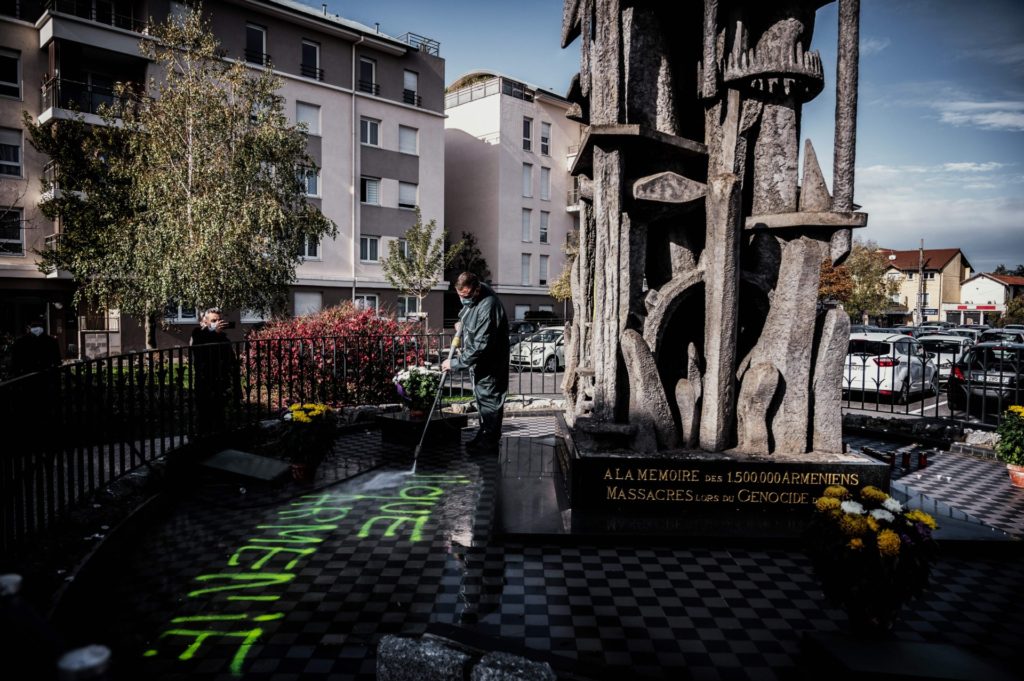 A man cleans the memorial for the Armenian genocide in Decines-Charpieu, near Lyon, on November 1, 2020 where pro-Turkish yellow letters graffiti tags have been painted overnight. Inscriptions reads “Fuck Armenia”. An outside wall of the nearby National Armenian Memorial Centre have also been tagged with the words “RTE” which can refers to Turkish Prime minister Recep Tayyip Erdogan, and “Grey Wolf” (Loup Gris), the name of an ultra-nationalist movement in Turkey. (JEFF PACHOUD/AFP via Getty Images)

Four people had been wounded on Wednesday in clashes between suspected Turkish nationalists and Armenians who had been protesting against Azerbaijan’s military offensive.

The CDCA accused the French state of “passivity” in the face of the threat and the mayor of Decines-Charpieu, Laurence Fautra, said its Armenian community needed physical protection.

The region’s top local official, prefect Pascal Mailhos, wrote on Twitter that he “strongly condemned” the damage to the memorial centre and vowed everything would be done to find those behind it.

Armenians have long campaigned for the mass killings of their ancestors in the Ottoman Empire during World War I to be recognised as genocide.

France is one of several countries to have recognised it as such.

Modern Turkey strongly rejects the use of the term, saying lives were lost on both sides during a time of war.