Israel on Sunday rolled out the second stage of its vaccination drive, the world’s fastest, with Prime Minister Benjamin Netanyahu announcing people over the age of 60 — of which 72 percent have received the first dose —  would receive a booster shot while the over-50s would receive the initial dose.

Some 19.5 percent of the population have been vaccinated, the Health Ministry said.

Speaking from Ben Gurion Airport, Netanyahu hailed  “a great day for Israel” as a shipment of 700,000 Pfizer vaccines arrived.

According to the Israeli premier, starting from Monday, some 170,000 Israelis would be vaccinated per day.

“Tonight we will sit down with the health funds and gear up for the next stage of the vaccination drive,” he said. 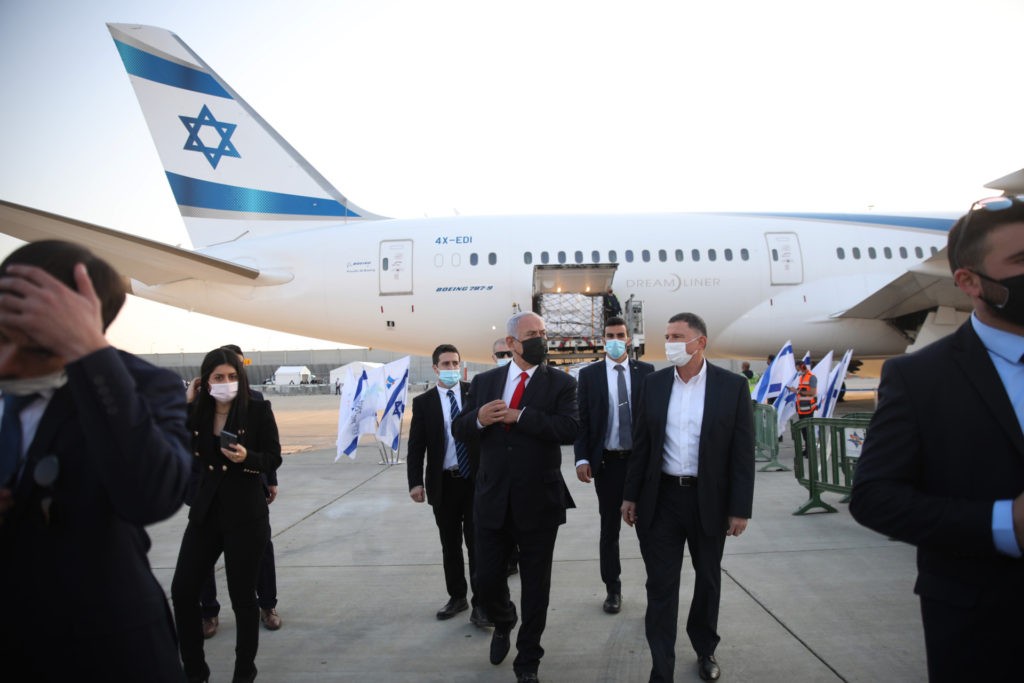 Israel’s Prime Minister Benjamin Netanyahu (C-L) and Health Minister Yuli Edelstein (C-R) attend a ceremony for the arrival of a plane carrying a shipment of Pfizer-BioNTech anti-coronavirus vaccine, at Ben Gurion airport near the Israeli city of Tel Aviv on January 10, 2021. Netanyahu announced earlier this week that he had signed a deal for enough doses of the Pfizer-BioNTech vaccine for all Israelis over 16 to be innoculated. (MOTTI MILLROD/POOL/AFP via Getty Images)

Netanyahu added: “We will have a really happy Passover.” This year the seven-day Jewish holiday falls at the end of March.

Netanyahu said Pfizer will send vaccine shipments “one after the other in order to complete vaccinating the entire adult population of Israel above the age of 16 by the end of March.”

“We will be the first country to emerge from the coronavirus,” Netanyahu said. “We will vaccinate all relevant populations and anyone who wants to can be vaccinated.”

Israel’s vaccination rate is by far the fastest compared to the rest of the world, according to the Our World in Data website. However, the country has also surpassed the U.S. and most of the world with the rate of daily new infections.

The country is in its second week of lockdown but beginning on Friday, a much harsher lockdown was imposed to include the shuttering of schools.