President Reuven Rivlin on Monday received the credentials of the first-ever ambassador to Israel from the United Arab Emirates, following the Trump-brokered Abraham Accords normalizing ties between the two countries.

UAE Ambassador Muhammad Mahmoud Al Khajah was welcomed with a red carpet and a visibly moved Rivlin who told him in Arabic the whole nation was excited to welcome him.

“The entire Israeli people welcomes you with joy. This will be your most important mission – to welcome the hands reaching out to you, to meet the Israeli people and to get to know them up close. Treaties are signed by leaders, but real, sustained peace is made between peoples, face to face,” Rivlin said.

During the ceremony, the Israeli military’s band played the national anthems of both countries.

Rivlin said it was personally moving for him in light of his late father’s love of the Arabic translation and his “lifelong work translating the Holy Quran into Hebrew.”

“My father’s house, not far from here in Jerusalem, was filled with Jewish, Muslim and Christian scholars, who learned from each other and imagined a future of partnership, mutual respect and peace between the sons and daughters of Abraham,” he told the UAE envoy.

“In this home I learned that we, the people living here, were not doomed to live together, but destined to do so on this land, to build it, develop it and lead it to a time of peace and prosperity.” 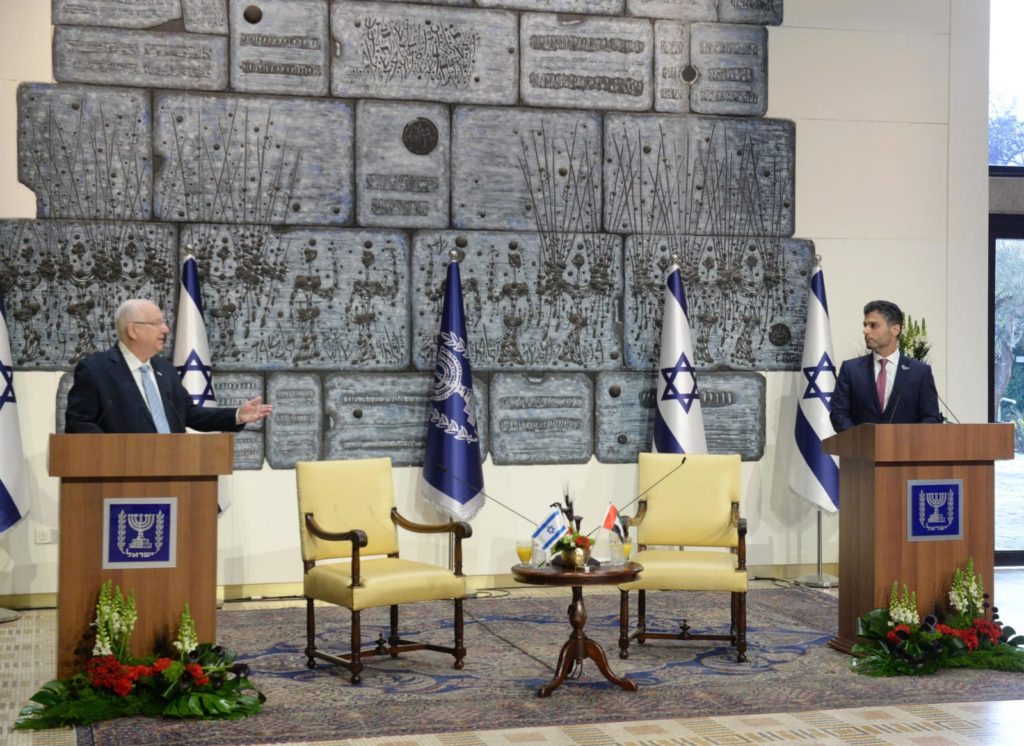 “Our two countries share this ethos – a small people that wish to turn arid land into a blooming garden, against all odds,” Rivlin said.

“We have nurtured the relations between us for some time, believing that if we waited patiently the time would come when we could take them one step further and deepen the friendship between us and make it public,” he went on.

“Thanks to brave and wise leadership, we are fortunate enough to see this wonderful day when the Emirati flag flies beside the Israeli flag over Beit HaNasi, the home of the Israeli people.”

Al Khajah affirmed he would work to strengthen culture, business and education ties between the two countries.

“Our two countries have the largest and most important economies in the region,” he said.“I will make every effort to make these relations ever tighten, to close the gap between the two countries and their people.

“The vision which begins today is one which seeks a more flourishing, more stable future.”

“The two nations have a shared mission: to establish peace and security throughout the region,” he went on, before adding he was “very proud and honored to be the first Emirati ambassador to the State of Israel.”

“My mission here is to foster and develop this relationship,” he said. “We hope this will bring peace and prosperity to the people of the Middle East.”