The news about John Kerry is startling. The former U.S. senator from Massachusetts and secretary of state, now President Joe Biden’s climate czar, is accused of leaking sensitive—possibly classified—information to an enemy power, Iran.

The accusation surfaced in a news story about the supposedly off-the-record comments by Mohammad Javad Zarif, Iran’s foreign minister, made in March to an Iranian journalist, who recorded the conversation in a three-hour audio file. Zarif’s words were leaked to a London-based Iranian publication called Iran International, and then the New York Times ran with the story on April 25.

While offering a candid commentary about an internal power struggle in Iran, Zarif made an interesting aside about information he received from John Kerry, as the Iranian news site explained:

The audio file received by Iran International contains only one brief sentence from Zarif, where complaining about the power of the Revolutionary Guard over Iran’s foreign affairs he asks rhetorically, “Should Kerry tell me that Israel has conducted more than 200 attacks [air strikes] against us in Syria?”

Zarif does not say when Kerry made the remark — during his tenure as secretary of state or after the Trump administration took office. This would make a big difference if Kerry were to stand accused of divulging intelligence to Zarif. As Secretary, it would sound perhaps part of a diplomatic dialogue, where Kerry could be questioning Iran’s deep involvement in the Syrian war. But if he is having a conversation with Zarif as a private citizen, with some access to US intelligence, and is discussing sensitive matters, it could be both ethically and perhaps legally an issue for him.

If Zarif’s comment is to be believed, America’s top diplomat was voluntarily sharing information that could potentially be harmful to Israel.

The Times story alleges that Zarif was hearing Kerry’s words “to his astonishment,” but it’s unclear if he was astonished that he had to learn this information from Kerry instead of his own government or if he was astonished that he had learned it from Kerry at all. Obviously, the news that the Israelis had attacked Iran was not surprising—after all, the mutual hostility between the two countries is well known.

Still, it’s one thing for the Iranians to suspect that the Israelis have attacked them; it’s quite another for Israel’s biggest ally to confirm those suspicions and to give them voice. Moreover, we don’t know if there was any sort of follow-up from Kerry — a follow-up that could perhaps compromise American or Israeli intelligence sources and methods. 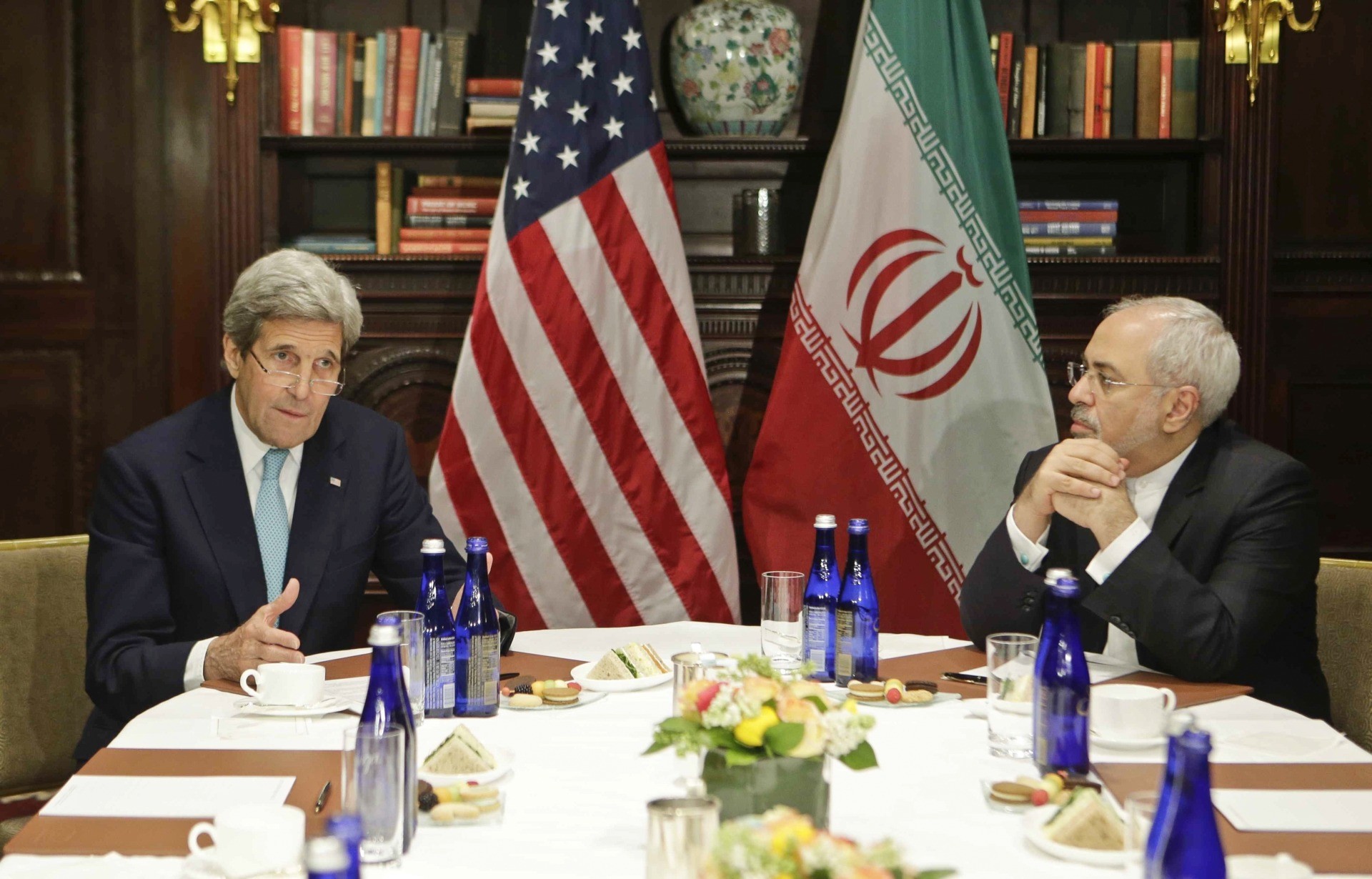 Zarif’s comments have yet to be fully vetted, and yet they nevertheless have the ring of truth, since Zarif was clearly speaking in private and never intending for his words to be publicized or at least not any time soon. In fact, the Iranian regime has confirmed that the interview occurred and that the leaked remarks are real, only managing to complain that the three hours of audio were “cherry-picked” from a seven-hour conversation.

In some quarters, the reaction to the Zarif-Kerry allegation has been swift and strong: Sen. Dan Sullivan (R-AK), a member of the Senate Armed Services Committee—and no hair-trigger headline-grabber—was moved to say, “People are talking about treason—and I don’t throw that word around a lot.  John Kerry does all kinds of things that I can’t stand.  But this is the one that broke the camel’s back.” Indeed, Sullivan later called upon Kerry to resign from his current climate post. And as Breitbart News has reported, other Republicans, too, were demanding Kerry’s resignation or dismissal.

It must be noted that Kerry stoutly denies the allegation, and yet as The Federalist’s Mollie Hemingway noted in a tweet, “Biden administration had originally claimed it was no big deal because information that was allegedly revealed was actually public information.  Now Kerry claims it never happened.”

Biden administration had originally claimed it was no big deal because information that was allegedly revealed was actually public information. Now Kerry claims it never happened. https://t.co/4AQa43STYz

So when we’re faced with a situation of unresolved questions, what should we do? How to get to the truth? One answer, often favored by both Democrats and the Main Stream Media, is to launch an independent investigation. You know, the way that the Democrats and the MSM demanded an independent investigation of Donald Trump’s relationship with Russia in the middle of the last decade.

Perhaps you, dear reader, remember “Russiagate”: all the accusations, all the headlines, all the millions of dollars and man-hours from Robert Mueller and his special counsel investigation.

So will Kerry now get the same treatment as Trump? Will investigators subpoena him and all his associates, seeking to nail down who—Kerry or Zarif—is telling the truth? Will diggers dig to find out whatever other disclosures might have been made to Iran?

We know the answers to those questions: Not if the Democrats and the MSM can help it.

And in fact, the Democrats and the MSM have a good track record of fending off unwanted investigations. To illustrate, we might delve back into recent American history to see their effectiveness at information-obfuscation. Indeed, this demonstrated ability to squash an inquiry should give Kerry comfort.

Interestingly, that past incident concerned another top Democrat from Massachusetts, and so that precedent should make Kerry feel even more comfortable. Still, it’s an interesting and sordid tale worth recollecting.

A Parallel from the Past

Back in 2010, investigative journalist Kevin Mooney recalled the sneakiness—some would call it treasonous—committed in the early 1980s by Sen. Edward M. Kennedy (D-MA) and a close friend, former Sen. John Tunney (D-CA).

Back in 1983, Kennedy dispatched Tunney, whom a KGB spy memo described as Kennedy’s “close friend and trusted confidant,” to deliver a message to Moscow; the message was that the the Russians should work with Democrats, and not the Republican president at the time, Ronald Reagan, to advance the joint interests of Democrats and Russians.

Tunney explained that if the Soviet Union played ball with him, then American liberals in the media would repay the favor by showcasing favorable coverage of the communist empire and its leader, Yuri Andropov. 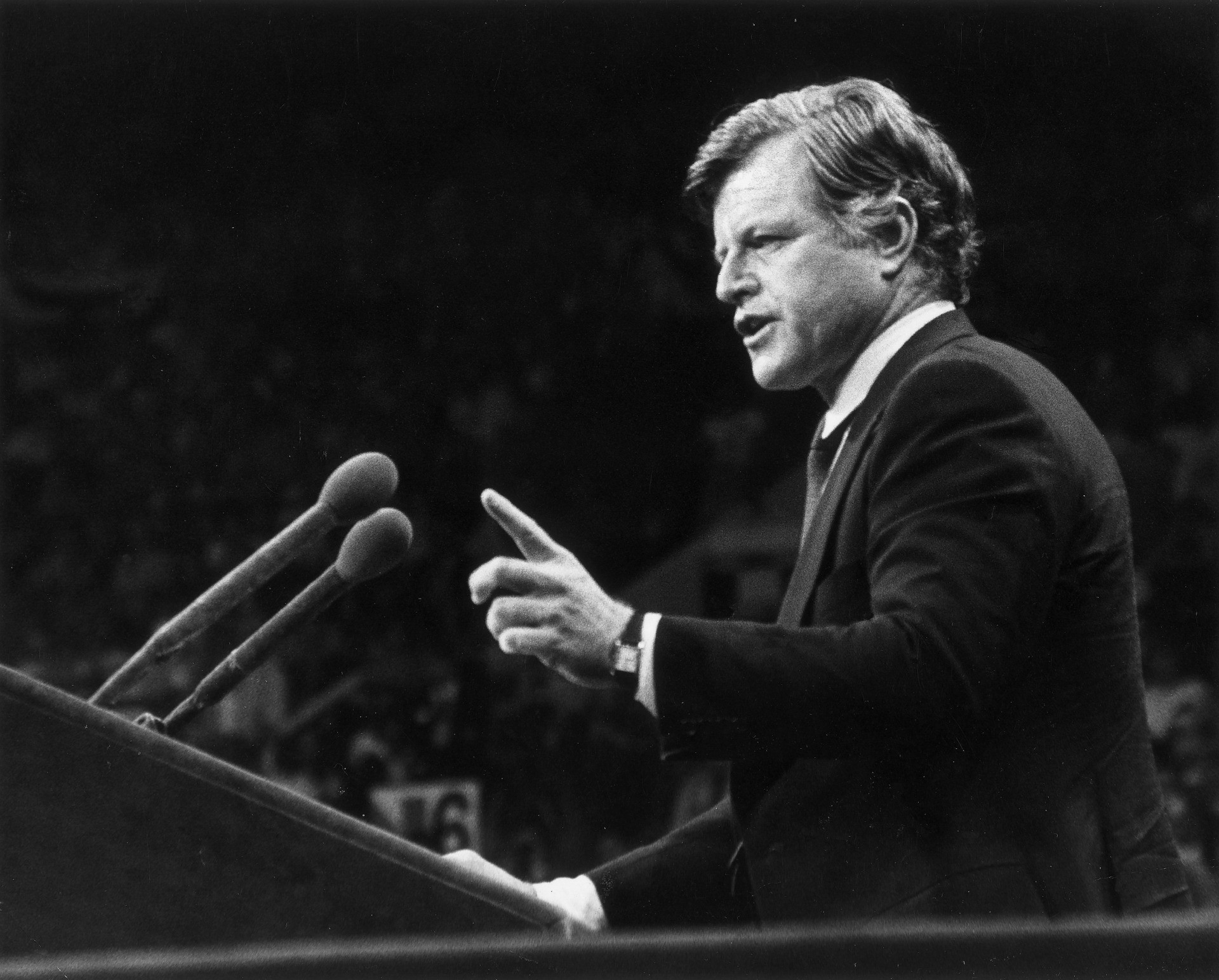 Sen. Ted Kennedy (D-MA) speaking at the Democratic convention in New York shortly after being defeated by President Jimmy Carter for the 1980 Democratic presidential nomination on August 12, 1980. (Keystone/Getty Images)

The memo, written by KGB chief Viktor Chebrikov, laid out some of the Democrats’ motivations: “Senator Kennedy . . . is very troubled by the current state of Soviet-American relations.” The KGB man continued, laying out an argument that showed the mind-meld between Kennedy and the Kremlin:

Events are developing such that this relationship coupled with the general state of global affairs will make the situation even more dangerous. The main reason for this is Reagan’s belligerence.

So we can see that Kennedy and the Soviets were in agreement that the key concern was Reagan’s “belligerence.”  Moreover, Chebrikov added, “According to Kennedy, the current threat is due to the president’s refusal to engage in any modification of his policies.”

Yet in the meantime, Chebrikov continued, the Massachusetts senator wanted to prepare the field by showing that Reagan was the problem, not the Russians: “Kennedy and his friends will bring about suitable steps to have representatives of the largest television companies in the USA contact Y.V. Andropov for an invitation to Moscow for the interviews.”

The goal, of course, was to make the Soviets look good while making Reagan look bad. By this argument, if only Reagan could be gotten rid of, and a Democrat such as Kennedy installed in the White House instead, all would be well with the world.

Kennedy’s actions occurred at the expense of presidential authority and in violation of federal law, according to academics and scholars who are familiar with the documents.

Yet the actions of Kennedy and Tunney were not revealed until decades after they happened. And yet even when they were revealed, the MSM reaction was a non-reaction.

So now we can see why John Kerry should be optimistic about skating past the Zarif revelation. Yes, many Republicans and conservatives are hopping mad, but today the Democrats control not only the MSM, but also the Congress—and so no Congressional committee is likely to probe Kerry.

That Congressional apathy could change if Republicans take over either the House or the Senate next year, and yet as long as Democrats are in charge on Capitol Hill, Kerry can breathe easy.

As Teddy Kennedy demonstrated during the course of his half-century career, Democrats can get away with a lot.