Israel struck four Hamas weapons facilities in the Gaza Strip late Saturday evening in response to a shooting attack that critically wounded a border police officer during violent riots on the border.

Dozens of Palestinians were also injured during the riots, which were organized by the Gaza-ruling Hamas terror group and other local Palestinian terror groups.

A video shared widely on social media showed 21-year-old Barel Hadaria Shmueli, from central Israel, shot at point-blank range by a Palestinian rioter who had put his gun in a hole on the border wall. Other rioters tried unsuccessfully to snatch Shmueli’s gun away.

“The Hamas terrorist organization continues to lead the Gaza Strip towards terror while exploiting the civilian population,” the army said in a statement. 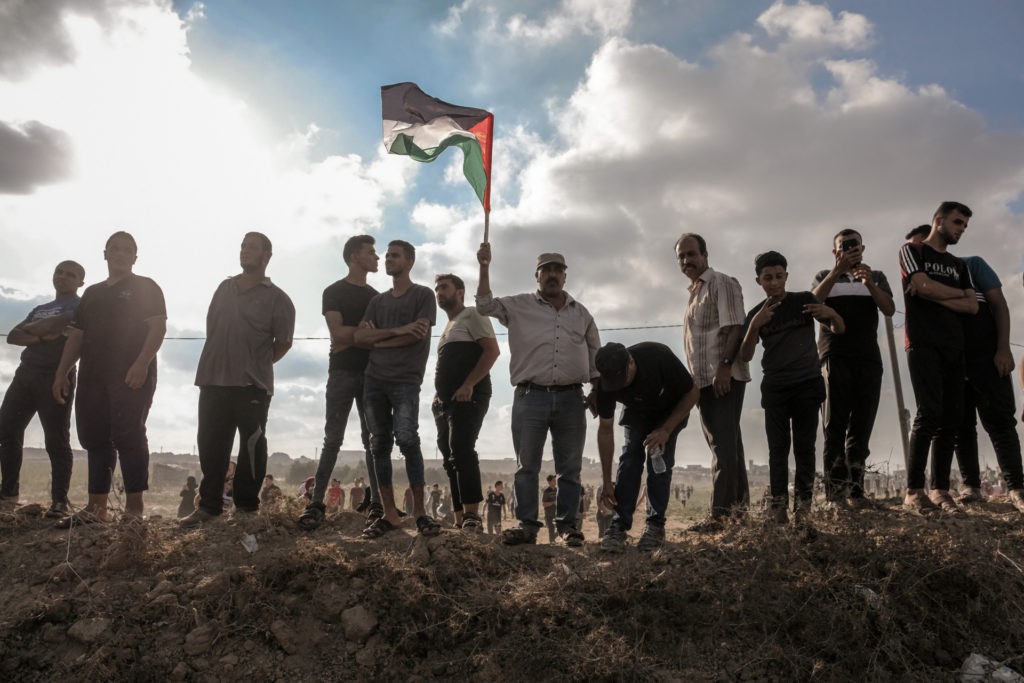 Palestinian protesters take part in a demonstration at the border fence with Israel during a protest to mark the 52nd anniversary of the burning of Al-Aqsa Mosque on August 21, 2021 in Gaza City, Gaza. (Photo by Fatima Shbair/Getty Images)

Israel “will continue to respond strongly to terrorist attempts from the Gaza Strip and considers the Hamas terrorist organization to be responsible for everything that happens in the Gaza Strip,” it added.

Shmueli was evacuated to Soroka hospital in Beersheba and underwent an operation but was still in intensive care in a life-threatening condition, the army said.

He was a sniper in the elite undercover mista’arvim unit, a unit in which soldiers go undercover posing as Palestinians, and had taken part in “dozens of operations to foil terror attacks and crime in the southern region,” the military said in a statement that was translated by the Times of Israel.

Another angle of the incident on the Gaza border shows a Palestinian apparently shooting with a handgun through the hole in the border wall, before the others try to snatch the IDF soldier's rifle. pic.twitter.com/ko69mHH4QW

Palestinians fired heavy machine-gun fire at Israeli aircraft during the airstrikes, hitting several homes and vehicles in the southern Israeli town of Sderot. One teenager was evacuated to hospital after becoming injured while running to a bomb.