The weapons would likely be used in some capacity related to the nearly eight-year-old civil war in Yemen, where Saudi Arabia has intervened on behalf of the legitimate government against the Iran-backed Houthi terrorist organization that continues to control the capital, Sanaa.

As a presidential candidate, Biden was a loud critic of the Saudi government, promising to turn one of America’s most critical allies in the region into a “pariah” and condemning both Riyadh’s actions in Yemen and the brutal killing at the hands of Saudi officials of Jamal Khashoggi, an Islamist former Washington Post contributor.

Both Biden and the Democrats generally have largely stopped discussing the Khashoggi killing – once the focus of widespread left-wing condemnation of President Donald Trump, who was in office when it happened – and reports for weeks have indicated that Biden may ask Saudi leaders to expand their oil capacity to help America offset global oil market shortages caused by sanctions on Russia. Biden has steadfastly refused to allow American companies to expand their oil and gas capacity instead, despite America being home to the world’s largest known oil and gas reserves.

The White House has offered little clarity regarding what Biden could offer the Saudis – currently enjoying a thriving economy as oil prices soar – in exchange for increasing oil capacity, as Biden has repeatedly insisted that resolving the oil crisis is not why he is visiting the country. The Reuters report indicates aiding Saudi Arabia with weapons sales could be on the table.

Biden plans to visit Saudi Arabia, according to reports, despite vowing to treat them as a "pariah." https://t.co/BjtMTdLVnt

“Among the biggest-ticket items the Saudis would likely seek are precision-guided munitions (PGM) such as those approved under former President Donald Trump in the face of objections from members of Congress,” Reuters observed in its report. “But the Biden administration is expected to move cautiously as it discusses which systems might be offered, two sources said.”

The anonymous sources claimed that Biden would demand some “progress” in resolving the Yemen civil war before resuming the weapons sales.

Reuters noted Biden only blocked “offensive” weapons sales and the United States has been open to selling defensive weapons throughout Biden’s tenure, going as far as to support selling Riyadh an advanced “Terminal High Altitude Area Defense (THAAD) system” like the one South Korea agreed to purchase from the United States in 2016 to protect from North Korean attacks.

North Korea and South Korea – and their allies, China and America, respectively – remain in a technical state of war despite the Korean War’s active hostilities period ending in 1953. 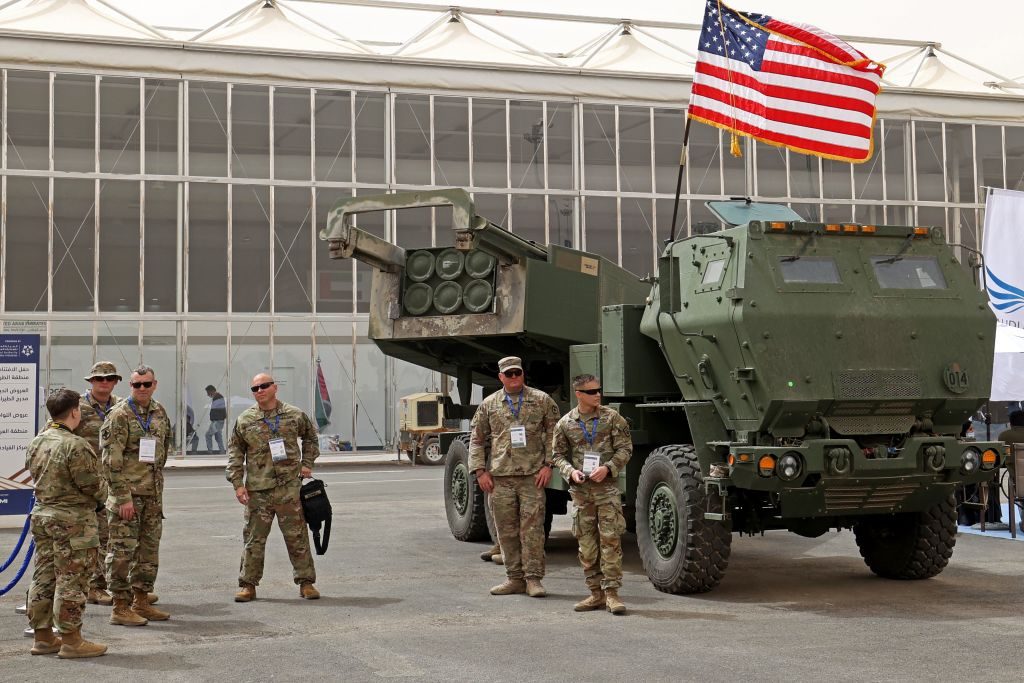 Biden is scheduled to arrive in the Middle East on Wednesday, visiting Israel first and flying from Israel to Saudi Arabia on Friday.

According to the United Arab Emirates’ (UAE) The National, Biden is scheduled to meet with both Saudi King Salman and the nation’s crown prince and de-facto ruler, Mohammed Bin Salman, commonly referred to by his initials, MBS.

Given the strained relations between America and Saudi Arabia under Biden and skyrocketing gas prices at home, the announcement that Biden would abandon his quest to turn Saudi Arabia into a “pariah” state internationally and meet with its leaders was largely interpreted as a ploy to buy more Saudi oil or convince the country to produce more for the international market, driving down prices.

Outside of news reports and analysis, French President Emmanuel Macron appeared to attempt to dissuade Biden from trying to convince Gulf states to produce more oil in a conversation in June caught on television.

Leaders from Saudi Arabia and the United Arab Emirates (UAE) have reportedly refused to take phone calls from President Joe Biden during the Ukraine crisis, after he snubbed them repeatedly during the first year of his administration. https://t.co/rWIOz8qySr

“I had a call with MBZ,” Macron said, referring to UAE President Mohamed bin Zayed Al Nahyan, during a conversation with Biden at June’s G7 summit. “He told me two things. One, I’m at a maximum, maximum what he claims. Second, according to MBZ, the Saudis can increase a little bit, by 150 (thousand gallons) or a little bit more, but they don’t have huge capacities at least before six months’ time.”

Biden has since repeatedly insisted he is not going to Saudi Arabia to request more oil production, but has struggled to explain what other reason he would have for the dramatic shift in tone from his stance on the country as a presidential candidate.

“No, I’m not going to ask them,” Biden insisted days after the Macron conversation, referring to the Saudis and oil production. “I hope we see them, in their own interest, concluding that makes sense to do.”

In an opinion column published in the Washington Post – Khashoggi’s former publication – titled “Why I’m Going to Saudi Arabia,” Biden failed to offer a concrete reason why he was going to Saudi Arabia, making the claim that visiting Riyadh would somehow help Ukraine fight off an ongoing Russian invasion that began eight years ago but only captured the international imagination in February.

“I know that there are many who disagree with my decision to travel to Saudi Arabia. My views on human rights are clear and long-standing,” Biden wrote in his article, “and fundamental freedoms are always on the agenda when I travel abroad, as they will be during this trip, just as they will be in Israel and the West Bank.”

The Saudis, Russians, and other members of the oil cartel have rejected President Joe Biden's request that they produce more oil to lower U.S. gasoline prices. https://t.co/0w1ptqAe5Z

“We have to counter Russia’s aggression, put ourselves in the best possible position to outcompete China,” the article continued, “when I meet with Saudi leaders on Friday, my aim will be to strengthen a strategic partnership going forward that’s based on mutual interests and responsibilities, while also holding true to fundamental American values.”

Biden also boasted that he would take a historic flight from Israel to Saudi Arabia – possible thanks to President Trump’s diplomacy thawing relations between Israel and its Muslim neighbors – and claimed that he sought to “reorient  – but not rupture –” ties to Saudi Arabia.

“I would make it very clear we were not going to, in fact, sell more weapons to them, we were going to, in fact, make them pay the price and make them, in fact, the pariah that they are,” candidate Joe Biden said during a Democrat primary debate in 2019. “There’s very little social redeeming value in the present government in Saudi Arabia.”