Jeff Bezos’ Washington Post is defending the hiring of Chinese graduates by American firms, despite the often-reported Chinese theft of commercial secrets and national security technology, and despite the salary-cutting impact on American graduates.

The article in Bezos’ Washington Post follows a New York Times scoop which revealed that President Donald Trump’s deputies want to make it more difficult for Chinese graduates in the United States to steal commercial secrets, such as potential disease-fighting drugs, or to steal military information, such as radar-defeating technology.

But the Washington Post article does not include any critical comments about the use of Chinese graduates, and instead allows business-first groups to defend the costly and risky practice:

Technology giants are urging President Trump to leave what they call a crucial talent pool out of the trade discord: Chinese workers.

Dean Garfield, chief executive of the Information Technology Industry Council, which represents Google, Facebook, Apple, Amazon and other companies, said its members are alarmed at reports the White House is considering a ban on Chinese citizens conducting high-tech research at American universities and businesses.

“We’ve heard from many, if not all, of our members,” he said, “that steps to limit access to talent have a direct negative impact on their ability to run their businesses.”

The article cites an estimate from the Migration Policy Institute that 36,000 Chinese graduates were hired in 2017. But many graduates stay for several years, so the resident population of Chinese graduates in jobs is likely higher than 100,000.

Many of the Chinese graduates work in U.S. biomedical and engineering laboratories, rather than in outsourced computer-related jobs. The inflow of cheap Chinese graduates has allowed top U.S. managers to run their laboratories like Cannery Row sweatshops, pushing many American women out of science careers.

The Washington Post article slid over the fact that the newspaper is owned by Jeff Bezos, who owns the Amazon network of companies.

Those Amazon companies import many foreign graduates for work in the United States, often via the H-1B outsourcing program. Most of the H-1B hires are from India, but all help reduce the demand — and the salaries — for American graduates.

This chart shows Amazon’s requests for H-1B visas in 2017: 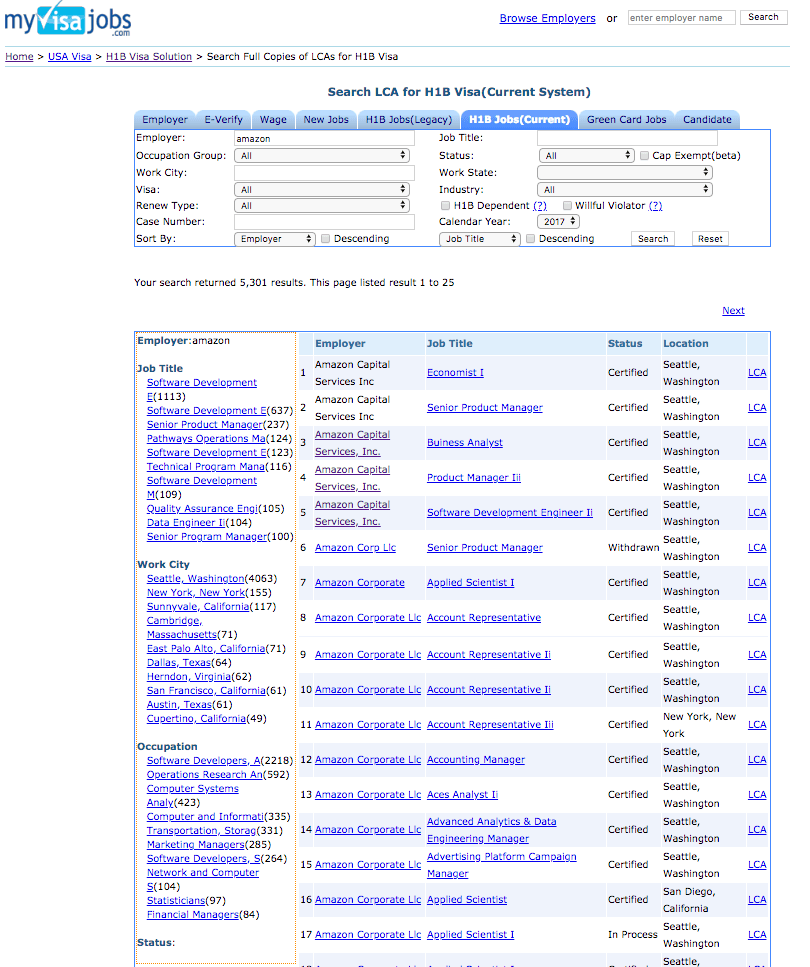 Trump’s deputies are also expected to announce a reform of the H-1B program prior to the November election. The reforms are strongly opposed by business groups who use the program to increase the supply of foreign graduates and so reduce salaries paid to Americans — but will be strongly supported by many white-collar voters.