The leaders’ risky focus on taxes was highlighted by election forecaster Charlie Cook, who told a mid-May meeting of GOP leaders:

that the tax cut did help among Republican voters, but helped only a little and temporarily among independents and did nothing with Democratic voters … The essence of what I said was that if they were going to rely primarily on the tax cuts to hang onto their majority, they were unlikely to succeed.

Cook’s comments were posted by Axios, which also reported that:

GOP leaders diverted attention away from migration by scheduling briefings from two pollsters who have long had close ties to pro-migration business lobbies. Axios reported:

Some were unimpressed by Cook’s presentation and felt that other pollsters who presented to the group — including Kristen Soltis Anderson and David Winston — gave compelling reasons to think messages of tax reform and economic growth would help them this year.

WASHINGTON – House Republican candidates are blanketing the airwaves with TV ads embracing a hard line on immigration — a dramatic shift from the midterm elections in 2014, according to a USA TODAY analysis of data from Kantar Media.

Republicans have aired more than 14,000 campaign ads touting a tough Trump-style immigration platform this year. The barrage underscores why House GOP leaders worry that passing a legislative fix for undocumented immigrants brought to the country as children, referred to as DREAMers, would put GOP candidates at risk heading into the fall election …

“Just about every survey I’ve seen shows that among Republican primary voters, immigration is one of the most important issues, if not the most important,” said Brian Murray, a GOP consultant based in Arizona. 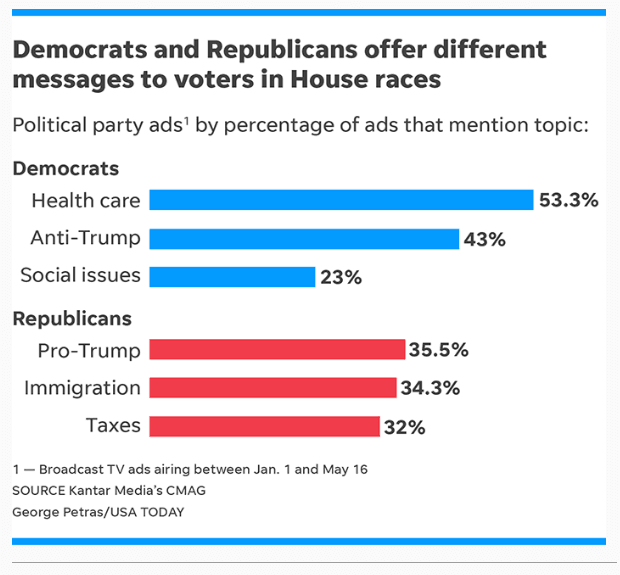 So far, most of the candidate advertising avoids a clash with donors by highlighting the crime problems about illegal migration or sanctuary cities — but not the damage caused to Americans’ wages by donor-preferred amnesties and cheap-labor.

Many polls show that the GOP candidates’ focus on immigration is a safer bet than the GOP leaders’ focus on tax raises.

For example, the 2018 Battleground Tracker poll by YouGov and CBS showed that 45 percent of likely voters say immigration has worsened their communities, while 42 percent said it had made no difference, and only 13.5 percent said immigration was good for their area. That’s a 31.5 point gap between those who say immigration is good or bad in these swing districts.

In contrast, the tracker poll showed tax issues have a minimal impact. Only 34 percent of independents said the tax-cut was good for them, while 18 percent said it was bad. That is a 16-point advantage, or half the 31.5 percent GOP-advantage in the immigration issue.

The tracker poll was conducted in late May poll. It included 5,923 registered voters in 64 districts, including the districts held by the GOP legislators who are pushing the amnesty-discharge petition. That means the poll included hundreds of registered voters in the districts of GOP Reps. Jeff Denham and Dave Valadao, plus Florida’s Chris Curbelo and Texas’s Will Hurd — and thousands of voters in districts held by the 23 GPO legislators who have signed the petition.

Only 9 percent of independents tagged taxes as one of the top three most important issues.

Pulse Opinion Research conducted a poll in Denham’s district of Jeff Denham, one of the loudest advocates for the amnesty petition, and also a beneficiary of the CLF funding. A no-strings amnesty matching Denham’s proposal was opposed by 60 percent of 545 likely voters — and by 50 percent of the roughly 220 Hispanics in the poll, which was funded by pro-reform group, NumbersUSA.

Nonetheless, GOP leaders are zig-zagging their way towards approving an unpopular amnesty for 2 million illegals via the discharge-petition process.

That is s a risky course, admitted Dehnam, the leader of the discharge-amnesty push. In a June 1 article published by the New York Times, Denham said:

This process is being pushed and funded by GOP donors, including donors who say they will close their checkbook to the leaders unless they more cheap workers via an amnesty.

The GOP legislators who support the discharge petition echo the donor’s business-first policy. For example, Florida Rep. Carlos Curbelo told the Washington Post that “the party should stand for an immigration system that complements our economy, that is compassionate to the victims of illegal immigration.”

In contrast, Trump was elected by GOP voters who want pro-American immigration reform, not the current business-first immigration rules.

Despite the views of voters and the President, House speaker Paul Ryan is convening a caucus meeting on June 7 to talk about the discharge-petition amnesty. But Ryan has the authority to block the amnesty vote by simply declaring the House is not in session on the two days allowed for the vote, June 25 and July 23.

Ryan’s deputies at the National Republican Congressional Committee are ignoring the immigration issue in the 2018 election. Instead, the committees’ ads and funding-pitches are dominated by praise for tax cuts and by threats about a return of Rep. Nancy Pelosi to the Speaker’s chair.

For example, a May 27 fund-raising pitch from Ryan said:

You – the American people – DESERVE a House that will work with President Trump to continue to grow this economy, create jobs, and make things better for the American people. After all, this is the agenda you voted for. We already know what Nancy Pelosi and her far-left allies bring to the table: obstruction, higher taxes, and failed big government policies.

This is Nancy Pelosi’s last stand. She is trying everything to ensure she becomes Speaker. If she fails, her fellow Democrats will turn on her to save themselves.

From April 24 to June 4, the NRCC’s Twitter account cited Pelosi 26 times and taxes 50 times — but did do not mention immigration or amnesty even once.

✅ More raises and bonuses thanks to #taxreform… This time for Dollar Tree employees! https://t.co/p7s0SbxiRh pic.twitter.com/VqRasKGKWp

“The messaging is simple: If we don’t vote for Republicans, Nancy Pelosi and the Democrats are going to regain control of the House and be able to enact a very liberal, progressive agenda.”
https://t.co/DVg7pQ0wnU

Over the past two years, President Trump has fought to advance conservative values, cut taxes, and strengthen our economy. He is helping get hard-working Americans back on their feet, and we think he should have an abundance of signatures that reflects gratitude for his successful conservative agenda.

But the issue of lower immigration and higher wages is pushing its way to the front of voters’ attention, Don Trump, Jr. told Breitbart News radio. “The forgotten men that we campaigned on—they’re getting the real benefit” via rising wages, he said, adding:

They’re getting better wages. There’s more demand for their work. They’re able to do that. They’re able to support their families better. That helps their family structure. Everything—I mean, this is what we campaigned on. This is what my father ran on. This is helping the people in what was the forgotten land everywhere between New York City and Malibu that the Democratic Party establishment has forgotten about for decades.