The GOP legislator who is managing the House GOP’s 2018 campaign has drafted a letter urging President Donald Trump to suspend border enforcement while “families with children [are] immigrating to the United States.”

“We are concerned that policies allowing the separation of families are in direct conflict with America’s humanitarian responsibility and our nation’s history of protecting those seeking safety,” says the draft letter from Ohio Rep. Steve Stivers, who heads the donor-funded National Republican Congressional Committee. It continues:

There may be rare instances which justify federal enforcement to separate a parent from their child … [but] We believe there is nothing more important than family, and especially in protecting the well-being of children.

Stivers’ draft letter is addressed to three of Trump’s cabinet secretaries and it was circulated to GOP legislators in the House in the hope of collecting signatures. It was provided to Breitbart News and has not been released.

The letter focuses on the needs of foreign migrants. It does not mention Americans’ families, Americans’ children, Americans’ parents, Americans’ jobs, Americans’ schools and Americans’ civic society, all of which would be damaged if the federal government allows a wave of child-led migration by huge numbers of people from Central and South America, Africa and Asia.

Stivers office did not respond to questions from Breitbart News.

The lurch by Stivers and the GOP leadership towards open-borders comes amid a media-magnified elite revolt against popular border-enforcement laws.

The House leadership is trying to navigate between the pro-American views of the party’s base and the soft-Republican views of many suburban voters. Those compromise-minded voters are vital because they can elect or reject Republicans in the swing-voting districts which will decide which party has a majority in the House.

The many GOP donors who fund Stivers’ 2018 campaign oppose wage-boosting immigration reforms and they argue that the soft-Republicans will be alienated by Trump’s clear pro-American views. 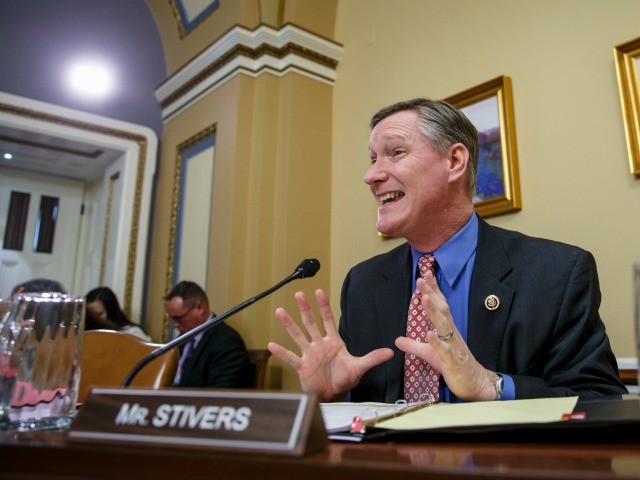 The Stivers letter suggests that Trump adopt an open-borders policy to all migrants who bring children with them as they migrate into jobs and schools throughout the United States, and it suggests that the establishment GOP leadership wants to help foreigners migrate into U.S. jobs and communities. The letter says:

The letter does not mention that the vast majority of migrants coming across the border are economic migrants in search of jobs. Instead, the letter uses the term “immigrants” to describe illegal migrants as if they are following the legal procedures.

Stivers’ letter reflects the business-first views of the GOP leadership. Those views were front-and-center in the talking-points issued to GOP legislators about the House Speaker Paul Ryan’s pending amnesty bill by Rep. Cathy McMorris Rodgers, chairwoman of the House Republican Conference. She instructed her fellow GOP legislators to defend Ryan’s amnesty from voters’ criticism, saying:

Trump’s effort to limit legal and illegal immigration is driving up wages and salaries for Americans in various locations and careers around the country. The beneficiaries include African-American bakers in Chicago, Latino restaurant workers in Monterey, Calif., disabled people in Missouri, high schoolers,  resort workers in Hilton Head, construction workers, Superbowl workers, the garment industry, and workers at small businesses, and even Warren Buffett’s railroad workers.

That demand for more imported labor and consumers is a central goal of the donors who are funding the group of GOP politicians who signed the discharge-amnesty list and forced the creation of the “moderate” immigration bill.

Curbelo’s donors include some of the Florida millionaires who have threatened to cut off donations until Ryan approves an amnesty. For example, Mike Fernandez’s MBF Healthcare Partners has donated $10,800 to Curbelo in the 2018 cycle. Fernandez’s pro-amnesty group includes several CEOs of agriculture and construction companies, and it frankly states that it wants more even migrants to serve as consumers and workers.

Lax border policies are a huge boon for these business groups. For example, President Barack Obama’s easy border policies allowed more than 400,000 migrants to get work permits because they claimed asylum.

House Speaker Ryan has long favored the easy migration of foreign workers and an “open door” into U.S. labor markets, such as California. Those policies cut Americans’ wages and shift Wall Street’s job-creating investments away from middle-American population centers towards the coastal cities where immigrant workers arrive and settle. California is a test case of Ryan’s cheap-labor vision which he described in 2013.

But Trump’s effort to limit legal and illegal immigration is driving up wages and salaries for Americans in various locations and careers around the country. The beneficiaries include African-American bakers in Chicago, Latino restaurant workers in Monterey, Calif., disabled people in Missouri, high schoolers,  resort workers in Hilton Head, construction workers, Superbowl workers, the garment industry, and workers at small businesses, and even Warren Buffett’s railroad workers.