What is happening in Greece should come as no surprise to anyone. And it certainly comes as no surprise to me, as I am family to Greece’s last truly conservative, free-market Prime Minister, Constantine Mitsotakis (1990-1993). Other than attending a church service with the Prime Minister and a Greek Independence Day parade on a visit to New York soon after his fall from the Prime Ministership, I have no memory of him at that time period (I was born and raised here in the United States in 1988). But from what I have been told by family and read in newspaper archives, I have been able to partially reconstruct how Greece’s last opportunity to step back from the edge of the abyss was squandered when my uncle’s warnings were ignored and his reforms defeated – both by militant foes and weak-kneed allies alike. 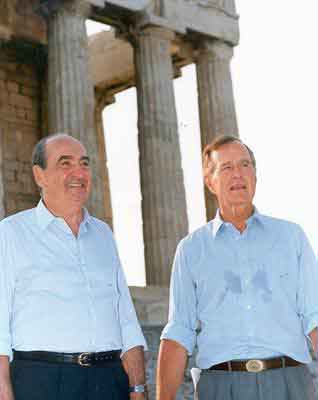 The Prime Minister and his friend: President George H.W. Bush

In 1981, the Socialist government of Andreas Papandreou came to power and took the country in a radical left direction. Under his leadership, the government grew to control a very large portion (two-thirds) of the economy, employ one of every five workers, and quadruple the national debt. Large-scale government monopolies were everywhere, run by massive public-sector unions. And on top of all that, it became law that civil servants, the number of which was skyrocketing thanks to a grand patronage system, could not be dismissed unless they were caught in a criminal offense.

Papandreou was also rabidly anti-American – which gained him the support of the newspaper Ethnos, a favor he repaid by attacking New York Times journalist Paul Anastasiades (aka Paul Anastasi) when he revealed that Ethnos was a KGB operation. In February 1992, National Review reported on a talk given by “a former deputy director of the KGB mission in Athens, Viktor P. Gundarev”:

He told of how the KGB at one point orchestrated a massive peace demonstration near the Acropolis and even had a hand in the repeated “disfigurement” of a larger-than-life size bronze statue of Harry S. Truman located in central Athens. … Among numerous specific actions, Mr. Gundarev listed infiltrating the Greek press … and discrediting various individuals who inconvenienced the Soviets in one way or another.

One of these individuals was the anti-socialist Constantine Mitsotakis [who was then Prime Minister]. The KGB spread disinformation on Mr. Mitsotakis, presenting him as an incapable politician and a “Western lackey.” Contrariwise, Andreas Papandreou was portrayed in a positive light.

Then came 1990. Communism/Socialism was collapsing all around eastern Europe as Greek voters readied themselves to go to the polls. Paul Anastasi describes the scene in the New York Times: “The main election poster of Greece’s conservative party depicts a crumbling Berlin wall, while that of the Socialists and Communists emphasizes modest change instead of the militant leftist measures advocated in the past. When Greece, a member of the North Atlantic Treaty Organization, holds its third elections in 10 months on April 8, the outcome is likely to be influenced largely by events in Eastern Europe. … Mindful of their decline in popularity, Greece’s Communists have allied with the Socialists in single-seat constituencies – an electoral alliance intended to block a conservative majority. … But the conservatives say the Socialist-Communist alliance will backfire as it generates public alarm over a left-wing ‘popular front.'”

This month Mr. Papandreou announced that he would seek to become Prime Minister again, with Communist support.

Mr. Mitsotakis retorted, ”While Communism and socialism collapse throughout the world, Greece would have the only such government in the West, indeed perhaps in the world.” He described the Socialist-Communist electoral agreement as ”shameful.”

In the end, Constantine Mitsotakis became Prime Minister – because the party, New Democracy, was able to win 150 of the 300 parliamentary seats, and with the support of an ND splinter group’s only elected official, obtained 151 seats, the bare minimum needed at that time to form a government. What this meant was that if even one member left the party, the government would collapse.

Thus, with this weak government, Mitsotakis set out to turn Greece in the right direction.

I am not sure about all the events that went down. But this much was clear:

1) Because of weakness of his governing majority, the largely unified Socialist/Commie opposition – combined with the self-proclaimed “moderates” within New Democracy – were a constant roadblock to the many sweeping changes Mitsotakis proposed to implement, such as privatizing the massive government monopolies that stood in the way of business.

2) The massive public sector unions and the mass patronage system that created and protected them throughout the Papandreou regime were threatened by the reforms. The socialist/commie-run unions reacted in typical fashion – with strikes and violence. Take, for example, this story from the Jan 12, 1991 edition of the NYT:

The Greek Government said today that four people had been killed in a fire and more than 100 hurt overnight as high school students and leftists clashed with riot policemen during protests over educational changes.

The riots began during a giant demonstration on Thursday night by high school students and leftists, who were protesting the death of a mathematics teacher a day earlier. He had been killed in clashes between rival student groups over whether the takeover of school premises should continue as a means of forcing through educational reform and the withdrawal of a widely debated Government education bill.

Government and police announcements said the four people killed had been trapped in a department store that was destroyed by fire. The fire resulted from a combination of firebombs tossed by students and tear gas used by the riot police to disperse them, the authorities said.

The disturbances were concentrated around the Athens Polytechnic … As a result of the clashes overnight, tens of shops, banks and cars were destroyed, buses were overturned and the commercial center of the capital came to a standstill. But despite appeals for order, another demonstration took place tonight, this time with the participation of members of Parliament from the Socialist and Communist parties.

The controversy over education reform has been sweeping Greece for the last two months, but the clashes erupted this week only on the start of the new school term. The country’s private and public schools have been closed and are to remain closed next week as a result of a decision by teachers’ unions. The Government has been appealing to students and teachers to return to classes, pending further negotiations.

The student reaction this week forced the resignation of the Minister of Education and the withdrawal of the education bill. The legislation, intended to stem growing disorder and a drop in standards at secondary schools, had provided for more work, less free time and more discipline.

The crisis has developed into one of the most serious challenges to the conservative Government since it came to power nine months ago, ending a decade of Socialist rule and weak coalition governments. Former Prime Minister Andreas Papandreou, the Socialist leader, has demanded the Government’s resignation.

But the Government, in a harshly worded announcement tonight, accused the Socialists and the Communists of using the high school students and of orchestrating the disturbances to try to bring down the administration. It said the opposition was “bringing ruin” to the country at a time of major economic, military and foreign policy problems resulting from the gulf crisis.

The conservative New Democracy Party argues that the demonstrations have been encouraged by the Socialists in reaction to the decision to put Mr. Papandreou on trial in March, on charges of fraud and corruption resulting from a $200 million banking scandal during his administration.

Prime Minister Constantine Mitsotakis said the incidents and the opposition’s attitude were “sordid and abhorrent.”

3) What ultimately did my uncle’s Prime Ministership in – in addition to opposition to his free-market reforms – was his solid Pro-Westernism and his refusal to join with Slobodan Milosevic in his aggression against the so-called Former Yugoslav Republic of Macedonia. As a result, an opportunist trying to present himself as a “nationalist” by the name of Antonis Samaras defected from the ND Party, along with two of his buddy ND members of parliament, causing the collapse of the Mitsotakis government and the return of the Socialists to power – ending all attempts at reform (Samaras is now the leader of New Democracy).

In my opinion, the New Democracy government headed by Constantine Karamalis in the last decade did not implement the free-market conservative policies needed to stabilize the Greek economy by controlling the mounting debt. In fact, more recent personal conversations that I had with Cabinet members of the former Karamalis government indicated that, in their view, if they were to privatize the state-owned monopolies, the political cost would be too high. My response then, as it is today, was, “So let’s lead the country to bankruptcy so that you can govern for a few more years? Is that what you mean?” Obviously I received no credible response.

Recently, when it came time to support the austerity measures proposed by Greece’s European partners, Samaras’s New Democracy failed to live up to the critical seriousness of the situation at hand. To gain political advantage by demagoguing, he voted against what has always been a cornerstone of Greek conservative economic policy – austerity and smaller government. In fact, in addition to the ineptitude of the Socialists, Samaras’ New Democracy – which can no longer be called conservative in many ways and now often finds itself to the left of the Socialists – can be credited with leading Greece to the brink of bankruptcy today. Fortunately, as all opinion polls show, Greeks are waking up to the reality of whom their current political leaders are and whose interests they truly represent.

The lesson is that when a society is pushed too far to the left, it is hard for it to turn itself around.

This warning must not be taken lightly.