In a referendum that was held on Tuesday and Wednesday on whether toapprove a proposed new constitution, a spectacular 98.1% of thosevoting said “yes,” though voter turnout was only 38.6% of registeredvoters. This has given rise to questions of ballot-stuffing, butthere have no reports of this happening.

However, the army-led government left nothing to chance in thereferendum. There were expensive ad campaigns telling people to voteconstitution could be arrested. Thousands of Muslim Brotherhoodmembers have been arrested or killed since the ouster of MohamedMorsi, so the climate of fear was such that any serious opposition tothe referendum was unlikely to surface. The low voter turnout isbeing ascribed to a boycott by Muslim Brotherhood members.

When Muslim Brotherhood leader Mohamed Morsi was elected president inJune 2012, his election was hailed as the first free democraticelection of an Egyptian leader in the millennia of the nation’shistory. However, once in office, Morsi stunned Egypt and the worldby taking a series of steps to make himself the “new Pharaoh” ofEgypt, a virtual dictator. He issued decrees giving himselfdictatorial powers, he fired other government officials and replacedwith the Muslim Brotherhood officials, and having his MuslimBrotherhood supporters unilaterally rewrite the constitution accordingto the Brotherhood’s strict version of Shariah law.

A referendum on Morsi’s new constitution was conducted in December,2012. It received an overwhelming 64% “YES” vote, but only 33% ofregistered voters actually voted. So an army coup ousted Morsi onJuly 3 of last year, and now a new referendum has been held on a newconstitution. The “yes” vote was 98.1%, and the turnout was 38.6%.Officials in the army-led government are pointing to the slightlyhigher turnout figure as an indication of the huge victory in thereferendum.

Now that the referendum is over, elections must be held within sixmonths. All eyes are on army chief Abdel al-Fattah al-Sisi, who isconsidered to be a hero by many for freeing Egypt of Morsi’sdictatorship, while Morsi supporters consider him guilty of crimesagainst humanity. Al-Sisi is a very charming 59 year old man, andextremely popular with women, despite having a wife and four children.It’s believed that al-Sisi is considering becoming a civilian andrunning for president. Al-Ahram and McClatchy and AFP 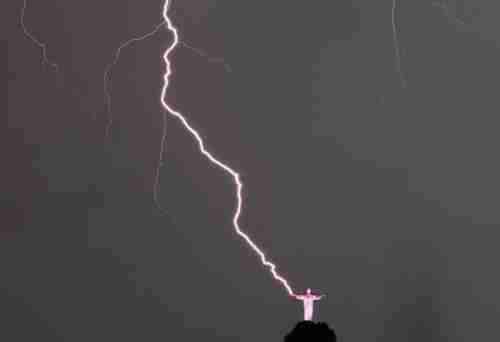 Spectacular pictures were produced when the Christ 130 foot tallChrist the Redeemer (Cristo Redentor) statue in Rio de Janeiro,Brazil, was struck by lightning on Thursday. The statue wasoriginally built in 1931, and underwent a $3 million renovation in2010. Thursday’s lightning strike damaged the right thumb of thestatue, and the local archdiocese said that the thumb would berepaired. Metro (London)

Beijing’s smog level reached highly dangerous levels on Thursdayafternoon, forcing almost everyone to remain indoors. The air had anacrid odor, and anyone venturing out wore an industrial strength facemasks. In some places, you couldn’t see the buildings across thestreet. Some Chinese newscaster must have had a sense of humor,because they started televising the sunrise in real time, anddisplaying them on the giant outdoor electronic screens that normallyprovide advertisements. The pollution level reached as high as 671micrograms on Thursday at 4 am, 26 times as high as considered safe bythe World Health Organization.