Sunni Jihadists friendly to the Islamic State of Iraq and al-Sham (ISIS) attacked a Shiite shrine in Samarra, Iraq, late Monday, killing six people, according to a television report from an Iraqi news channel. 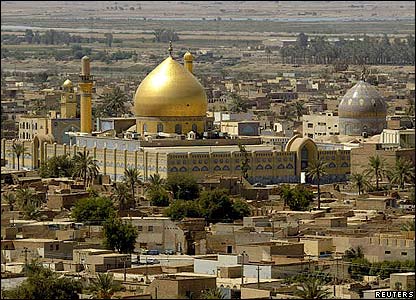 The report said that four mortars were shot into the mosque known as the Askariya Shrine, which was built in the year 944 and is considered one of the most important holy shrines to the Shiite community. An Iraqi security source told the New York Times that two of the four mortar shells made contact with the mosque’s golden dome, which resulted in minimal damage to the facility. The other two shells hit a group of Shiite Muslims who were gathered to celebrate the first day of the Muslim holiday, Ramadan.

The Askariya Shrine sustained heavy damage in 2006 after it was attacked by Al Qaeda groups. The jihadis went into the shrine and set off explosives in the holy site. The attack resulted in a wave of clashes between Sunni and Shia Muslims throughout Iraq. The sectarian violence stemming from that incident lasted several years. 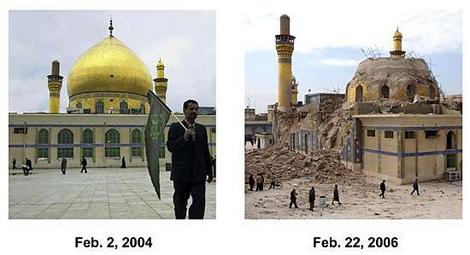 Meanwhile, the United States is sending 300 more military personnel to enhance security at the US Embassy in Baghdad. Officials said the 300 soldiers will be tasked with protecting US citizens and US property in the Baghdad area. The White House said that the President directed 200 soldiers to beef up security at the Embassy and help support facilities at the Baghdad International Airport. The other 100 will be tasked with providing security and logistics support in the Baghdad area.

The additional troop presence raises the US total in Iraq to approximately 750, according to the Pentagon.

“The presence of these additional forces will help enable the embassy to continue its critical diplomatic mission and work with Iraq on challenges they are facing as they confront Islamic State in Iraq and the Levant,” said the Pentagon’s Press Secretary.

The State Department announced that the US will move a “small number” of Embassy staff from Baghdad to consulates in the northern city of Irbil and the southern Iraqi city of Basra.

While the United States has been hesitant toward the idea of carrying out airstrikes, an Iraqi parliament member has insisted upon the measure and even warned of the results from not doing so: Iraq would turn to Iran if need be. “We will take any assistance, even from Iran,” said the spokesman for Prime Minister Maliki’s Dawah Party. He continued, “We are waiting for the Americans to give us support. If US air strikes [happen], we don’t need Iranian air strikes. If they don’t, then we may need Iranian strikes.”