The UN Palestinian refugee body (UNRWA) is under the complete control of Gaza-based terror groups Hamas and Islamic Jihad, a Center For Near East Policy Research report concluded.

Over the years, UNRWA has become a convenient surrogate for terrorist organizations, led by Hamas, which unrestrictedly dominates the UNRWA workers union, and its men — along with educators from the Islamic Jihad and other groups — are the ones who educate generations of descendants of Palestinian refugees about the values of jihad against Israel and all infidels…

The Center For Near East Policy Research documented how the controlling union of UNRWA is led by Hamas jihadi Suheil Al Hindi. It also noted that eleven of fourteen positions in the UNRWA teachers’ union have been filled by Hamas members.

The report said of the UNRWA union leader, “Al Hindi, who in the past also headed the teachers’ sector at UNRWA, does not hide his affinity for the Hamas organization and takes part in overt political activities as its representative. In his capacity and as a supervisor of student summer camps, Al Hindi has a tremendous impact on the UNRWA education system and the contents taught in it. UNRWA’s management is well aware, at least since 2004, of the fact that Suheil Al Hindi, who headed the UNRWA teachers sector, is a senior Hamas activist who supports jihad against Israel and suicide bombings…”

“Hamas’ takeover of the UNRWA institutions and UNRWA staff should set off alarms regarding the possibility of funding given by donor countries – primarily the United States – finding its way to financing the salaries of Hamas and Islamic Jihad activists,” the report concluded.

During Israel’s recent war against Hamas, known as Operation Protective Edge, on three separate occasions rocket arsenals were found at UNRWA schools in Gaza. On another occasion, three Israeli soldiers lost their lives after a booby-trapped UNRWA building detonated while they were inside of the structure.

UNRWA has in the past been accused of hiring terrorists as employees and using its ambulances as cover to aid Hamas’s terror operations.

Videos such as Camp Jihad have exposed the radicalism in standard UNRWA schools – which preach salafi jihadist ideologies along with plenty of anti-semitic sentiments – to unassuming grade-school aged children. 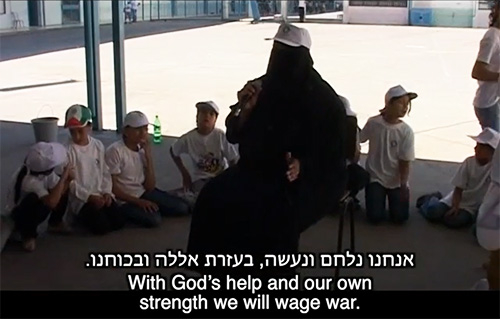 Following Israel’s 1948 war of independence against Arab aggression, UNRWA was formed to provide relief and public works programs for displaced Arabs who lived in the former British mandate of Palestine.