At first, the Islamic Society of Greater Oklahoma City (ISGOC) had denied knowing or being familiar with alleged beheader Jah’Keem Yisrael, nee Alton Nolen. When pictures emerged of Jah’Keem praying at the mosque on his Facebook page, the mosque’s story radically changed.

The media seamlessly reported the morphing narrative without question. Then the Islamic Society of Greater Oklahoma City went into full damage-control and victimhood mode. Their response? Leaders of the ISOGC wanted security protection from the phantom “Islamophobia” and the “backlash” that never happens.

The Wall Street Journal reports that Nolen was a regular at Friday prayers at Masjid An-Nasr, a mosque in Oklahoma City that is part of the Islamic Society of Greater Oklahoma City. Saad Mohammed, director of Islamic information ISGOC, said: “There was nothing about him that alarmed us at all.”

Like so many jihadists, Jah’keem Yisrael converted to Islam in jail. Prisons have long been recruiting centers for jihadists. According to one attendee, the Islamic Society of Greater Oklahoma’s mosque reinforced the hate and violence in the Islamic texts and teachings extolled by prison jihad recruiters.

It has also come to light that the Nolen’s mosque has close ties to Hamas and al Qaeda.

Mufid Abdel Qader, the younger half-brother of Hamas’ supreme political leader and world’s leading terrorist, Khaled Mashal, was the founder and incorporator of the Islamic Society of Greater Oklahoma City. 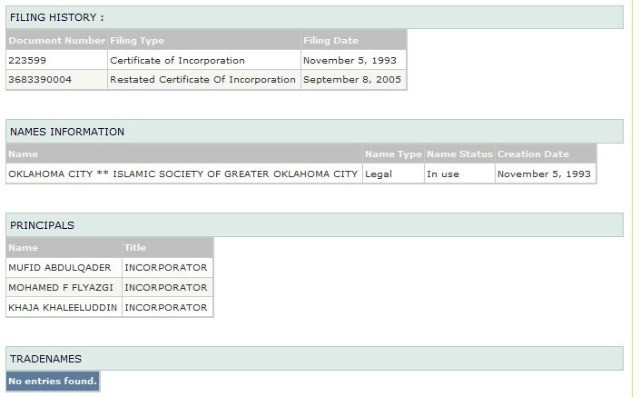 Abdulqader, one of the Holy Land Five jihadists, was convicted of providing material support to terrorists in the largest Islamic terrorism funding trial in our nation’s history.

Abdulqader worked in concert with many American Muslim leaders, including the Hamas-tied Council on American-Islamic Relations (CAIR) and its founder Nihad Awad, to fund terrorism. CAIR was named as an un-indicted co-conspirator in the Holy Land Terror funding trial as well.

Discover the Networks reports that “in addition to his work as a civil servant, for a number of years Abdulqader also performed as a singer in a band named Al Sakhra (‘The Rock’), which toured the United States from coast to coast for appearances at Hamas fundraisers. Al Sakhra‘s songs were replete with lyrics urging hatred toward Jews, encouraging violent holy war, and glorifying the martyrdom of suicide bombers.”

Discover the Networks adds that Abdulqader and Mashal traveled together to Oklahoma City for Hamas:

A 1992 video places Abdulqader and Mashal together at a major Hamas fundraising conference in Oklahoma City, where Abdulqader and his fellow Al Sakhra members, all wearing traditional kaffiyeh headscarves and desert robes, sang: “I have nerves of steel, and no threats scare me. Only the one who is proud of carrying the rifle will succeed. No to the peace conference! Yes to jihad!”

“Our people in Al Aqsa are out to revenge, to destroy the enemy,” Abdulqader sang in another Al Sakhra production. “Our revolution is spread throughout the land! With Koran and Jihad, we will gain our homes back … My precious eyes are for Palestine, the agony of death is precious, killing Jews … Death to Jews, is precious. Jews will not fear threats, only action. So Hamas, hit them with the shoe bottoms of Islam and Hamas!”

Even worse, a former imam of the ISGOC is Suhaib Webb, a former gangster and now imam for the Boston bombers’ mosque. Charles Jacobs, head of Americans for Peace and Tolerance, described Imam Webb this way: “[He] teaches vicious hatred and calls for young Muslims to engage in Jihad against non-Muslims in order to establish a global Islamic state.”

FBI surveillance documents found that Imam Webb was a close associate of American-born Al Qaeda terrorist leader and jihad recruiter Anwar al-Awlaki. Awlaki was the imam to many of the 9/11 Muslim terrorists.

Terrorism expert Mitchell Gray reported in 2005 that Imam Webb has mentioned several men as having great influence on his Islamic path. Most especially Hassan Al-Banna, who founded the terrorist organization the Muslim Brotherhood in Egypt in 1928. The Brotherhood is the father of all modern jihad terror groups. A famous associate of Al-Banna was Brotherhood theorist Sayyid Qutb, who called for the extinction of America.

Meanwhile, Robert Spencer reports this, allegedly from a former member of the Islamic Society of Greater Oklahoma City:

I went to the same mosque the Oklahoma Muslim who beheaded his co-worker today. I live ten minutes away!

The Imam was Imad Enchassi the last I heard. He was a friend of mine. He is a Lebanese-born Sunni who hates Israel. He once gave a sermon that the Israelis were trying to collapse al-Aqsa mosque by digging tunnels underneath it. They have no issue with Palestinian suicide bombings because, as it was explained to me, that is the only weapon the Palestinians have.

They sold Milestones in the book shop while I was there, which as you know calls for replacing all non-Islamic governments with Islamic ones. I remember listening to a tape a friend of mine, Yahya Graff, another white convert to Islam, had that prayed for the destruction of Israel and America.

The imam when I first converted, Suhaib Webb, is hailed as a moderate by liberals in the United States but he was the one that explicitly told me that according to Islam, three choices are to be given to non-Muslims: convert, pay the jizyah tax and live under Islamic rule, or jihad. They try very hard to whitewash Islam when the media is around, but they believe in their religion and the ultimate goal of an Islamic caliphate.

In the wake of the Oklahoma jihad beheading, the leader of the Islamic Society of Greater Oklahoma wants security protection from the mythical “Islamophobia.” The talk is all about an imaginary backlash that never happens. This nonsense is a stealth jihad — a device to silence any criticism of jihad. Real moderates would have long ago adopted programs in the mosques to teach against and expunge the hate and calls for annihilation in the Qur’an. And while Muslims in the U.S. condemn the Islamic State, where are they teaching against the ideology that gave rise to it? Right now, nothing is being done to stop jihad recruiting in U.S. mosques, even as several hundred young Muslims from the U.S. have gone to wage jihad for the Islamic State.

This mosque is not unique. According to one recent survey, over 80% of the mosques in the U.S. teach, promote, and advance sharia law. My organization, the American Freedom Defense Initiative (AFDI), has an 18-point platform that includes these points:

I believe these mosques are bases of hate and treason and must be monitored and shuttered if jihad-related activity or preaching is found to be taking place in them.