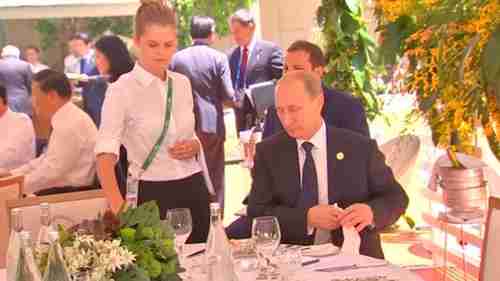 Nobody wanted to eat lunch with Russia’s president Vladimir Putin onSaturday at the G20 Leaders’ Summit being held in Brisbane, Australia.It was supposed to be an economic summit, but most other leaders usedthe opportunity to blast Putin for Russia’s repeated militaryintervention in Ukraine, for annexing Crimea, and for supplying theweapons and training to the Russians who shot down the MH17 airlinerover Ukraine, killing hundreds of innocent passengers. Severalleaders told Putin bluntly to “get out of Ukraine.”

By lunch time, Putin was so isolated that no one wanted to be seenhaving lunch with him, so he sat at a lunch table alone. Later, hisdelegation announced that he would be leaving the G20 meeting early,calling the meeting “nonsense.” Australian Broadcasting

Jonathan Gruber on Obamacare and the stupidity of the American voter

Obamacare supporters have been fleeing in droves from MIT professorJonathan Gruber, who was the principal architect of Obamacare. Butthere’s no getting away from him. A glowing article in the NY Timeson March 28, 2012, made it clear that Gruber was the number one healthcare expert in the country, not only because he had been developingmodels for decades, but also because he was a prime architect forRomneycare in Massachusetts, on which Obamacare was based.

Gruber’s lectures at MIT are available on videotape, and they’verevealed everything from the contemptuous attitude of Obamacareofficials, and also deception and fraud in the selling of Obamacare.

This bill was written in a tortured way to make sureCBO did not score the mandate as taxes. If CBO scored the mandateas taxes, the bill dies. Okay, so it’s written to do that. Interms of risk rated subsidies, if you had a law which said thathealthy people are going to pay in – you made explicit healthypeople pay in and sick people get money, it would not havepassed…. Lack of transparency is a huge political advantage. Andbasically, call it the stupidity of the American voter orwhatever, but basically that was really really critical for thething to pass… Look, I wish Mark was right that we could make itall transparent, but I’d rather have this law thannot.

I’d like to point out that it’s not people like me that Gruber iscalling “stupid.” The stupid people, in Gruber’s view, are thesupporters of Obamacare, who are presumably too stupid to see throughthe deception and fraud of Obamacare, as I was and many others wereable to do. Gruber’s remarks are an indictment of the Obamacaresupporters, mostly Democrats who, in Gruber’s view, were too stupid tosee what was going on.

When I first wrote about the “Obama’s health plan, a proposal of economic insanity”in 2009, I said that this plan would never be implemented because itwould destroy markets and be economically disastrous. I compared itto President Richard Nixon’s wage-price controls which were not asdisastrous for the markets as Obama’s health plan, but still wreckedthe economy for close to a decade. I’ve repeated that many timessince, and I’ll discuss if further below.

However, let’s turn to another Gruber quote, this one revealingfinancial fraud on the part of the Obamacare officials.

Obamacare advocates have repeatedly made statements to theeffect, “Romneycare worked in Massachusetts, which proves thatObamacare can work across the country.” However, anotherGruber videotape says that’s not true, because Romneycare wasessentially bailed out by the federal government:

We had a pretty powerful senator you may have heardof named Ted Kennedy. Ted Kennedy had managed to figure out a wayto rip off the federal Medicaid program to the tune of about $500million a year through a series of strange manipulations.

Here was Mitt Romney’s dirty little secret that we don’t like totalk about in Massachusetts, which is the way we passed our law isthe federal government paid for it.

George Bush said why am I sending this Democrat $500 million ayear, I’m taking it back. Mitt Romney to his credit went toGeorge Bush and said, look, can we keep the money if we use it foruniversal coverage. And Bush to his credit said yes.

We realized that we can’t do this at the state level anymore. Thefeds are going to have to get involved. […]

[Kennedy was] delivering about $400 million a year in slush fundsto our SafeNet hospitals, basically ripping off the federalMedicaid program.

So Romneycare was never self-sustaining, as Obamacare supporters havesaid, but was actually “ripping off the federal Medicaid program” tosurvive, according to Gruber. We now know that Obamacare wasbased on deception and fraud on many levels:

It’s almost impossible to even imagine the astronomical sums that havebeen spent on the greatest IT disaster in world history, theHealthCare.gov web sites. As I wrote a year ago, this would have beena $10 million project if implemented in the private sector. (See “1-Dec-13 World View — Obamacare: 500M lines of code, $500M, only 60% completed” fromlast year.)

But let’s say that it should have cost $20 million. Then triple thatamount because everything the government does is inefficient, andwastes enormous amounts of money, due to corruption, public sectorlabor unions, and cronyism. So that would be $60 million paid tothe government for something that the private sector could dofor $10 million.

According to some estimates, Healthcare.gov implementation costs arenow in the billions of dollars.

On Saturday, open enrollment began, and the Massachusetts Obamacareweb site, known as the Health Connector, came up. The cost forthis one state web site? $254 million. And that was $80 millionover budget.

This is almost unbelievable. Where is all this money going? There’sno way that this is simply IT development expenses. There must behundreds of millions of dollars being skimmed off by the contractorsimplementing Obamacare, and those contractors are going to be bigObama supporters and Democratic party contributors. My guess is thatObamacare contractors are skimming off hundreds of millions of dollars andkicking it back to Obama administration cronies, to pay for the 2016elections. That’s the most credible explanation, until someone tellsme where billions of development costs have been going.

The implementation of Obamacare

As soon as Obamacare was proposed, I called it a “proposal of economicinsanity,” and compared it to Nixon’s wage-price controls, which isthe same kind of proposal as Obamacare, at its core. I said thatObamacare would never be implemented, and I’ve repeated that manytimes.

Has Obamacare been implemented? It was supposed to be universalhealth coverage, and it certainly is not.

Nixon’s wage-price controls were popular because they promisedsomething for nothing. They promised price controls that would keepprices of everything low. But then the shortages started occurring –gasoline, heating oil, red meat, soybeans, and numerous otherproducts. Nixon did everything he could to save the controls,granting special exemptions and perks to favored people, announcingfrequent rule changes to resolve each new problem as it arose, and soforth.

Obamacare has followed the same path. People loved the promise oflow-cost health care. But then shortages started showing up in theform of restricted networks. Skyrocketing insurance premiums arebeing ameliorated by federal subsidies that are a clearly in violationof the Obamacare law, and are being reviewed by Supreme Court, with adecision to be announced in June. (At least Nixon didn’t try toreduce high prices with federal subsidies. That’s an Obamainvention.) And Obama has issued a wealth of rule changes andmodifications to Obamacare to keep it from collapsing.

Obamacare supporters like to brag that there are 8 million moreinsured people now. That’s a distortion of the situation. There aremillions of “insured” people with deductibles of $5,000-$15,000.These millions of people are effectively uninsured, because they haveto pay all of their medical expenses, in addition to the Obamacareinsurance premiums.

The heart of Nixon’s wage-price controls were the mandates — it wasillegal to increase prices or wages by more than a certain amount.

Both of these have been eviscerated, for the time being. Because theywere so unpopular, Obama was forced to effectively postpone them until2015, under the assumption that Obamacare would be so wildly popularby 2015 that the mandates could be implemented then. Even so,millions of people with full-time 40 hour/week jobs have been forcedinto part-time 29.5 hour/week jobs by employers who can’t afford topay for health insurance for their employees. These mandates are atthe core of Obamacare, just as wage/price mandates were at the heartof Nixon’s controls, and without the mandates, both Nixon’s controlsand Obamacare become meaningless.

Nixon desperately did everything he could to save his wage-pricecontrols, but in the end they were so unpopular and so disastrous thatCongress forced them to be ended. They did enormous damage to theeconomy and accomplished nothing.

Similarly, Republicans are going to control both houses of Congressnext year. My expectation is that some “compromise” will be found toweaken the mandates so much as to make them meaningless. In thatcase, both Obama and Republicans will be able to declare victory, andthe only casualty will be the health care system which has beenenormously damaged by Obama’s “Obamacare” ego trip. But no matter.Obama will have his meaningless Obamacare legacy, and his cronies willhave their hundreds of millions of dollars.