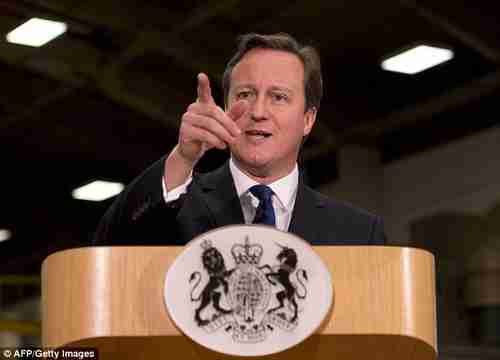 Britain’s prime minister David Cameron offered a set of proposals onFriday to discourage migrants from “benefit shopping” — coming to theUK just to take advantage of the generous welfare benefits. Hisproposals are not targeted at Muslim migrants coming from Syria ornorthern Africa, entering the EU illegally. They’re targeted atmostly Christian EU citizens in eastern Europe, for example inBulgaria, where wages are typically 20% of those in the UK, or inPoland, with wages that are 40% of those in the UK.

Cameron is under tremendous political pressure to find a way to limiteast European migrants from coming to the UK. The UK Independence Party(UKIP), which favors Britain leaving the EU entirely, is gainingstrength because of the immigration issue, and the fact that EUimmigration is reaching record levels.

Previous proposals to simply put an annual cap or limit on the numberof migrants have met with almost universal hostility from leadersacross the EU, because they violate “guaranteed freedom of movement,”which is one of the founding principles of the 1957 Treaty of Rome onwhich the EU is based.

The major elements of Cameron’s proposal are:

In his speech, Cameron warned against the UKIP — “betraying you” with

Because those who promise you simple solutions are betraying you.

Those who say we would certainly be better off outside the EU onlyever tell you part of the story. Of course we would survive,there is no doubt about that.

But we would need to weigh in the balance the loss of our instantaccess to the single market, and our right to take the decisionsthat regulate it. And we would of course lose the automatic rightfor the 1.3 million British citizens who today are living andworking elsewhere in Europe to do so. That is something we wouldwant to think carefully about giving up.

For me, I have one test, and one test only: what is in the best,long term interests of Britain? …

If I succeed, I will, as I have said, campaign to keep thiscountry in a reformed EU. If our concerns fall on deaf ears andwe cannot put our relationship with the EU on a better footing,then of course I rule nothing out.

European leaders have accused Cameron of blackmail in the past, forthreatening to put to a vote a referendum on whether Britain shouldleave the European Union. Those accusations were renewed on Fridayover his threat to veto new members from joining the EU unless hisdemands are met. Albania is likely to be the next EU member -population nearly 3 million – but there are several others in thewings, including Bosnia (3.8 million) and Montenegro (650,000)

Friday’s speech is a change in tactics for Cameron. He’s given up theidea of putting any sort of cap on the number of immigrants toBritain, since that proposal has received almost unanimous hostilityfrom other EU nations. Instead, he’s proposing to make Britain lessdesirable for migrants by limiting benefits. He’s hoping that thoseproposals will be more acceptable to other European leaders, and thatthey will be enough to satisfy British citizens who are increasingturning towards UKIP. BBC and Daily Mail (London)