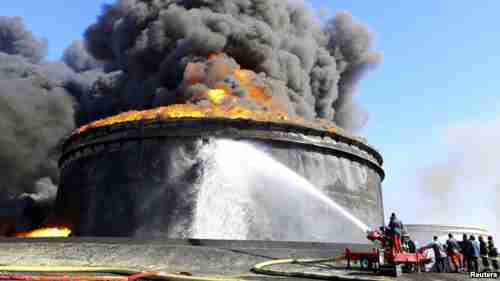 Militants linked to the Islamic State of Iraq and Syria (IS or ISIS or ISIL) took credit for an attack on the the Corinthia Hotel, Libya’s most elegant hotel, in the capital city Libya. The attack combined gunfire and a grenade. Of the nine people killed, five were foreigners, including one American, one Frenchman, and the rest from unspecified Asian countries.

In the 2011 civil war that ousted Muammar Gaddafi, the United States “led from behind” in a Nato operation that aided anti-Gaddafi tribes. Many of these tribes were united in overthrowing Gaddafi, but afterwards splintered into two loose confederations. The government in the west is Libya Dawn, with Islamists and militia from the Misrata region, in control of Tripoli. The second government is the internationally recognized government, headquartered in Tobruk in the east. In addition, an al-Qaeda linked terrorist group, Ansar al-Sharia, is operating in Libya with headquarters in Benghazi, where it was responsible for the attack that killed American ambassador J. Christopher Stevens in 2012. In recent months, a number of individuals in Libya have pledged themselves to ISIS, and have traveled to Syria for terrorist training. Some may already have returned.

The 2011 Nato operation did not pacify Libya, and so Gaddafi would have to be acknowledged as correct when he warned that Libya would descend into chaos if he were ousted. Even worse, there was no follow-on from Nato, and huge storehouses of Gaddafi’s weapons were left unprotected, and those weapons have spread throughout Northern Africa and beyond, via al-Qaeda in the Islamic Maghreb (AQIM).

However, it must be noted that Libya is in a generational Crisis era, and that conflicts between militias began well before the ouster of Gaddafi. Indeed, it was one of those conflicts that led to the civil war in which Nato intervened. We can never know what would have happened in Libya if Nato had not intervened, but in view of Libya’s generational timeline, it is quite likely that Libya would have sunk as deeply into chaos as it did with the Nato intervention.

The war in Libya is becoming more violent every day. As I have been reporting for several weeks, there is a large and growing Muslim versus Muslim war already in progress, not just in Libya, but across North Africa, the Mideast and South Asia. This war is of historic proportions, and will affect all of us. Reuters and CNN

Just as there are now two competing governments in Libya, there are also two competing national oil corporations, with oil tankers and pipelines becoming war targets. Libya holds the largest oil reserves in Africa, and in good times has produced up to 1.6 million barrels of oil per day. Since its militia wars began, however, daily production has dropped as low as 200,000 barrels. However, the oil production began to fall long before the civil war that ousted Gaddafi, thanks to conflicts between militias during Muammar Gaddafi’s reign. VOA and Reuters

Russia’s financial crisis deepened on Monday, as ratings agency Standard & Poors cut Russia’s rating to BB+, which is junk status. The move had been widely anticipated, but the value of the ruble fell 6% against the dollar. Russia is still at investment grade with the two other major ratings agency, Moody’s and Fitch, although many analysts expect them also to lower Russia’s rating to junk status in the near future.

Russia’s financial troubles stem from years of generous spending programs based on an oil price of $100-120 per barrel, as oil production is Russia’s biggest industry. But facing oil prices now below $50 per barrel, and with no spare industrial capacity because of lack of industrial investment in the last two decades, Russia has no way to generate foreign reserves. Add to that, the Ukrainian invasion has turned out to be very expensive, and the Western sanctions have made it almost impossible for Russian entities to borrow money. The result is that Russians are moving their dollar-denominated accounts and assets to other countries, fearing that their bank accounts might be frozen. The result is that Russia’s economy is in a downward spiral, with no visible way of recovering. Moscow Times and Forbes