Londoner takes amazing picture of weasel on flying woodpecker’s back 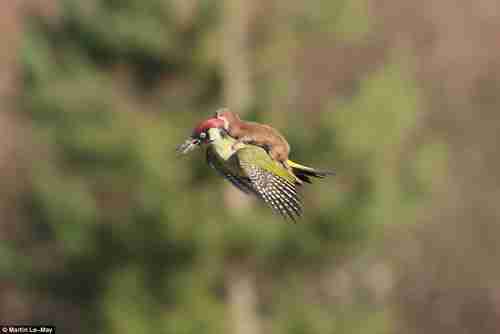 An amateur photographer, Martin Le-May, out for a stroll with his wife on Sunday had an amazing stroke of luck when he photographed a tiny brown weasel on the back of a flying green woodpecker. Apparently, the weasel had pounced on the woodpecker hoping for a meal, but the woodpecker took flight.

Unlike many stories that I tell, this one had a happy ending. The bird landed 20 meters in front of the photographer, and after a tumble in the grass, the weasel ran off. Daily Mail (London)

Europeans are aware, though Americans are not, that when Austria’s Credit-Anstalt bank of Austria collapsed on May 11, 1931, the collapse triggered mass panic and bank failures throughout central Europe, and a worldwide banking crisis.

This is not nearly as bad as the 1931 incident, but it is raising a lot of concerns. The government of Austria announced over the weekend that it was shutting down the Hypo Alpe-Adria-Bank, rather than spending an additional 7.6 billion euros of taxpayer money to bail it out. 5.5 billion euros of taxpayer money has already been paid to the bank up to this point, and a decision was made to stop the bleeding.

Hypo is not an ordinary bank. It is a so-called “bad bank” that was set up to unwind bad debts that came out of the financial crisis in 2008. It has no depositors, so depositors will not lose any money. However, many bondholders will lose a great deal, possibly leading to a chain reaction of further bankruptcies.

The phrase that’s being used is “bail-in.” That is, the Austrian government will no longer bail out the bank, and so all the investors will be “bailed in” to cover the losses. Most of the losses will be in funds managed by Pacific Investment Management Co., Deutsche Bank AG and UBS AG. It is not known who the end investors are, but it’s thought that there will be repercussions, and possible further bankruptcies.

Depositors were not “bailed in” by this event, because the bank has no depositors. However, the action that the Austrian government took was under a regulation called the Bank Recovery and Resolution Directive (BRRD), which allows a government to force both investors AND depositors to lose their money.

Readers may recall that in March 2013, Cyprus was saved from bankruptcy by an EU bailout, on condition that 60% of the savings accounts of large depositors (mostly Russian oligarchs) be confiscated. One of the outcomes of the Cyprus crisis was implementation of the BRRD directive, which could permit ANY depositor’s money to be confiscated, under the right circumstances.

I have repeatedly said that there is no solution to Greece’s financial crisis — not that no solution has been found, but that no solution even exists. No solution existed for Austria’s financial crisis either, and so investors are going to lose billions of euros of their money, risking chain reaction bankruptcies. Sooner or later, something like that will have to happen with Greece as well, and it’s good to remember that the current “compromise agreement” between Europe and Greece expires in July, with no hope of a suitable resolution at that time. Telegraph (London) and Forbes and Bloomberg

Ghasem Soleimani, a top general in Iran’s Islamic Revolution Guards Corps (IRGC), along with dozens of Iranian military advisers, is overseeing the Iraqi army’s attack on Tikrit, with the goal of recapturing it from the Islamic State (IS or ISIS or ISIL or Daesh).

The situation is potentially explosive, because you have Shia militias fighting with Sunni tribes and militias over Tikrit, which was the hometown of Sunni leader Saddam Hussein.

Glaringly absent from the operation is participation by US forces, particularly US war planes, which have been striking ISIS targets since last summer. According to the Pentagon, the Iraqis never made any request for US air support.

News reports indicate that Iraqi forces are bogged down on the outskirts of Tikrit, unable to make much headway. ISIS is striking back with sniper gunfire and suicide bombings on Iraqi checkpoints to slow down any advance on the city. If the Iraq army does enter the city, then it will be street by street fighting by the Iranian-led Shia militias against the Sunni tribes and militias. Indeed, many Sunni citizens of Iraq have welcomed the invading ISIS militias as a better alternative to the Shia-led government in Baghdad. AP and Reuters