A young girl who survived a migrant boat disaster that killed all her friends and family amongst hundreds of others has written an open letter to people in Gambia, her home country, telling them to stay at home.

The letter has been released by the Christian charity giving her care in Italy. In it the 12-year-old said: “I come from Gambia. I cross the sea to come to Italy. Many people have died, my best friends and my sisters and my brothers have died in the wave to come to Italy. 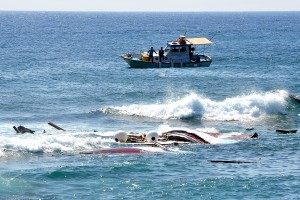 “What I can say is only to tell you people who want to come don’t come please, my brothers and sisters, because [it] is hard to say goodbye”.

When the unnamed girl boarded the smuggler ship that was to carry her family to Italy, her parents paid extra for their daughters to travel on the deck. Her parents took the cheaper option and were locked in the hold along with 400 other people. They all died when the ship sank. The Daily Telegraph reports the girl’s elder sister sacrificed herself to allow her sister to live.

Not having found Europe worth the deadly voyage her family made, the girl continued in her letter: “To cross the sea is very, very dangerous. Please, my brothers and sisters, stop coming in this bad way, please, please and please. Because of saying this word I know what I saw and I say many things that I can not say. Goodbye, and thank you for reading this letter”.

Drowning is not the only peril faced by those placing their lives in the hands of illegal smugglers. In return for the smuggling fee, which can be as high as $2,000, the ‘customers’ are routinely beaten and starved, with many murdered for disobeying orders.

As Breitbart London reported, an Italian court heard in Feburary how one smuggler, who killed most of his wards as his boat foundered in the Mediterranean, had repeatedly raped a number of young girls on their journey from Somalia to Italy.