Tech-savvy Greeks are buying expensive items like Macbook laptops and Playstation games consoles in preparation for a potential barter economy, as it is perceived the gadgets will retain their value, irrespective of economic collapse or currency change.

Bloomberg reports Greeks are rushing to use credit and debit cards to make large purchases that could potentially be sold on for hard cash later on, as currency controls have meant the supply of Euros is limited, and they fear the government will soon suspend card transactions as well. One shop assistant who asked not to be named told Bloomberg: “People are spending the money they have in the bank because otherwise they’re afraid they won’t get it out. A Mac is something that keeps its value”. 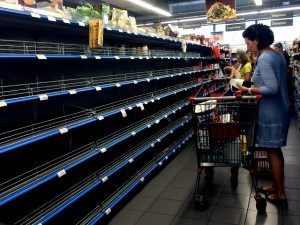 With the daily withdrawal limit for Greek bank customers now set at €60 buying the machines in cash is all but impossible, but regardless the weekend’s national referendum triggered a run on stores as people feared shortages and massive price increases for imported goods should Greece crash out of the Euro.

Petrol stations and grocers are also struggling to meet demand, with the manager of one Greek petrol station chain telling journalists that half of his stations are now completely dry. Rationing of petrol has been reported in the country as some bring jerry-cans to create private stockpiles.

Supermarket shelves in Greece have reportedly been cleared, with shoppers going for staples such as rice, beans, and flour, and some have warned medicines are now in short supply.