An Islamist plot to kidnap and behead a senior military officer has been foiled by French terror police, as the country weathers its most violent Bastille Day in decades. 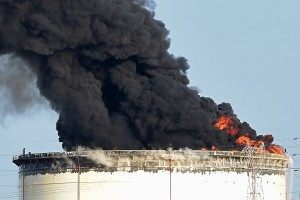 A gang of four “radicalised Muslims” were arrested on Monday by French specialist counter-terror police after a wiretap on one suspect handed officers intelligence on their general beheading plot. The plan was to make a symbolic attack on the military base that French special forces use to stage expeditionary troops for interventions in theatres like Mali and the Central African Republic. The gang aimed to kill on the 7th of January 2016, the first anniversary of the Charlie Hebdo killings in Paris, reports TheLocal.fr.

The gang, whose members were 16, 17, 19, and 23-years-old planned to film the killing on a high-definition ‘GoPro’ camera and upload the footage to the internet. The eldest member, called the ‘ringleader’ by police, was a former marine in the French navy discharged last year for ‘bad behaviour’. Calling himself ‘the Emir’, the radicalised Muslim apparently wanted revenge on his former bosses – and his military training may very well have left him a capable killer.

The plot was unveiled after the 17 year old member was placed under police surveillance because of his extremist activity on social media. Making contact with other ‘French’ Jihadists, some of whom are now in jail, the young would-be killer expressed a desire to go abroad to fight leading the police to wiretap his phone. Learning details of the plot to behead a senior soldier, they took the gang into custody on Monday. 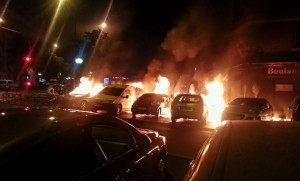 For most native French, the national Bastille Day, celebrating the French revolution of 1789 on the 14th of July each year is cause for merriment – but for some it is a day of wanton destruction and terror. Breitbart London has already reported on the three-bomb blast at one of France’s largest refineries that took place as the nation was waking up. The explosions caused fires in oil tanks that took 50 fire appliances all day to extinguish, and were quite possibly perpetrated with plastic explosives stolen last week from an unguarded army munitions depot.

In a move that will surprise absolutely no-one, French police sources have suggested to local media that the sophisticated attack on a protected, sensitive site of critical national infrastructure was more likely perpetrated by “a neighbour tired of the smell and pollution of the site” than Jihadists.

Elsewhere, the inhabitants of France’s ‘ZSUs’ – zones of sensitive urban populations, i.e. poor migrants in inner city slums commonly known as ‘no go zones’– ‘celebrated’ Bastille Day by torching hundreds of cars. These vandals had such a good time, in fact, that they burnt a record number of cars. French media got excited at initial reports that 130 vehicles had been torched nationwide, a high number but not significant compared to the fact that on average a remarkable 80 are burnt on any normal day, reports Le Figaro.

The real shock came at an Interior Ministry press conference today when revised figures were released, announcing 721 cars in total had been burned, and 603 people were in custody over Bastille day rioting – a 68 per-cent increase on Bastile day last year, reports Valeurs Actuelles. 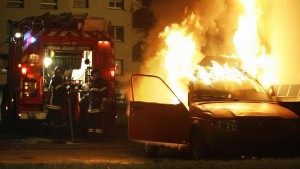 The violence isn’t limited to mindless vandalism of cars. Police officers were fired upon with mortar bomb fireworks, the kind of which are illegal in the United Kingdom. Police were also set upon by angry gangs with a number injured during clashes with youths reported in the fifth, fifteenth, eighteenth and nineteenth arrondissements of Paris. One northern Paris suburb saw a library, school and a supermarket burnt down. In Lyon bus shelters were destroyed, bush fires were deliberately started and another supermarket was burnt. Police were lured away from safety and ambushed, according to reports.

It is little wonder such violence towards the authority and disregard for private property is so widepsread – the French state is completely unwilling to punish those responsible, despite the arrests. The general secretary of the French Union of Police Alliance lamented this week after the violence:

“There is a sense of impunity as the criminal justice is almost non-existent. These individuals will spend a night in a police cell, or at best receive a judicial summons. It is rarely more than just a reminder of the law. It has become a sport to attack the police”.