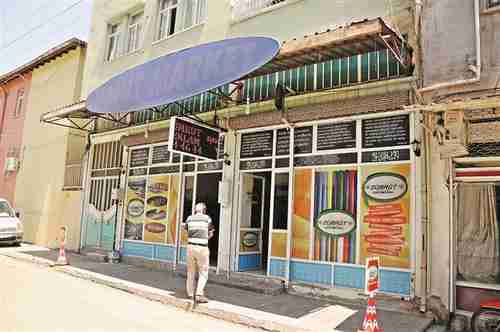 The Suruç suicide bomber is thought to have been radicalized in this building, a teahouse called ‘Islam,’ which closed eight months ago, and is now an advertising office. (Hurriyet)

Protesters rioted and clashed with police in Istanbul and other cities across Turkey in anti-government demonstrations protesting the policies of Turkey’s president Recep Tayyip Erdogan, which many people blame for Monday’s massive terrorist attack in the town of Suruç, on Turkey’s border with Syria. It is believed that the so-called Islamic State (IS or ISIS or ISIL or Daesh) was behind the suicide bombing in Suruç, targeting a large meeting of mostly young pro-Kurdish activists who were discussing plans to help rebuild the town of Kobani, which the Kurds had captured from ISIS in January. There were 32 dead and more than 100 others injured.

Turkish police have identified Seyh Abdurrahman Alagöz, a 20-year-old Turkish male Kurd, as the person behind the suicide bombing. Another female suspect has yet to be identified. It is believed that Alagöz went to Syria six months ago to join ISIS.

The military wing of Turkey’s outlawed Kurdistan Workers’ Party (PKK) said on Wednesday that it had killed two Turkish police officers in a town on the Syrian border as a reprisal for Monday’s suicide bombing in Suruç. According to a web site statement: “A punitive action was carried out… in revenge for the massacre in Suruç.”

The killings took place in Ceylanpinar, a Turkish district that has been severely affected by fighting between rival factions across the border in Syria.

Turkey has been for decades the target of terrorist attacks by the Kurdistan Workers’ Party (PKK), although in recent years the PKK has been talking about a peace agreement in return for greater freedoms for Kurds in Turkey. Hurriyet (Ankara) and Today’s Zaman (Istanbul)

Monday’s massive terrorist attack in the town of Suruç, on Turkey’s border with Syria, has goaded the Turkish people, especially the Turkish Kurds, into believing that Erdogan has allowed Syria’s civil war to come to Turkey.

Turkey’s president Recep Tayyip Erdogan has said many times in the past that the Kurds are more dangerous than ISIS, but Erdogan may have to change his tune after Monday’s attack. According to an MP from Turkey’s pro-Kurdish People’s Democratic Party (HDP), being interviewed on the BBC:

People are incredibly angry. They are angry that Turkey is turning into Syria. They’re shocked, they’re angry, and they’re particularly angry at Mr. Erdogan, who is the president of Turkey, for his support to all kinds of groups in Syria, and they blame him for also supporting ISIS.

The MP responded to the statement that it is now believed that Monday’s suicide bomber was a Kurd who had joined ISIS:

Many Kurdish people join ISIS. Even in my home town, hundreds of youth went there are joined them, and definitely one needs to work on this kind of issue. It’s going to get dangerous. There are so many nobodies who want to be somebody, and they [ISIS] are somehow able to recruit those people. Very openly they’re doing all kinds of campaigns here, recruiting events, even in my home town, and they always even do military training in the hills around my home town. And they have all kinds of support.

The evidence given that Erdogan supports ISIS consists of his statements that the Kurds are more dangerous than ISIS, and also that Erdogan did nothing to support the Kurds in the fight in Kobani. Erdogan has furiously denied any support for ISIS, and no real evidence has been presented that he has.

The real story is probably much more nuanced.

I have been writing since 2011 that Syria’s president Bashar al-Assad was a genocidal psychopath who was using torture and mass slaughter, killing innocent women and children who were peacefully protesting, to try to exterminate the Sunnis in Syria. A few months later, some occasional news stories began to appear about Sunni jihadists from other countries, from Asia to the Caucasus to North Africa, who were coming to Syria to fight al-Assad. ISIS did not exist at that time, but I speculated that if these foreign jihadists kept arriving, then they would form a terrorist fighting force in Syria, and then return to their countries and use their terrorist skills at home.

Erdogan’s Syria policy has had the objective of regime change, removing al-Assad, with secondary objectives of defeating ISIS and of preventing the Kurds from forming any kind of Kurdistan state in Syria, because they would also demand part of Turkey for Kurdistan.

So those have the elements of Erdogan’s foreign policy towards Syria, but now that policy is backfiring and falling apart. Now Turkey is threatened with terror attacks by both PKK Kurds and ISIS, the latter including ISIS Kurds. That is that Syria’s war is now in Turkey, and many Kurds blame Erdogan for the rise of ISIS, while other disaffected Turkish Kurds are joining ISIS, possibly with the purpose of a war against Erdogan’s government. AP and Lowy Institute (Australia)

Greece’s parliament worked deep into the night, and early on Thursday morning approved resolutions demanded by lenders as prerequisites for opening negotiations for a third bailout, for 86 billion euros.

The approved reforms will affect the courts, the civil procedure code, and the banks, causing them to adopt a regulatory system used by other European Union countries.

Conservative forces within Europe still insist on their plans to kick Greece out of the euro. We chose a compromise that forces us to implement a program we don’t believe in and we will implement it, because the choices we have are tough.

As a separate matter, Greece is planning for the reopening of the Athens Stock Exchange, after being closed for four weeks. However, severe restrictions on buying and selling will be in place to prevent a complete stock market crash.

Prolonged restrictive measures could lead to a downgrade by MSCI Inc. to “standalone market,” a designation that includes Jamaica, Botswana, Zimbabwe and mainland China, from emerging market. That might mean trading and prices would decline even further and Greek companies would be cut off from a crucial source of funding. Kathimerini and Bloomberg