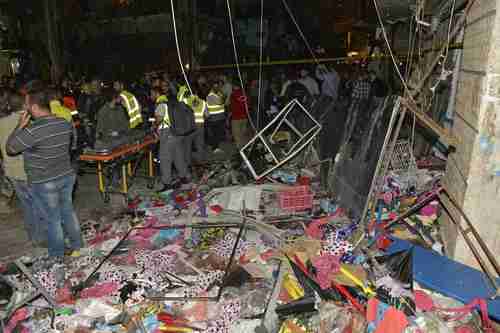 Lebanon on Friday was mourning the deaths of people killed by two massive suicide bombs in Beirut on Thursday. ( “13-Nov-15 World View — ISIS claims credit for suicide attack on Hezbollah in Beirut Lebanon”)

Unlike France, Lebanon cannot declare a state of emergency and close all its borders. In many ways, Lebanon is the epicenter of the proxy war in Lebanon, as Hezbollah has supplied thousands of fighters the last two years to support Syria’s Shia/Alawite president Bashar al-Assad whose objective is to exterminate as many Sunni Muslims in Syria as possible.

Lebanon’s government is almost in a state of paralysis, because the groups that respectively oppose and support Hezbollah cannot agree on anything. The government cannot even agree on a process for electing a new president, so the country has gone for months with no president.

In Lebanon, the political situation is so fractured that the country has been unable to elect a president for months. Hezbollah militias are fighting in Syria, but that is because Hezbollah leader Sayyed Hassan Nasrallah is forcing them to, and, ironically, that’s because Nasrallah’s puppetmasters in Iran are forcing him to do so.

In Beirut, the paralyzed government has not been able to collect the garbage for almost four months. Residents are just dumping their garbage in the streets, since they have no other way to dispose of it. In the last couple of weeks, the rainy season has begun. Video showing uncollected garbage swept down a flooded street in Beirut recently went viral. There’s a threat of polluted water, cholera and other diseases.

The attack was carried out two days before talks were set to begin in Vienna in a renewed international effort to find a political solution to the Syria conflict.

Thursday’s sectarian bombing in Beirut exacerbates the sectarian tensions throughout the Mideast. The bombing killed 43 people and wounded hundreds, but across the Mideast thousands of people are killed every day in Syria, Iraq, Yemen, Libya, and other areas of conflict. Generational Dynamics predicts that the Mideast is headed for all-out war. CNN and Naharnet (Lebanon) and VOA (6-Nov)

France closes borders in state of emergency after Paris attacks

At least 150 people were killed in a wave of coordinated bomb and gun attacks around Paris late Friday, continuing into Saturday morning. This was the deadliest violence to strike France since World War II.

Gunmen and bombers attacked busy restaurants, bars and a concert hall at six locations around Paris on Friday evening, killing scores of people in what a shaken President François Hollande described as an unprecedented terrorist attack.

Unlike the Beirut attack, which was practically ignored in the West, the Paris attack is receiving hours of continuous and exclusive coverage of pretty much every Western news media outlet.

A Reuters witness heard five explosions outside the Bataclan music hall, where up to 118 people were estimated to be dead and reports said armed attackers had shot concertgoers one by one before elite police units stormed the building and killed four attackers.

France’s president François Hollande announced a mass mobilization of security forces and a state of emergency for the entire country:

As I speak, terrorist attacks of unprecedented proportions are underway in the Paris area. There are dozens killed. There are many injured. It is a horror.

We have, on my decision, mobilized all forces possible to neutralize the terrorists and make all concerned areas safe. I have also asked for military reinforcements.

They are currently in the Paris area to ensure that no new attack can take place.

I have also called a cabinet meeting that will be held in a few minutes.

Two decisions will be taken: A state of emergency will be declared, which means some places will be closed, traffic may be banned and there will also be searches which may be decided throughout [the Paris area].

A state of emergency will be proclaimed throughout the territory [of France].

The second decision I have made is to close the borders. We must ensure that no one enters to commit any crimes and that those who have committed the crimes that we have unfortunately seen can also be arrested if they should leave the territory.

This is a terrible ordeal which once again assails us. We know where it comes from, who these criminals are, who these terrorists are. …

Faced with terror, France must be strong, it must be great and the state authorities must be firm. We will be.

Many people fear that there will be further attacks. After the terrorist attacks on Charlie Hebdo in Paris in January of this year. Those attacks were followed additional attacks on a Jewish supermarket, and a similar situation is feared this time.

Hollande says that the borders are closed so that no one else can enter France to commit further crimes. It is not clear to me how long the border closings can be maintained, since there is supposed to be freedom of travel throughout Europe’s Schengen zone, which includes France. There are something like 6,000 migrants entering the EU every day, and they can’t be stopped any more than you can stop a tsunami. France 24 and Deutsche Welle and Global News

Europe’s Schengen zone is put at risk by Paris attack

Early in the day on Friday, hours before the terror attack occurred in Paris, Austria announced that it will build a 3.7 kilometer fence along its border with Slovenia. This is the first time that a fence will have been erected between two members of Europe’s Schengen zone.

France has responded to the attacks by closing all its borders, but it will be impossible to maintain that closure for long. The Paris attack is certain to encourage more countries to abandon Europe’s prized open-border Schengen zone. EuroNews