Iran celebrated the 37th anniversary of the 1979 Islamic revolution on Thursday, with plenty of anti-America, anti-Israeli, and anti-Western sentiment on hand, beyond re-enacting the capture of 10 American sailors in January.

NBC News reports “tens of thousands of Iranians” marching through Azadi Square in Tehran, chanting “Death to America and Israel!” and waving signs with anti-Western slogans:

Ahmad Norouzi, a nurse, wore a bandana on his head that read: “We will not allow foreign influence.”

“I have a message for Obama,” the 37-year-old said. “You can’t do anything to us and anything you say is a lie.”

“I am happy that I was able to come here today, and as an Iranian I can put my fist in America’s mouth and say Death to America,” said Sanaz, who would only give one name.

Among the signs spotted by NBC were one that denounced a “global terror mafia” headed by the “US Regime,” and another depicting President Barack Obama and Secretary of State John Kerry with Pinocchio noses.

Gulf News spotted a banner that showed a fist draped with the colors of Iran’s flag punching Barack Obama’s teeth out. Other celebrants contented themselves with traditional “Death to America” and “Death to Israel” signs, or posed for selfie photos with the latest Iranian long-range ballistic missile.

There were evidently several re-enactments of the American sailors captured by Iran, including some using schoolchildren. ABC News reports some of the re-enactments used overweight men and women to represent the American prisoners, while others marched them along with bags over their heads. 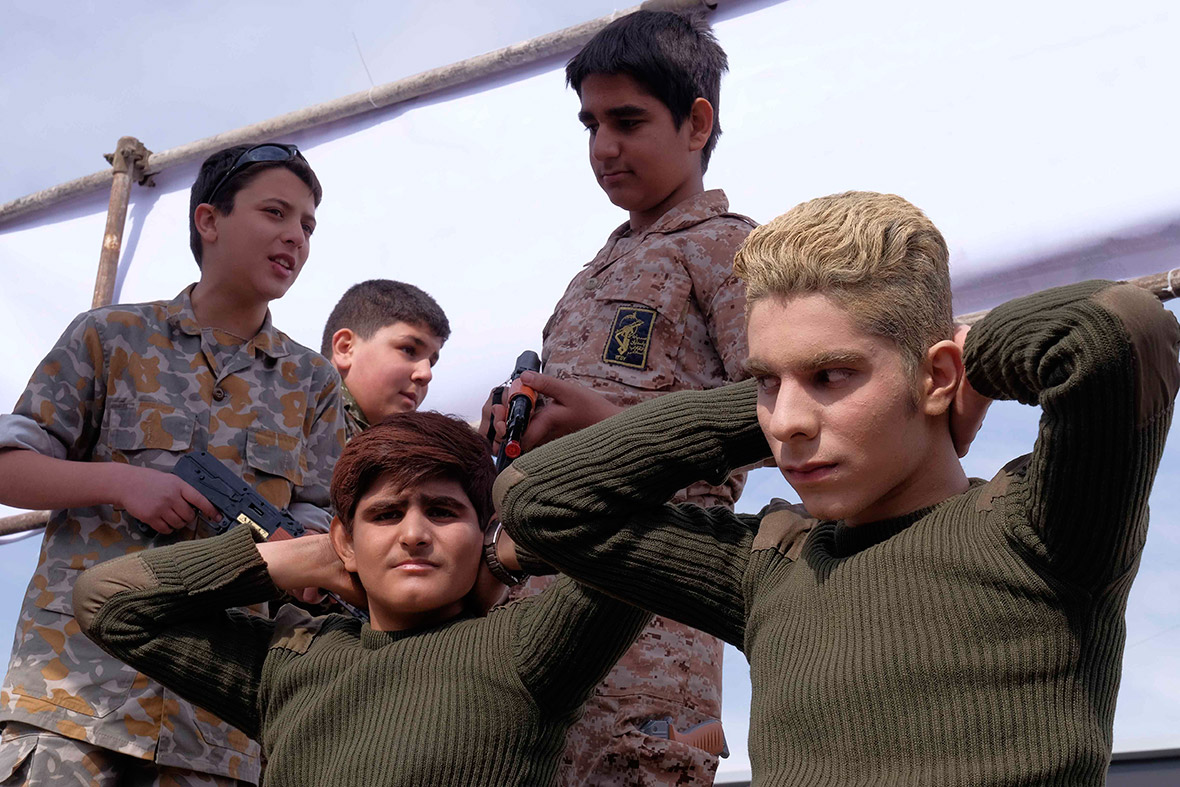 That is the U.S. Presidential seal on the mock hostages’ uniforms, by the way.

The BBC reports one troupe used a man in drag to represent the captive female American sailor, while another had a mock prisoner with a tissue over his face — a mocking reference to the recently-released Iranian propaganda video of an American sailor weeping in captivity.

“Our nuclear victory showed to the world that Iranians are capable of winning any battle, including diplomatic battles,” proclaimed Iranian President Hassan Rouhani during his address to the crowed, as reported by NBC News.

The Observer transcribes a similar message from Mohammed Reza Naqdi, commander of the Basij paramilitary force:

Mr. Naqdi spoke of the tremendous tension between Shiites of Iran and the Sunnis of Saudi Arabia and elsewhere in the Muslim world. He said: “the hundreds of Revolutionary Guards generals fighting in Syria will never repeat the mistake of the Shiite Caliph Hassan ibn Ali who surrendered leadership of the Muslim world to Muawiyyah bin Abi Sufyan.”  He was referencing the Seventh Century when the second Imam of Shia decided to surrender at Kufa to the Sunnis.

Moving on to the modern world, Mr. Naqdi explained that the Shah of Iran was weak because he was allied with the United States and the West. He then elaborated, arguing that it is impossible to compare his high-flying country to Iran under the Shah’s rule, when it was subordinate to the American administration. Today, he went on, the United States “subordinates to Iran’s dominance in the Middle East and it cannot act in the region without getting the approval of the Supreme Leader of Iran.”

One bit of good news about the Revolution Day celebration comes from the BBC, which notes that not all Iranians were delighted by the spectacle. A few of them managed to get online to describe the festivities as “bizarre,” compare them to a circus, and denounce them as “cheap, ugly, and ridiculous.”

“What are they trying to prove by this ridiculous show? Even if Iran and America are at war against each other, which they are not, what kind of messages are these kinds of cheap acts trying to convey to the American people, who like us, love their soldiers?” one Iranian asked on Facebook.