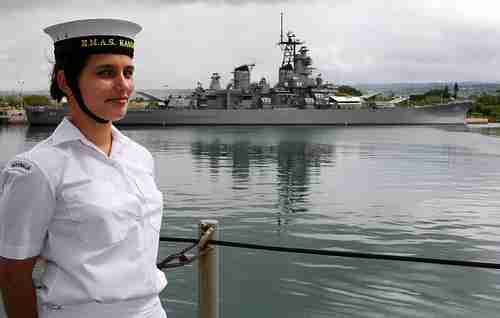 2.77 Australia does not take sides on competing territorial claims in the South China Sea but we are concerned that land reclamation and construction activity by claimants raises tensions in the region. Australia opposes the use of artificial structures in the South China Sea for military purposes. Australia also opposes the assertion of associated territorial claims and maritime rights which are not in accordance with international law, including the United Nations Convention on the Law of the Sea (UNCLOS).

2.78 Australia has called on all South China Sea claimants to halt land reclamation and construction activities, which involves the dredging of sea floor material for use as landfill in creating artificial structures . Australia has also called on all claimants to exercise self-restraint, take steps to ease tensions and refrain from provocative actions that could increase tension and uncertainty in the region . Australia is particularly concerned by the unprecedented pace and scale of China’s land reclamation activities.

China responded with heavy criticism of the white paper:

We are seriously concerned about and dissatisfied with the white paper’s negative statement on issues concerning the South China Sea and the development of China’s military strength.

It is hoped that the Australian side would take a correct and positive view of China’s development and strategic intention, take concrete steps and make joint efforts with China to increase mutual trust and safeguard regional peace, stability and growth.

We definitely do not want to see tensions or arms race in the region. We hope that the Asia-Pacific would be a region where people from all countries enjoy peace, stability, development and prosperity, and that relevant parties would stop the so-called joint military drills and patrols, and cease constant reinforcement of military buildup in the Asia-Pacific.

The naval buildup is in one sense a reaction to several years of former prime minister Julia Gillard’s Labor government, which did not consider China to be a military threat, and which substantially cut defense spending. The current prime minister, Malcolm Turnbull, whose government produced the new white paper, is making Australia a part of a military buildup that is occurring throughout the Pacific.

Japan has recently reinterpreted the “defense-only” clause of its constitution to permit “collective self-defense,” which would permit foreign wars. The Philippines has invited the US Navy back to its Subic Bay naval base after throwing us out in the 1990s. India is about to deploy its first nuclear-armed submarine. Vietnam is preparing for a repeat of its 1979 border war with China. Basically, China is scaring the crap out of everyone in the region, and they are all beefing up their militaries to prepare for war.

The white paper contains the words “rules-based” 57 times, indicating an anxiety over the fact that China is not following the established international rules. Australia is looking to the United States to be the one to enforce the rules:

In other words, Australia expects the United States to continue to be Policeman of the World, even if some American politicians do not. Australia Defense White Paper (PDF) and Sydney Morning Herald and S. Rajaratnam School of International Studies (RSIS) and Guardian (London) and Lowy Institute (Australia)

China threatens Australia with economic retaliation for criticizing it

Many people believe that China will never go to war with anyone because it is bad for business. If that principle were true there would never be any wars. In fact, the opposite is true, as China showed in September 2012, when China declared economic war on Japan. Chinese media is now hinting at economic reprisals against Australia as retaliation for criticizing China:

Unsettled by the rapid rise of China, in recent years Australian officials such as foreign and defense ministers have switched from discretion to blatant criticism of China and enhanced coordination with the US and Japan. However, at the same time Canberra walks a fine line by promoting strategic and economic cooperation with China given the latter’s sizable market and investment capability. […]

How can these politicians believe that they can benefit enormously from relations with China and meanwhile feel free to castigate China in disputes? […]

[S]uch hypocrisy will amount to nothing but harm to Australia’s relationship with China.

However, any suggestion of economic sanctions may be an empty threat because China is highly dependent on business with Australia. Australia is a major supplier of commodities to China, and China has plans to use the large ports and railways of the Australian firm Asciano as a crucial part of its logistics chain in its “One Belt, One Road” initiative. Global Times (Beijing) and Reuters and Asia Times