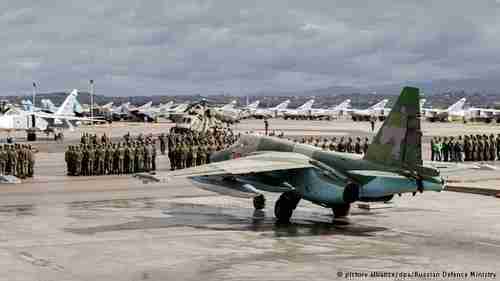 I believe that the objectives set before the Defense Ministry and the Armed Forces have on the whole been achieved. I therefore order the Defense Minister to begin the withdrawal of the main part of our task force from the Syrian Arab Republic starting from tomorrow. […]

Meanwhile our bases, the naval one in Tartus and the air one at the Humaymim aerodrome, will operate as before. They should be reliably protected from the ground, from the sea and from the air. This part of our military task force was traditionally stationed in Syria, for many years before, and these days it will have to perform the very important function of monitoring the ceasefire and creating conditions for the peace process.

Russia will keep its two military bases, and will continue to launch air strikes as before. Other reports indicate that Russia will leave its advanced S-400 air missiles would stay in Syria. These missiles have a range of 400 km, which covers a great deal of Turkey, Iraq and Israel. In addition, Russia’s warships in the Caspian and Mediterranean seas are expected to remain and be prepared to launch cruise missiles. This means that Russia can re-deploy at any time, if desired. Reuters and Eurasia Review

Opinions vary on why Russia pulled back from Syria now

Putin says “that the objectives set before the Defense Ministry and the Armed Forces have on the whole been achieved,” but nobody I heard seriously believes that. The major stated objective was to “end terrorism” in Syria, but al-Qaeda linked Jabhat al-Nusra (al-Nusra Front) and the so-called Islamic State (IS or ISIS or ISIL or Daesh) are both still active in Syria.

In fact, Russia never really targeted either al-Nusra or ISIS. Since 2011, when Syria’s Shia/Alawite president Bashar al-Assad began massacring innocent Sunni women and children as if they were cockroaches to be exterminated, Russia has simply joined in the slaughter, flattening entire Sunni villages with missiles and chlorine-laden barrel bombs, leaving the al-Nusra and ISIS free to continue.

There is no question that one of Putin’s objectives was a larger influence and military presence in the Mideast, and with two military bases in Syria protected by advanced S-400 missiles, he has certainly met that objective. Another objective was to save Bashar al-Assad’s army from defeat, as the army was near collapse before the Russians intervened.

But there were huge downsides for Russia as well, as I described last year in “13-Sep-15 World View — Russia opens a dangerous new chapter in Syria and the Mideast”.

The Russians have no desire to be involved in another quagmire like the one they were in during the 1980s in Afghanistan. The 1980s war was portrayed by Salafists as a Christian country invading a Muslim country. Many Salafists in Saudi Arabia went to fight Russia in Afghanistan, and that led to the rise of Osama bin Laden and al-Qaeda. Today, Saudi Salafists portray Russia’s intervention into Syria as, once again, a Christian invasion of a Muslim country. This time, many jihadists from Chechnya are receiving training in Syria, and are prepared to use those skills back in Russia, and Putin may believe that a partial withdrawal will slow that trend down.

Another issue is how long the fighting is going to go on. Russia’s economy is under severe pressure, and the government is rapidly depleting its foreign reserves because of the collapse in the price of oil. Russia simply cannot afford another military quagmire, even if Putin wanted one.

Furthermore, now that Russia has its bases and missiles in place, Putin may feel that there is no further need to continue fighting. There have been many, many stories in the past few weeks that Putin and the Obama administration are united in pushing the current Geneva peace talks to bring the fighting to an end. As a byproduct, it is hoped that this would bring an end to the tsunami of Syrian refugees flooding into Turkey and the European Union.

Iran is no different. Iranians have not forgotten the brutal treatment they received from Saddam Hussein and the Sunnis in Iraq during the 1980s Iran/Iraq war, and Iran’s Supreme Leader Seyed Ali Khamenei may well have the same motivations as al-Assad.

Finally, it may be that even Vladimir Putin is sickened and disgusted with supporting the greatest sociopath of the modern era. As I’ve written many times, Bashar al-Assad is the greatest genocidal monster in today’s world, comparable to Hitler, Pol Pot, Mao Zedong and Stalin from the last century. For years, he has been killing thousands of Syrian civilians every week with complete impunity, using Russian-supplied barrel bombs on civilian neighborhoods. And he has used sarin chemical weapons on civilians. He uses the most gruesome forms of torture on a personal, individual scale, as well as on a mass scale. There is no mass weapon of destruction, nor any gruesome form of torture, that he will not use to satisfy his psychopathy.

Putin and Khamenei have enthusiastically aided and supported these horrendous crimes against humanity, but one possibility that we have to consider is that Putin, at least, can take only so much of al-Assad’s sickening sociopathy. So that is a possible personal motive of Putin in announcing the partial withdrawal.

However, Syria’s army was losing ground before Russia’s intervention, and Syria’s army may start losing ground again. This is going to make al-Assad and Khamenei very unhappy, and so it’s possible that this Russian withdrawal is not only partial but also temporary. Guardian (London) and Deutsche Welle (Berlin) and Debka and American Enterprise Institute