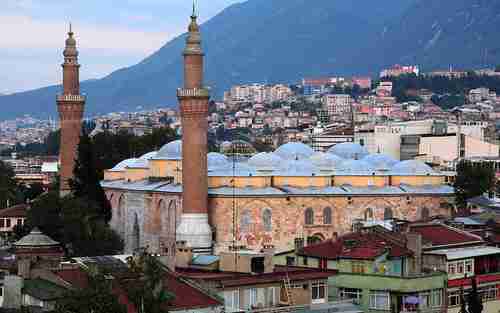 A female suicide bomber blew herself up in the Turkish city of Bursa on Wednesday, wounding 13 people. Reports indicate that the bomber was a 25-year-old woman.

Turkey has been suffering from a string of terrorist attacks on large cities, including Ankara and Istanbul. The attacks have been perpetrated both by the so-called Islamic State (IS or ISIS or ISIL or Daesh) and also by the separatist Kurdistan Workers’ Party (PKK).

As I reported yesterday, the PKK has promised to escalate its war against the government of Turkey. Turkey’s prime minister Ahmet Davutoglu responded that “Turkey will be saved soon from this terrorism problem completely,” presumably by military action against the PKK.

However, as yet, no one has claimed credit for Wednesday’s suicide attack on Bursa.

Bursa was the first capital of the Ottoman Empire.

Today, it is a large commercial city, but still is built around the mosques, mausoleums and other sites from its Ottoman ancestry. The bombing took place near Bursa’s historic Grand Mosque, built between 1396-99. Daily Sabah (Istanbul) and AFP and Bursa’s Grand Mosque

Austria votes to close border with Italy to slow refugees

Austria’s Parliament on Wednesday voted a set of harsh regulations to stem the flow of migrants crossing the border from Italy.

According to the law:

It is thought that the Parliament passed the law in response to an overwhelming victory by the far-right Freedom Party in the first round of Austria’s presidential elections on Sunday.

Human Rights Watch is denouncing the new laws as “a blow to the rights of asylum seekers.”

The possibility of closing the Brenner Pass is blatantly against European rules, as well as against history, against logic and against the future.

There are large refugee camps in Greece on the border with Macedonia, and in Calais, France, near to entrance to the Euro tunnel to Britain. As migrants enter Italy after crossing the Mediterranean Sea from Libya, we may eventually see a large camp of migrants on Italy’s border with Austria. The Local (Austria) and Guardian (London) and France 24 and The Local (Italy) and Breitbart News