Thomas Charles Linville, a U.S. Marine veteran who lost his leg in Afghanistan, reached the summit of Mount Everest on May 19 after two failed attempts to climb the world’s largest mountain.

Linville was working as an explosives ordinance disposal technician in Helmand Province, Afghanistan, when, in 2011, he was severely injured in an IED blast. After a two-year, unsuccessful battle to save his leg, in 2013, doctors were forced to amputate Linville’s leg below the knee. 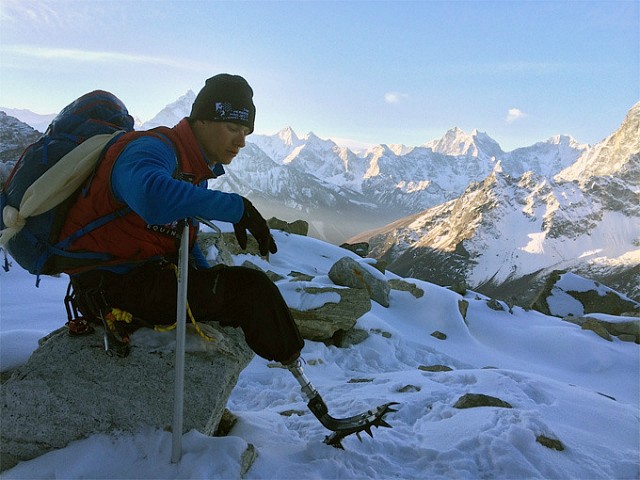 Following his surgery, Linville became a board member of The Hero’s Project, an organization that is dedicated to working with Marines and the military community at large. The group that Linville was climbing with was Operation Everest 2016, a group associated with The Hero’s Project.

Linville made his successful journey to the summit during a particularly deadly period for climbers on the mountain. In the days following Linville’s successful climb, four people have lost their lives.

Since Friday, four people have been killed on their descent from the summit. The descent is historically known as the most dangerous part of the climb. According to the New York Times, “researchers have found that they most often die during the descent, after being ravaged by low pressure, oxygen scarcity and severe cold in what is called the death zone, above 26,000 feet. Victims commonly show symptoms of high-altitude cerebral edema, a fatal swelling in the brain.”

On Friday, Eric Arnold, a Dutch climber, died along with his fellow group member Australian Maria Strydom on Saturday. On Sunday, a third climber, Subhash Pal, an Indian man, died on Sunday. All three of these climbers died of altitude sickness. A fourth man, Phurba Sherpa, was killed on Friday when he fell.

Since 1953, when Everest became a destination for climbers around the world, 250 people have died in attempting to reach its peak.