Pakistan reopens border crossing with Pakistan after week of gunfights 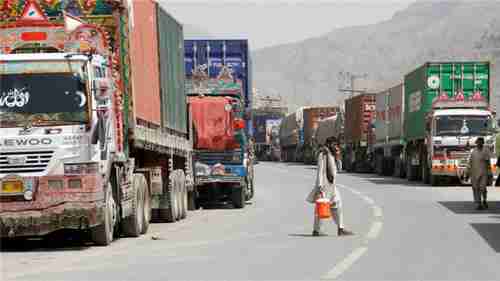 Pakistan reopened the Torkham border gate, a major border crossing with Afghanistan on Saturday, after keeping it closed for almost a week amid cross-border gunfights that killed at least one Afghan border police officer and one Pakistani army major.

Thousands of vehicles normally pass through the Torkham crossing every week, making it a vital trade link between the countries. During the last week, there have been long lines of trucks backed up and waiting at the Torkham gate, on both sides of the Khyber Pass, a well-known mountainous transit route linking the two countries.

A turning point for Pakistan was reached after a horrific January 20 terror attack on Bacha Khan University in Charsadda in northwest Pakistan, killing 21 lives including a professor. Investigation showed that the perpetrators had crossed the border from Afghanistan, and then crossed back. Pakistan’s army decided that it was necessary to build a fence along the border, and to control the border crossings.

Afghanistan opposed this plan because hundreds of trucks and thousands of people cross the border every week for trade, work and medical care, and because the location of the border is in dispute. Pakistan went ahead with the construction of the border gates, and that lead to the gunfights last week.

Pakistan finally reopened the border crossing on Saturday, but will only allow people to cross from Afghanistan to Pakistan if they have the proper documents – a visa and a valid passport. Since thousands of people have been crossing the border for years with no documents, this crisis is far from over.

Thousands of Afghans conducted protests earlier this week in two Afghan cities, Jalalabad and Lashkar Gah, chanting “Death to Pakistan.” Afghanistan’s ambassador to Pakistan, Dr. Omar Zakhilwal, has threatened to resign. “I don’t see any reason for me to continue my current job” unless Pakistan suspends its construction of new installations pending negotiations.

However, a Pakistan official says, “This gate (is) considered essential to check and verify documentation of all border crossers.” CNN and Dawn (Pakistan) and Khaama (Afghanistan) and Al-Jazeera

Tensions grow over the Durand Line defining the Pak-Afghan border

According to Pakistan’s military, “In order to check movement of terrorists through Torkham, Pakistan is constructing a gate on (our) own side of the border as a necessity to check unwanted and illegal movement.” According to Pakistan, the Torkham border gate is being built 37 meters within Pakistan. However, Afghanistan disagrees, saying that the gate is being built one kilometer within Afghanistan.

The disagreement is over the border line separating the two countries. In 1893, Sir Mortimer Durand, Britain’s Indian foreign secretary at the time, signed an agreement with Abdur Rahman Khan, the Amir of Afghanistan, defining the 2640 km border, known as the “Durand Line.”

However, after the 1947 Partition war that partitioned the Indian subcontinent into India and Pakistan, Afghanistan reneged on the agreement, and asserted claims to additional territory with Pakistan. Since then, efforts to renegotiate the agreement have been torpedoed by both sides. Since 9/11/2011, the Durand Line has taken on special significance, because of Afghan war and by the bombing by American warplanes and drones of Taliban targets in Pakistan’s tribal area.

It seems pretty certain that the border crossing crisis is far from over. Thousands of people are going to be inconvenienced by Pakistan’s requirement that anyone crossing the border must have a visa and valid passport, and anyway, Afghanistan is certain to renew is claim that the Durand Line is not valid, and Pakistan’s new border crossing is actually on Afghan territory. AFP and The Diplomat and The Nation (Pakistan)