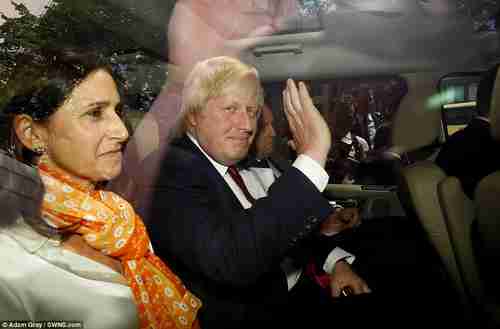 Boris Johnson, next to his wife Marina, waves goodbye on Thursday after standing down (Daily Mail)

It is being described as a complete shock, totally unexpected – that Boris Johnson, the former mayor of London and the leader of the successful campaign to win the Brexit referendum, which mandates that the UK leave the European Union, announced that he would not run to replace David Cameron as leader of the Conservative Party and become Prime Minister on September 9.

Reports indicate that Boris Johnson was stabbed in the back by a close former ally, Michael Gove. Gove had said repeatedly when asked that he (Gove) was not qualified to be PM, but that he was going to support Johnson and even be his campaign manager. But early on Thursday, Gove flip-flopped and announced that he would run. He announced, “I have come reluctantly to the conclusions Boris cannot provide the leadership or build the team for the task ahead.” He added that he has decided that he can.

Although Johnson’s announcement was a shock, it cannot have been totally unexpected, since Johnson is completely unqualified. His pro-Brexit campaign emotionally targeted anti-EU nationalism and anti-immigrant anxieties about both east European Catholics and Syrian Muslims. Once his side won the referendum vote, he almost completely vanished from view, and it was clear that he did not have the vaguest clue what he had been talking about during the campaign, or what to do after winning.

The Brexit outcome has done a great deal of damage to the UK and the EU, and is continuing to do more damage, as we’ve been reporting the last few days. Perhaps Boris Johnson should be thanked for standing down before he did any more damage. After all, sometimes it seems that the most successful politicians are also the most destructive politicians. Daily Mail (London)

After decades of destroying the economy, Zimbabwe wants investors

In a move of total desperation, Zimbabwe on Thursday announced that foreigners who invested their money in Zimbabwe will be permitted to repatriate their profits and dividends back to their home countries. Previously, investors were required to leave all money in Zimbabwe.

As in Venezuela and Puerto Rico, the economy of Zimbabwe is crashing. There are shortages of fuel, sugar and cooking oil. Cash withdrawals from banks are strictly limited. ATM queues typically contain dozens of people, and frequently the cash machines run out of money. School teachers have been told that they will not be paid, and many don’t even have money to buy food.

The change in policy is driven by total desperation. In order to keep the economy from crashing completely, Zimbabwe’s Finance Minister Patrick Chinamas is visiting business leaders in Paris to beg for further investments. Currently Zimbabwe owes 10 billion US dollars to the IMF, World Bank and the African Development Bank, with $1.86 billion in debt repayments in arrears. Chinamas is promising that the arrears will be repaid, but Zimbabwe has no money with which to pay the arrears.

Mugabe is from the Shona tribe. Shortly after taking power in 1980, he consolidated power by launching “Operation Gukurahundi” (The rain that washes away the chaff before the spring rain). During that campaign, accomplished with the help of Mugabe’s 5th Brigade, trained by North Korea, tens of thousands of people, mostly from the Ndebele tribe, were raped, tortured and slaughtered.

As recently as the 1999, Zimbabwe was still the breadbasket of Africa, exporting up to 500,000 metric tons of surplus food. By 2003, Zimbabwe was starving. What happened during those three years was a Marxist socialist “land reform” program by Robert Mugabe that confiscated 4,500 white-owned commercial farms and redistributed the property to his own Shona ethnic group. After 2003, more and more Zimbabweans were dying of starvation, because Mugabe has destroyed the farm infrastructure. By 2008, the official rate of inflation was 231 million percent. ( “24-Feb-2014 World View — Mass murderer Robert Mugabe of Zimbabwe has 90th birthday”)

In 2009, Mugabe abolished the Zimbabwe dollar, which was not worth the paper it was written on anyway. The US dollar and the South African rand became the official currencies. But instead of ending the destructive land reform policies, Mugabe added on a new one: Indigenization.

So now, with Zimbabwe’s Marxist economy close to total collapse, Mugabe’s finance minister is in Paris to convince the capitalist investors to pour more money into Zimbabwe. It is laughable except for the fact that so many people are suffering because of Mugabe’s destructive Marxist policies. RFI and Financial Times (27-Jun) and Independent (Zimbabwe) and Zimbabwe Government and The Zimbabwean

Venezuela’s Socialist president Nicolás Maduro and his predecessor Hugo Chávez are also among the world’s most successful politicians, as measured by the amount of destruction they have brought about in their own country. Like Mugabe, they’ve destroyed Venezuela’s economy with Marxist policies, even though its oil reserves should make it one of the wealthiest economies in the world. ( “15-May-16 World View — Venezuela economy close to collapse as Maduro orders jailing of factory owners”)

Puerto Rico faces $70 billion in total debt, a 45 percent poverty rate and a shrinking population, as a result of years of massive spending on social programs. ( “27-Apr-16 World View — Puerto Rico headed for new financial default on May 1”) Puerto Rico was saved from default on Friday, July 1, as President Obama signed a Puerto Rico rescue bill into law on Thursday.

Let’s not forget Cuba and North Korea, two more potentially wealthy countries that have been destroyed by their successful politicians. Washington Post 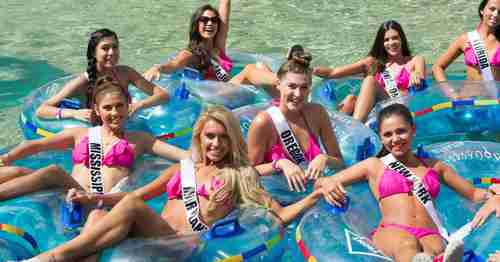 The sexist, outdated swimsuit competition will be eliminated by a thoroughly modern, feminist update

Now that Donald Trump has severed his relationship with the Miss Universe Organization, it has announced that it’s dropping the swimsuit competition from Miss Teen USA.

According to a Miss Universe statement: “In a society that increasingly prioritizes feminism and equality, watching women parade across a stage in bikinis can feel outdated.”

However, some critics complained that the contest was becoming “Sharia compliant.” The Daily Good (Iceland) and Irish Times