The first Muslim call to prayer in the post-Atatürk era from within the Hagia Sophia occurred last week on July 1.

The former basilica, converted by force into a mosque in the 15th century, hosted a call to prayer the last Friday of Ramadan this year after the government allowed regular recitations of the Quran from within throughout the Muslim holy month. Turkey’s Hurriyet newspaper notes that, while Muslim calls to prayer have been made in designated prayer areas in the Hagia Sophia complex – near the minarets Muslim conquerers added to it following the siege of Constantinople – it has not been made in the building itself in nearly a century.

The Hagia Sophia, one of the most important sites in Christian history, ceased being a mosque in 1935 after Mustafa Kemal Atatürk, the founder of modern Turkey, designated the site a secular museum.

The Hagia Sophia, and Turkey generally, has come under increasing Islamization during the tenure of current president Recep Tayyip Erdogan. Shortly before Ramadan began, Erdogan’s government announced that the site would host Koranic recitations throughout the month, an unprecedented extended use in the post-Atatürk era.

The Greek government issued a stern response to the scheduled Ramadan prayers, calling them “not compatible with modern, democratic, and secular societies” and “bigotry” in and of themselves. The center-right Greek New Democracy Party issued a statement calling the prayers “provocative and incomprehensible.”

Shortly before the beginning of Ramadan, in May, Islamist protesters took to the doors of the former basilica to demand it be designated a mosque.“Leaving Hagia Sophia closed would send a message to the West that I have no right to practice my religion… It would prompt 80 million living Turks and 50 million dead ones to cry in despair and destitution,” Ali Yegmur, chairman of the Youth of Anatolia movement, said during the protest, which corresponded to the anniversary of the conquest of Constantinople.

Turkish leaders in the ruling Islamist Justice and Development Party (AKP) and prominent clerics have appeared confident that the Hagia Sophia will soon be designated a mosque. Last year, following remarks by Pope Francis calling the Armenian genocide at the hand of Turks a “genocide,” a senior Islamic cleric in the nation said, “Frankly, I believe that the Pope’s remarks will only accelerate the process for Hagia Sophia to be reopened for [Muslim] worship,” without elaborating how the matters were related.

Istanbul is still recovering from a jihadist attack on its Atatürk airport leaving nearly 50 dead and claimed by the Islamic State. The Agence France-Presse reports that the tourist industry has been particularly hurt. “In happier years the queues outside the Hagia Sophia might have stretched an hour or longer at this time of year — today you can walk straight in and share the place with just a smattering of other visitors,” the outlet reported last week. 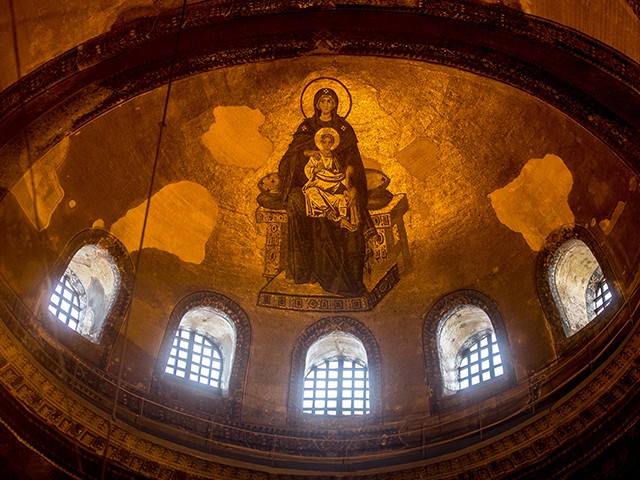 The ceiling of one of the dome’s inside the Hagia Sophia depicting the Madonna and Child. (Photo by Chris McGrath/Getty Images) 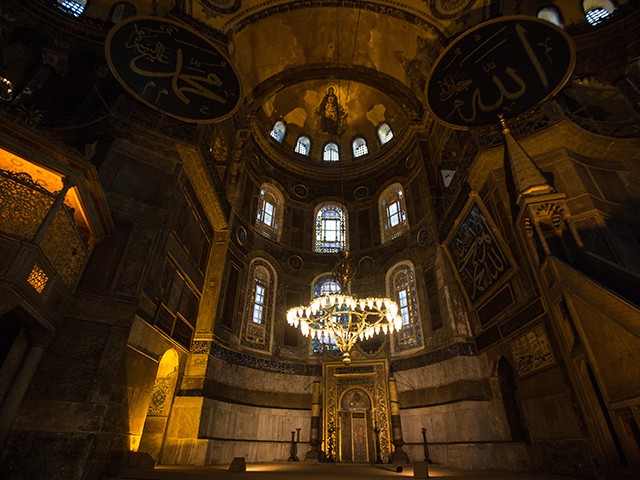 The interior of the Hagia Sophia’s dome showing the Madonna and Child in the center. The Islamic panels were added centuries later after the Muslim conquest of the city. (Photo by Chris McGrath/Getty Images)