A supporter of former Thai prime minister Yingluck Shinawatra holds a rose as she arrives at a polling station during the constitutional referendum in Bangkok. (Getty)

Thailand is on high alert following a total of 13 bombing incidents that killed four people and injured 35 others in five southern provinces between Wednesday and Friday morning. The bombings occurred at beach resorts in southern Thailand. Four people were killed and 35 others, including foreign tourists, were injured.

The characteristics of the bombings were significantly different from those usually perpetrated by jihadist groups linked to al-Qaeda or the so-called Islamic State (IS or ISIS or ISIL or Daesh).

Instead of being suicide bombings, they were improvised explosive devices (IEDs) triggered remotely by a mobile phone signal. Some analysts are saying that they were low-explosive devices detonated in times and places so that they would cause the enormous casualties that typical ISIS bombings do.

Thus, it is believed that the bombings were perpetrated by a domestic group with the objective of damaging Thailand’s tourist industry, which accounts for about 10% of the country’s GDP. Bangkok Post and CNN 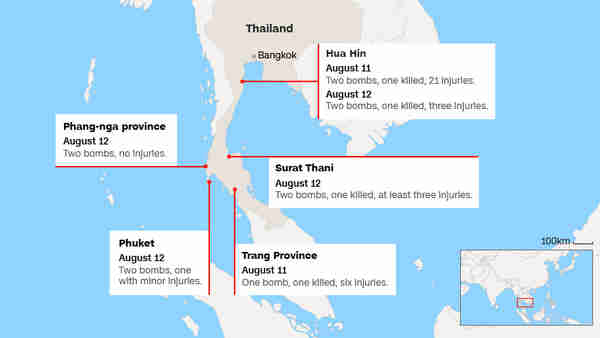 Map of southern Thailand showing sites of the bombings (CNN)

There are three major demographic groups in Thailand, and any one of the three could be responsible for the bombings.

The two we’ve been writing about most in the last few years are competing for political power.

The “yellow shirt” market-dominant light-skinned Thai-Chinese elite minority live mostly in central Thailand around Bangkok. They’re a “market-dominant minority,” meaning that even though they’re a minority, they control most of the money and businesses in the country, especially in wealthy Bangkok.

The “red shirt” dark-skinned Thai-Thai live in rural areas in northern and northeastern Thailand. Many are farmers, but they also do most of the menial labor that the elites don’t want to do, while they vastly outnumber the yellow shirt Thai-Chinese elite. The Thai-Thai are represented by the Pheu Thai political party, which has won the last five elections because of their majority. The yellow shirts used a variety of techniques, from violent protests to army coups, to overturn these elections. The Thai-Thai hero Thaksin Shinawatra was prime minister until 2006, when an army coup forced him out of office, and he now lives in exile in Dubai. His sister, Yingluck Shinawatra, then took his place and became prime minister in 2011, until the Constitutional Court forced her to step down by finding her guilty of abusing her power.

Incidentally, my favorite story in this saga occurred in December 2008. ( “Thailand government collapses, ending crippling riots from class war”.) A Thaksin ally, Samak Sundaravej, had been elected prime minister. After violent protests by the yellow shirts, he was forced to step down, because a court removed him from office because he had had a cooking show on tv, and that was somehow considered a conflict of interest. You just can’t make this stuff up.

Thailand’s army seized power in May 2014, presumably in a victory for the yellow shirts, to prevent another Thai-Thai political victory. Then, just last week, a referendum in Thailand approved a new constitution put forth by the military, in a campaign in which it was against the law to campaign against the referendum, and one could be jailed for doing so. So, not surprisingly, the referendum passed. According to analysts, the new constitution is designed to keep the Thai-Thai political party from winning the next election, so that the elites will remain in power.

So a group of red shirt or yellow shirt activists could be the perpetrators of the bombings of the last three days. Both groups have expressed opposition to the constitution that was just approved, and both groups have used protests to shut down Bangkok’s business and retail district, in order to damage the Thai economy.

The third possible perpetrators are the separatist Malay insurgents, living in southern Thailand, in the geographic region where the bombings actually took place. Thailand is primarily Buddhist, but the southern portion of the country, bordering Malaysia, is Muslim. An Islamist insurgency began in the south in 2004, and repeated terrorist attacks have killed thousands.

According to one analyst, one of the towns chosen for the bombings Hua Hin may have been chosen because there’s a large community of retirees from Europe living there, giving the bombings a maximum international significance. Hua Hin is also the Thai king’s favorite residence outside of Bangkok.

Thailand’s last generational crisis war was the 1970s “killing fields” war of Cambodia, the country next door, putting both countries into a generational Awakening-Unraveling era. All three of these groups — the Buddhist Thai-Chinese and Thai-Thai, and the Muslim Malays — are displaying typical behaviors for these eras, including peaceful protests that turn violent. The army is also using typical behaviors that we’ve seen in other countries, including Bangladesh, Burundi, Syria, Zimbabwe, and others, by using both political means and violence. The pattern will continue with increasing protests, riots and violence by protest groups, with the army will respond with increasing political repression and violence, with a continuing cycle of violence that can last for decades before another ethnic war breaks out. Chatham House and BBC