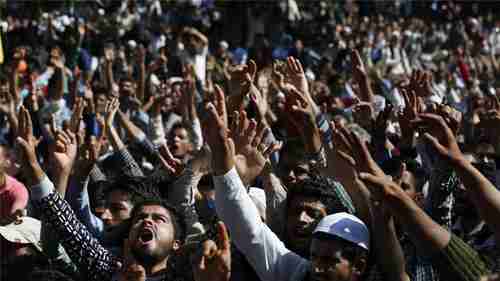 Weeks of violent clashes in India-controlled Kashmir continued on Saturday, when thousands of angry demonstrators defied a curfew to attend the funeral of Nasir Shafi Qazi, an 11-year-old schoolboy, whose body was found riddled with bullets and pellet marks.

Violent clashes in Muslim-majority Kashmir began on July 9, following the death on July 8 of Burhan Wani, a 22-year-old commander in the separatist militia Hizbul Mujahideen (HM). There have been 81 deaths and thousands of injuries. Hundreds of people have been blinded for life, having been shot by the security forces with “non-lethal” pellet guns that are often turning out to be lethal.

The Hindu vs Muslim unrest in Kashmir continues to grow, and is “organic,” meaning that it’s coming up from the people, rather than being controlled by country leaders or army generals. What we’re seeing is a repeat of the last two generational crisis wars, which were also “organic” and extremely bloody: India’s 1857 Rebellion and the 1947 Partition war. The current Hindu vs Muslim unrest continues to spiral in that direction, and I see nothing that is likely to stop it. The Hindu and AFP and Al Jazeera

The Pakistan delegate said “India’s attempts to deny its illegal occupation of Jammu and Kashmir [is] a travesty of history.” Pakistan said that give the “persistent, irresponsible flouting of international norms governing inter-state behavior by India, we are constrained to point out the abysmal human rights record of the Indian government.”

In the last two decades, the most wanted terrorists of the world have found succor and sustenance in Pakistan. This tradition unfortunately continues even today, not surprising when its government employs terrorism as an instrument of state policy…

In fact, Pakistan is a nation that practices terrorism on its own people. The sufferings of the people of Balochistan are a telling testimony in this regard. Not coincidentally, this region also serves as a base to conduct terrorism and violate human rights in a neighboring country.

The Baloch people are Shia Muslims of Iranian descent, and have been the targets of numerous bloody terrorist attacks by terror groups linked to the Pakistan Taliban and to al-Qaeda.

Apparently, mentioning Balochistan at the UN Human Rights Council has violated some kind of unwritten agreement between India and Pakistan, where they politely ignore many of each other’s human rights violations. So the Pakistan delegate struck back by saying:

Over one third of Indian territory is under a full blown peasant insurgency. There is a despicable human rights situation in Manipur, Mizoram, Tripura and Assam, and ethnic groups in India’s north-east have been battling for rights since many decades in the face of terrible repression.

The epicenter of the vitriolic disagreement between Pakistan and India continues to be Kashmir, and it’s clear that the situation gets worse every week. As I wrote above, The current unrest between India’s Hindus and Pakistan’s Muslims continues to spiral towards war, and I see nothing that is likely to stop it. Indian Express and First Post and Daily Times (Pakistan) and Telegraph (Calcutta)