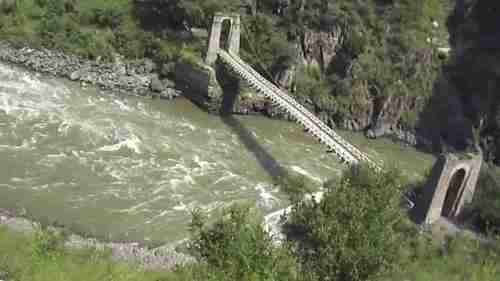 Entrance to historic Sikh place of worship in Kashmir

India’s special forces carried out a series of “targeted strikes” early Thursday morning into the Pakistan-controlled region of Kashmir. India’s military says that they were targeting several “launching pads” used by Pakistani terrorists as they prepared to cross the line of control (LOC) separating the India-controlled and Pakistan-controlled portions of Kashmir, in order to carry out terrorist attacks. India’s military says that dozens of militants were killed.

This is a new escalation in the conflict between India and Pakistan, because it is the first time in recent years that Indian soldiers crossed over into Pakistani territory.

The targeted attacks come just a few days after a major September 18 terrorist attack on an Indian army base in Uri in Kashmir. There was a five-hour firefight, and at least 17 soldiers were killed, as were the militants. This was the worst militant terrorist attack in Kashmir in years.

Indian officials promised retaliation for the Uri attack, and Indian media have been calling for a swift counter-attack. Now that one has occurred, Indian officials are congratulatory. A statement by India’s cabinet congratulated the prime minister for “decisively ordering this surgical operation to demolish the bases and camps of those acting with impunity against our citizens,” and added, “The operation has been executed with clinical and professional precision by the brave men of the Indian army.”

We will destroy India if it dares to impose war on us. Pakistan army is fully prepared to answer any misadventure of India. We have not made atomic device to display in a showcase. If such a situation arises we will use it and eliminate India.

A belief that Pakistan could “eliminate India” with nuclear weapons is obviously delusional, and an analysis by an Indian journalist says that India has called “Pakistan’s nuclear bluff”:

Pakistan defense minister Mohammad Khwaja’s threat to use “tactical” nuclear weapons is not just a case of political hyperbole. The notion that nuclear weapons deter retaliation by the Indian Army while allowing Pakistan to send jihadis to carry out terror strikes in India is a deeply held view in the Pakistani establishment…

The Pakistan army’s “green books” that detail operational philosophies, conventional and jihadi outfits, like Lashkar and Jaish, and nuclear weapons are a seamless triad. “The Pakistan army is perceived to be the center of gravity…of Pakistan which is backed by irregular forces (like mujahideen) and is reinforced by nuclear weapons,” the 2008 edition says.

In crossing the LoC and admitting it, India has taken on this nuclear blackmail, well aware that doing so carries the risk of escalation. “We are ready. The decision to go ahead with military action was taken with the full awareness that overt action can come at a cost,” said a senior minister in the know of the operation.

By taunting Pakistan and call its bluff, India is guaranteeing that there will be retaliation.

From the point of view of Generational Dynamics, what we’re witnessing here is a series of “regeneracy events” that lead to full-scale warfare. The word “regeneracy” refers to the fact that civic unity is regenerated in each country for the first time since the end of the previous generational crisis war. Each new attack crosses a previously uncrossed red line, and results in retaliation which does the same. These tit-for-tat attacks continue to escalate. In this case, it would mean a major war between two nuclear powers. The use of nuclear weapons by either Pakistan or India would certain being other countries into the war, if it has not happened already. This is one of the scenarios that could lead to a new world war in the next year or two. Indian Express and International Business Times and AFP and Pakistan Today

China threatens Japan, South Korea and U.S. all in one day

China has demanded that the deployment be cancelled, and on Thursday announced that it “means what it says” when it says it will consider countermeasures against the planned U.S. deployment.

Meanwhile, Japan is strengthening its ties with Vietnam and the Philippines in common defense against China’s use of military force in the South China Sea and East China Sea. In particular, China is using military force to illegally annex regions in the South China Sea belonging to other countries, according to a judgment by United Nations Permanent Court of Arbitration (PCA) in the Hague.

Japan has announced that it will step up activity in the South China Sea through joint training patrols with the United States.

We must solemnly tell Japan this is a miscalculation. If Japan wants to have joint patrols or drills in waters under Chinese jurisdiction this really is playing with fire. China’s military will not sit idly by.