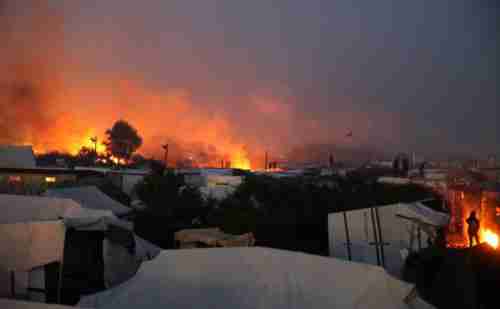 Calais ‘Jungle’ camp goes up in flames on Tuesday (AFP)

France has declared “Mission Accomplished!” after demolishing “The Jungle,” the refugee camp in Calais, and bussing some 4,000 migrants to 280 reception centers across the country after being separated into different categories – single men, families, vulnerable people and unaccompanied minors.

According to Fabienne Buccio, a local official, “There are no more migrants in the camp. Our mission has been fulfilled.”

However, not every tent or shanty was actually “demolished.” A lot of them were burnt to the ground by the refugees themselves, apparently as a way of saying “goodbye.”

And a more serious reason why the mission has not really been accomplished is that there were 7,000 to 10,000 refugees in the camp. That means that several thousand refugees have fled from the camp, and are hiding out in order to stay near Calais. Many have simply gone to another refugee camp in nearby Dunkirk. On top of that, new refugees are arriving every day.

The people in the camp are escaping war or poverty mostly from Afghanistan, Sudan, Eritrea and Syria. The reason that migrants have come to Calais in the first place is because it’s near the Eurotunnel that connects France to Britain underneath the English Channel. Britain is a favorite destination because of liberal welfare and medical services policies, and because they prefer an English-speaking country. So having been desperate enough to have risked their lives for months to reach Calais, they are going to resist being bussed far away to another part of France. The Local (France) and Express (London) and France 24

Many children were unaccompanied because they had been sent from Syria or Afghanistan to try to reach family members in the UK, leading some activists to claim that Britain is responsible for these children. According to Robert Innes, the Anglican Bishop of Gibraltar in Europe: “They are gravely at risk. At a time when the UK is rightly spending millions on investigating historic child abuse, it is striking that there is a massive influx of traumatized children to Europe at risk of current abuse, and for whom we are not yet doing enough.” Church Times and CNN