All Christian militias have come together to fight as one force in an effort to recapture their historical homeland in northern Iraq from the Islamic State (ISIS/ISIL), Breitbart News has learned.

The Nineveh Plains, a region in northern Iraq’s Nineveh province outside Mosul, is the historical homeland of the region’s Christian community, which is one of the oldest in the world.

Political and religious leaders representing the Chaldean Syriac Assyrian community in Iraq agreed on unifying their respective organizations, publishing a document announcing that all the different Christian groups have joined forces.

“Everyone decided that unity is a must in order to keep the villages of the Nineveh Plains safe. Everyone agrees to unify the military forces,” states the announcement signed by the political leaders. “In the future, there will be more meetings held with the political parties to discuss this further.”

“The decision was made to create a committee that consists of the political parties with the support of the religious leaders that will meet together and act as one in order to gain representation on the international state to ask for urgent rebuilding of the Nineveh Plains,” adds the document.

Breitbart News spoke to one of the political leaders who signed the agreement: Emmanuel Khoshaba Youkhanna, a leader of the Assyrian Patriotic Party and commander of the Assyrian Christian militia known as Dwekh Nawsha (“self-sacrifice”).

Referring to the decision to come together, Youkhana told Breitbart News, “This is the first step to unify all our forces under one leadership.”

He explained that the unified Christian force is seeking official recognition from the U.S.-backed, Shiite-led Iraqi government in Baghdad, emphasizing, “We don’t want to be an outlaw militia.”

“We lost our territory and people because of the mistakes of others — both the Iraqi government and the [autonomous] Kurdistan Regional Government [KRG] in northern Iraq when they pulled out of Mosul and the Nineveh Plain,” also said Youkhana.

“Now, we want our Christian force to secure and seize that area and join the efforts of all the people from that area,” he continued.

Iraq’s Nineveh province was once home to the largest concentration of Christians and other ethno-religious minorities in Iraq. Mosul, which is also located in the Nineveh province, was once considered the heartland of the Iraqi Christian community.

The Christian militias have come together as a U.S.-backed force of Iraqi Security Forces, Kurdish Peshmerga troops, Sunni tribesmen, and Iran-backed Shiite militiamen are fighting to retake Mosul from ISIS.

“We want our forces to maintain security in the Nineveh Plain,” Youkhanna told Breitbart News.  “We’ve talked about this with the United Nations, the Iraqi government, and the KRG. We demand a safe haven for our people.”

“We hope that after this unity the United States will give us the assistance that they’ve given the other people of Iraq,” he added. “We welcome any help that can be provided to our Assyrian Christian people so that we can stay in our homeland.”

The Christians and other ethno-religious minority groups in Iraq have been victims of genocide at the hands of ISIS.

Some Christian militias have already been participating in the U.S.-backed Mosul offensive.

Besides Youkhana, the other Christian political leaders who agreed to form the unified militia force include:

Below, the full text of their agreement: 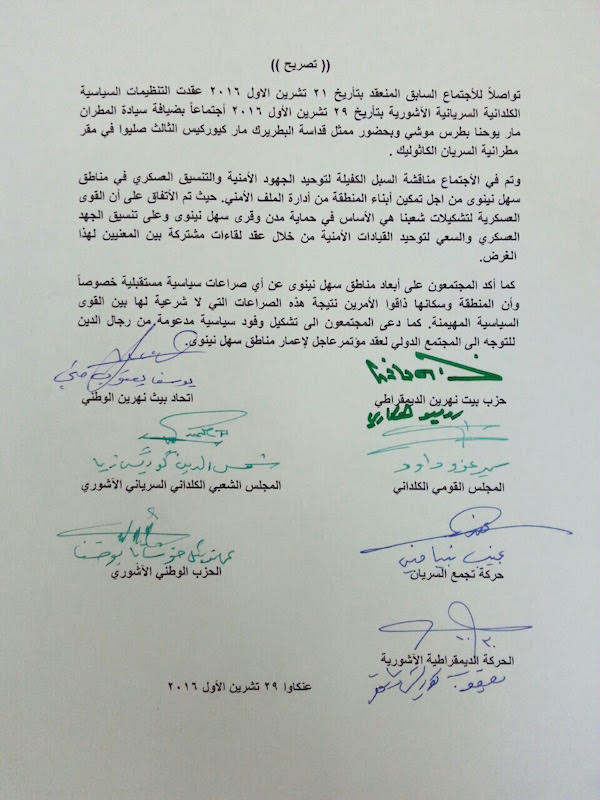