It was fun to take a look around the world on the eve of the 2016 election, and get an idea of how media in other countries was covering the event. How are they dealing with the outcome?

La Nación of Buenos Aires said the entire world was on “tenterhooks” waiting for the last votes to be counted, and Hillary Clinton to offer her formal concession, while a “thunderous collapse in world markets” accompanied the “surprise electoral turn.” As it turned out, the world swiftly came down off its tenterhooks, and the markets were just fine by the end of the day.

The Argentinian paper’s caricatures for Trump and Clinton next to the final vote counts were true works of art: 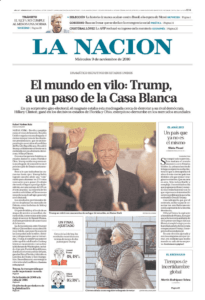 The Brisbane Courier-Mail predicted financial apocalypse for Australia if Trump’s victory held up: 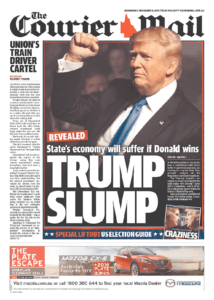 Spain’s El Mundo was not happy about the United States entering “the era of populism,” crediting Trump’s victory to “the indignation of white, rural America”: 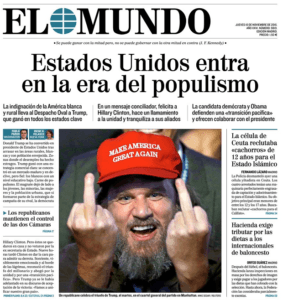 Austria’s Neue Vorarlberger Tageszeitung decided to check on us and see if we were all right after Tuesday night’s excitement, and warned the new U.S. head of state that he would face “enormous challenges” because “the country is deeply divided.” 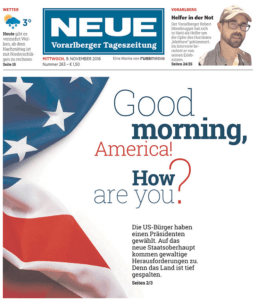 Another Austrian paper, Voralberger Nachrichten, decided Hillary Clinton was the star of the show, even though she lost. (Dimly visible out-of-focus in the background: the guy who won): 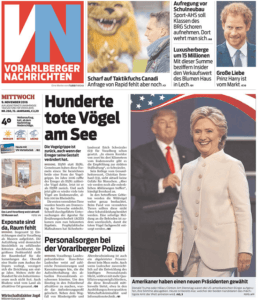 For Trouw of Amsterdam, on the other hand, the cover story was all about Trump and his “revolution”: 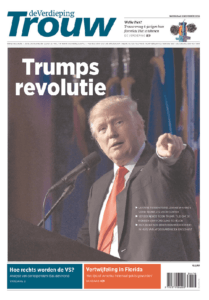 Het Parool of the Netherlands trumped Trouw‘s appreciation of Trump with a cover that declared him “the hero of forgotten America”: Brazil’s Journal do Comemrcio said a lot with a single gigantic punctuation mark. The accompanying cover text asserts that Trump’s “attitudes” are “often described as crazy or vain”: 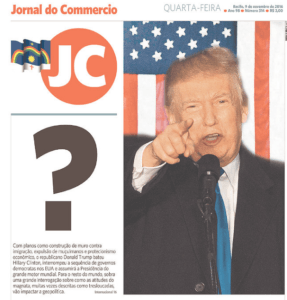 Belgium’s De Morgen called for Americans to unite now that the election was over, with a cartoon that made it look like Trump and Clinton ran afoul of the creature from John Carpenter’s The Thing: 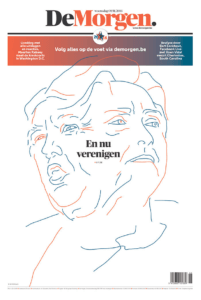 Italy’s La Stampa used two of the stranger photos of Clinton and Trump to commemorate “the day that changed America.” 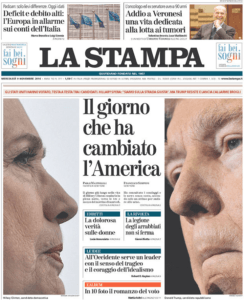 Barcelona’s Ara declared Trump had set off an “earthquake,” and somehow found a single crowd shot that captured the full spectrum of responses to his victory: 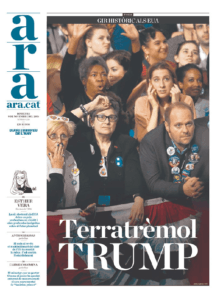 Zurich’s Tages-Anzeiger said America must “digest” the results of the election now, and envisioned Uncle Sam complaining about a stomach ache: 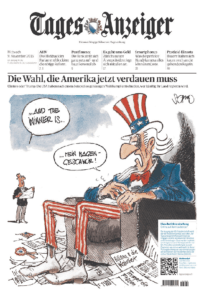 Taiwan’s United Evening News saw the election as a much happier event: 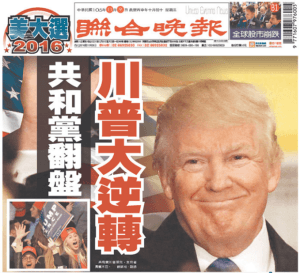 The Arab News of Saudi Arabia portrayed Trump’s election as the “end of an era” that stretched from September 11th through the Obama years, and spent most of the front page blowing a raspberry at Barack Obama’s Middle East policies: 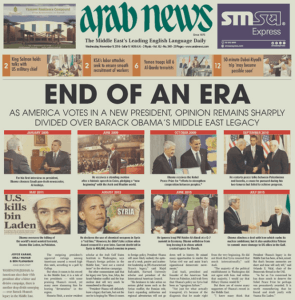