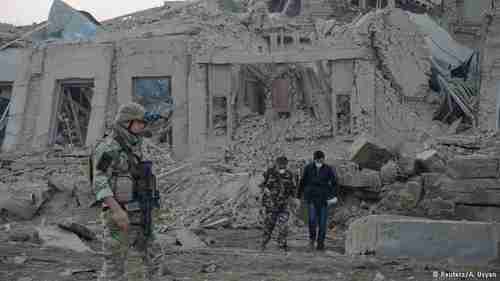 A suicide car bomber rammed Germany’s consulate in Mazar-i-Sharif in northern Afghanistan on Friday, killing six civilians and wounding more than 120. The ensuing gun battle continued for around five hours. All German and Afghan employees of the consulate were unharmed. The Taliban claimed responsibility.

Germany’s Foreign Minister Frank-Walter Steinmeier said, “The attackers were fought off by the consulate’s security personnel, Afghan security forces, and German, Georgian, Belgian and Latvian special forces stationed in the city as part of the Resolute Support mission.” Mazar-i-Sharif is the provincial capital and one of the richest and most important cities in Afghanistan. Deutsche-Welle and AP

A man wearing a suicide vest killed two U.S. service members and two U.S. contractors early Saturday inside Bagram military base, the largest NATO military base in Afghanistan. A Taliban spokesman claimed responsibility for the attack, and said it had been planned for four months.

Bagram Airfield features several layers of security, including retinal scans. The attacker was one of the Afghan laborers working on the base. NBC News and Arab Times (Kuwait)

At least 52 people were killed and over 100 wounded in a suicide bombing by a 14-year-old boy at a Sufi shrine about 760 km south of Quetta and 100 km north of Karachi in Pakistan’s southwestern province Balochistan.

The bombing occurred just before sunset during a daily Sufi ritual trance-like dance or “dhamaal.” Many people come each day just for the dance, including non-Muslims. At least 500 people had gathered on Saturday for the dance and for a picnic.

The so-called Islamic State (IS or ISIS or ISIL or Daesh) is claiming credit for the attack, giving rise to the speculation that the boy’s parents have joined an ISIS-linked terror group in Pakistan. However, ISIS has the practice of claiming credit for terror attacks it has had nothing to do with, and that may be the case this time.

An attack occurred three weeks ago at a police training facility in Quetta, killing 61 people, mostly fresh police recruits. That attack was blamed on the Al Alami offshoot of Lashkar-e-Jhangvi (LeJ), a terror group that has vowed to exterminate all Shias in Pakistan, and has carried out numerous terrorist actions targeting Shias and Sufis. LeJ is also thought to have links to ISIS, and it’s possible that Saturday’s attack was linked to LeJ.

Last month’s Quetta attack sent shock waves through Pakistan’s society, as they continue their internal debates between “good and bad Taliban,” and this new attack will intensify that debate. Express Tribune (Pakistan) and Press Trust of India (PTI) and Smithsonian Magazine on Sufi dance