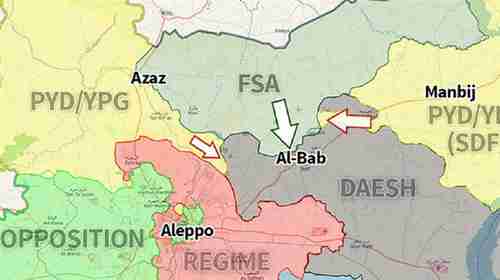 In August, Turkey began “Operation Euphrates Shield” and became the first Nato member to invade Syria since the beginning of the war that began in 2011. Turkey has stated that there are two objectives: to fight the so-called Islamic State of Iraq and Syria (IS or ISIS or ISIL or Daesh) and force them to move south, and to fight Kurdish People’s Protection Units (YPG), and force them to move back east across the Euphrates River.

As FSA militias move south towards al-Bab, it seems that a major confrontation is developing. YPG forces are also moving towards al-Bab to capture al-Bab from ISIS.

If Turkey-backed FSA forces take control of al-Bab, then the FSA forces will be in a position to help break the siege in eastern Aleppo, a city that the Syrian regime of Bashar al-Assad want destroy, killing over 250,000 people, mostly innocent women and children. Al-Assad has received worldwide condemnation for regime actions in Aleppo as war crimes and crimes against humanity, so al-Assad does not want to be stopped by the Free Syrian Army.

At the same time, FSA forces plan to move east and recapture Manbij from the Kurds.

Operation Euphrates Shield was necessary, especially for TSK-backed Free Syrian Army (FSA) fighters, to prevent the establishment of a corridor [by terrorist PYD] near Kobani and the Afrin region. However, the operation must expand further south toward Manbij. Foremost, the operation must continue toward al-Bab before it moves toward Manbij, in order to prevent the corridor from being established to the south.

Operation Euphrates Shield appears to have slowed down substantially near the al-Bab region. Retired military officer and security specialist Abdullah Agar said that it’s supposed to slow down because it’s proceeding with caution:

It was already known that the operation would become more difficult as it deepened and moved farther south. Al-Bab is the major obstacle that we are facing today. … [The PYD and its armed wing the People’s Protection Units] YPG, the PKK, Syria’s Assad regime as well as the Shiite militias have diverging plans regarding al-Bab. While the YPG-PKK hastens efforts to connect the Afrin region with the area west of the Euphrates, it also tries to seize regions that were cleared of Daesh. The[Syrian] regime is trying to further enhance its influence over Aleppo and surrounding region at the same time.

Air strikes killed four Turkish soldiers in the region around al-Bab on Thursday.

Thursday was November 24, the one-year anniversary of the day when Turkey’s air force shot down a Russian jet along the Syria-Turkey border. This caused a major break in relations between the two countries, but there’s been an uneasy reconciliation since Turkey’s president Recep Tayyip Erdogan apologized.

Nonetheless, Erdogan suspected that Russia’s president Vladimir Putin had ordered Thursday’s airstrike in retaliation for last year’s shootdown. Russia reassured Turkey that the airstrike was not carried out by them, and later notified Turkish officials that the attack was conducted by a Syrian air force Albatross plane.

The fact that a Syrian regime warplane attacked Turkish forces near al-Bab indicates the potential explosiveness of the situation. Any repeat of such an airstrike is almost certain to provoke Turkish retaliation on Syrian targets. Turkey has already threatened to retaliate for Thursday’s strike, though the nature of that retaliation has not been specified.

Erdogan and Putin had a phone discussion over the incident. Little is known about what was said, except the usual vacuous statements issued by both sides. Erdogan reportedly told Putin that Turkey respected Syria’s territorial integrity and that its military incursion showed its determination to fight militant groups. Putin reportedly said that the discussion on Syria was constructive and that both sides agreed to continue active dialogue to coordinate efforts against international terrorism. Blah, blah, blah. Undoubtedly, Turkey’s invasion of Syria presents problems for Russia, who is the main sponsor of Bashar al-Assad.

According to Russian analyst Vladimir Sotnikov:

What happened in northern Syria is highly dangerous, potentially for Russia too. President Erdogan is a violent and ambitious politician, sometimes acting on his emotions. If he decides that the strike on Turkish forces in Syria was not a mistake or a chance event, but a deliberate action by the Syrian command, he might take this as a challenge to himself. Then, as precedence dictates, it will be necessary to respond.

Such a response [in case Erdogan decides to use air forces] threatens to drag Turkey into war with Russia over who controls Syrian airspace.

Some Russian analysts are speculating that Bashar al-Assad ordered the airstrike on Turkish forces in order to provoke a war between Russia and Turkey. Hurriyet (Ankara) and Daily Sabah (Ankara) and Hurriyet and Kommersant (Moscow)