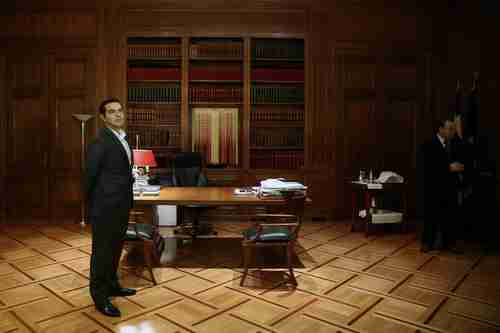 A new disagreement between Greece and Greece’s three creditor institutions – the International Monetary Fund (IMF), the European Commission (EC), the European Central Bank (ECB), formerly known as the “troika” – is threatening to catapult Greece into a major new financial crisis by Christmas.

This has been going on for years, and as we’ve written many times in the past, there is no solution to Greece’s financial crisis. It is not that no one has been clever enough to figure out a solution. It is that no solution exists. Greece’s government accumulated an enormous amount of debt in the 2000s decade by repeatedly lying about its income and expenses, and ever since the day of reckoning, it is been clear that Greece will never be able to repay its debts.

If Greece declares bankruptcy, leaves the euro currency, and returns to its original drachma currency, it will be a financial disaster for the Greek people. And so, the three institutions have been kicking the can down the road by repeatedly providing money, and by requiring Greece to make various cuts in government programs, in order to give the appearance of forcing some discipline on the government, even though they know it will make little difference. Officials in Greece make arguments that boil down to the following: We all know that Greece is going to go deeper and deeper into debt anyway, so we might as well just keep spending more money on social programs.

On December 5, the three institutions reached an agreement to a bailout loan with enough money to allow Greece to meet its next debt repayment and avoid having to declare bankruptcy. At the same time, they insisted that Greece’s government adopt more reforms, thus playing their part in the game. But Greece’s prime minister Alexis Tsipras didn’t play the game. He announced that instead of reforms, he would grant a pre-Christmas bonus to poor pensioners. In addition, he will keep in place a discount in valued-added tax, to eastern Aegean islands whose tourist industries have suffered because of the crisis of refugees crossing from Turkey to Greece. He had previously promised to scrap that discount as one of his commitments in return for the latest bailout. Apparently he believes that he can get away with this because of Greece’s central role in the refugee crisis.

This sudden announcement has caused the December 5 agreement to fall apart. The Eurogroup of eurozone finance ministers issued a statement saying that Tsipras’s announcement appeared “to not be in line with our agreements.” The bailout loan has been put on hold, and the institutions will now put into place a full investigation of Greece’s fiscal plans, before it will be reinstated. Kathimerini and Bloomberg

IMF says that Greece’s budget must be ‘more growth-friendly’

Left: Greece’s tax collections have fallen sharply; right: More than 50% of Greece’s household are exempt from paying any income tax at all (IMF)

The International Monetary Fund (IMF) is being blamed by many people for demanding more austerity from Greece and threatening Greek people with starvation.

The IMF is responding that it is not demanding any additional austerity at all, but instead is asking that the public sector be restructured to make it “more growth-friendly.” The IMF makes the following points:

The IMF recommends that the authorities should further reduce current pensions while increasing spending on a modern and well-targeted welfare system to protect those that are most in need. More should be spent on other essential public services and key public investments too. IMF and IMF (PDF) and Newsweek