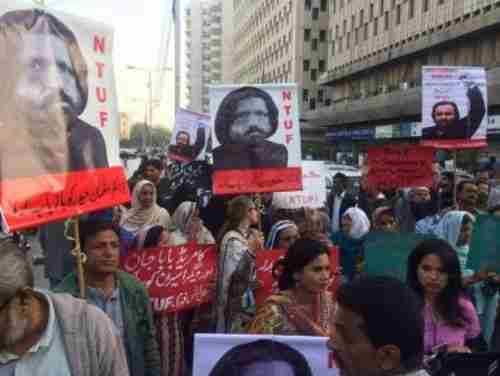 In separate incidents, four secular anti-military activists in Pakistan have disappeared within the last few days, apparently kidnapped by the army. All of them actively post on social media, to the discomfort of the army.

Another man, Ahmed Raza Naseer, was taken from his family’s shop on Saturday. Naseer suffers from polio.

The disappearance on Saturday of Salman Haider, a lecturer at Fatima Jinnah Women University, was brought all four abductions to national attention. Haider frequently wrote about how troubled Pakistan’s society it, with government security forces targeting Shias and ethnic Hazaras in Balochistan. Haider also wrote about other people whom the army the abducted, and that perhaps angered the army the most.

The Human Rights Commission of Pakistan (HRCP) has called for country-wide protests against the abductions:

HRCP is greatly alarmed by Waqas Goraya and Asim Saeed disappearing on January 4, Salman Haider on Friday and Ahmed Raza Naseer on Saturday. All four are known for airing their views, sometime critical of authority, extremism and intolerance, on social media.

Pakistan has never been a particularly safe country for rights activists. Many have been killed, injured, abducted and threatened for their work… The events of the last week demonstrate that the dangers already extend to digital spaces. We cannot be sure if the four cases are connected but expect that would be worth looking into as well.

Threats and violence have never deterred Pakistan’s activists from speaking their mind and flagging issues that conscious citizens must raise in a civilized society. We know that the events of the last few days, will not change that. At the same time, however, HRCP also implores the government to wake up to its obligation to provide a safe environment for human rights defenders and activists.

The abductions seem to be working. In the last two days, several activists have closed down their online accounts.

Last year, Haider wrote a poem about the abductions. The following is a translated excerpt from the Urdu:

Now friends of my friends are going missing,
Then it will be my friends, and then,
It will be my file [of me missing] that
my father will take to the courts.

Pakistan’s army accused of dumping over 1,000 bodies in Balochistan

According to Pakistan’s Human Rights ministry, over 1000 dead bodies of suspected armed separatists and political activists have been found in Balochistan over the past six years.

The Voice for Baloch Missing Persons (VBMP) says it has recorded 1,200 cases of dumped bodies and there are many more it has not been able to document. VBMP says that most of the bodies were activists who, one day, were picked up by authorities and were never seen again.

However, Pakistan’s government claims that they had nothing to do with the killings. According to one provincial official: “There are several explanations. Sometimes insurgents are killed in a gunfight with law enforcement agencies but their bodies are found later. Militant groups also fight among each other and don’t bury their dead fighters. Then there are tribal feuds, organized crime and drug mafia.” BBC and International Business Times (London) and India Times