David Eubank (far right, above) is founder and director of the Free Burma Rangers (FBR), a Christian humanitarian association that distributes relief in Burma (Myanmar), Syrian and Iraqi Kurdistan, and Sudan. He and wife Karen, along with their children, recently completed a mission in Mosul, Iraq. The following are photos and anecdotes written by Eubank from the liberated territories in Mosul, a city still mostly occupied by the Islamic State terrorist group.

MOSUL, Iraq – We have been providing relief in the war zones of Burma for over 20 years, and two years ago were asked to come help in Kurdistan and Syria. We brought ethnic people from Burma to help. In the midst of the continuing oppression and uncertainty in their country, Rangers from Burma felt the call to go help people under attack in Kurdistan, Syria, Iraq, Sudan and other places in the world.

We see the power of God in this and, as in Burma, we go compelled by His love to give help, hope and love in Jesus’ name. In 2015 and 2016, we went to Kurdistan and Syria numerous times, providing medical training on the front lines, doing children’s programs in the IDP camps and getting the news out. We stand against oppressors, be they in Burma, Kurdistan, Syria, Iraq or Sudan, and we are also praying for the oppressors—and asking God for love for them. No one is beyond redemption: Fighting evil and grounding our actions in love are practical ways towards defeating evil and uniting for a new way forward. 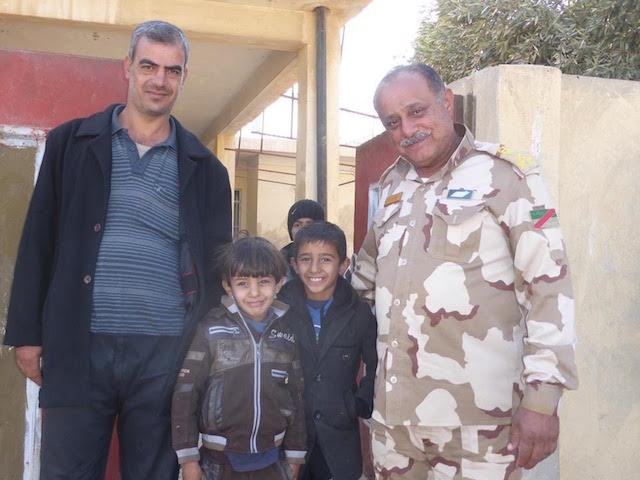 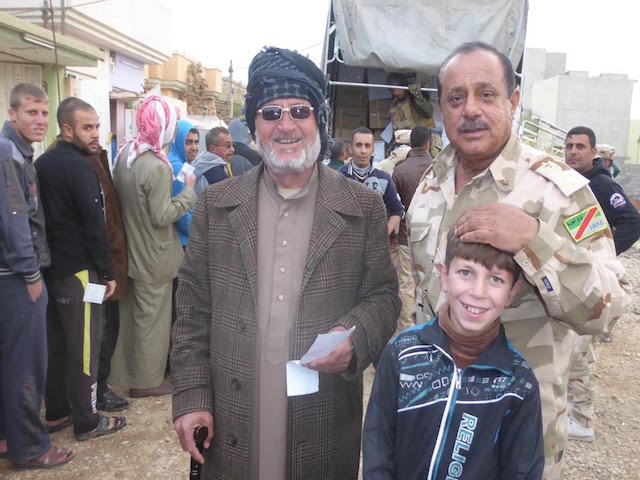 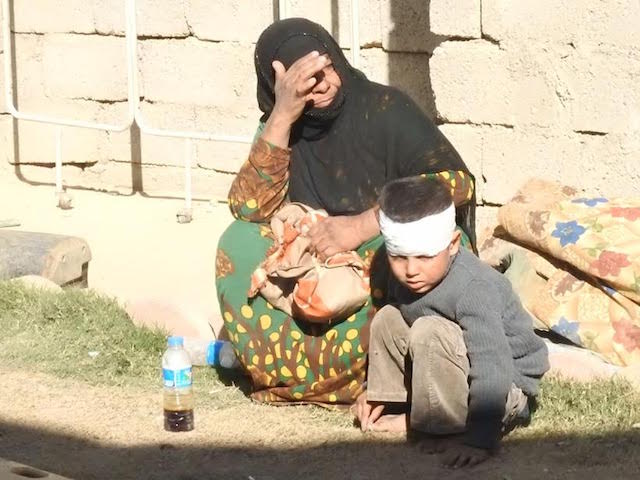 While we were working with the Kurds, and before we were invited to help bring food for people in Mosul, we were told, “You Free Burma Rangers may be able to work in Kurdistan and pray with people there, but in Mosul its completely different. There is no place for Jesus stuff in Mosul because God is not there. It is a violent, extremest place, it is not your place.”

We believe He led us to Mosul and our prayer is to be His ambassadors. In spite of our own weaknesses and sins we saw Jesus there and saw the hunger of people for Him. I also learned new things there; personally how thin my patience and love are, and how brave and caring the Iraqi Army is. 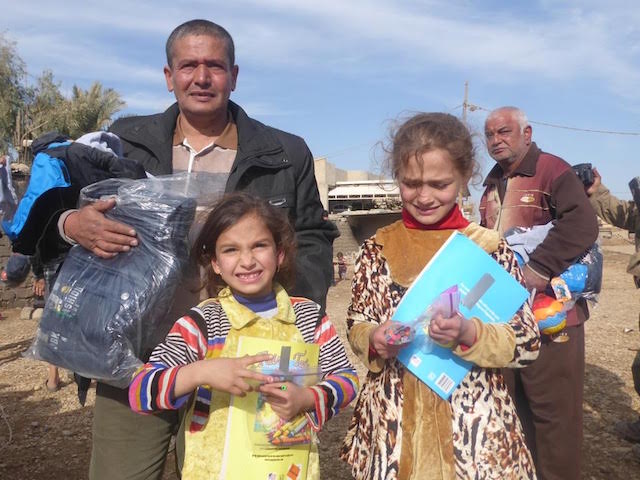 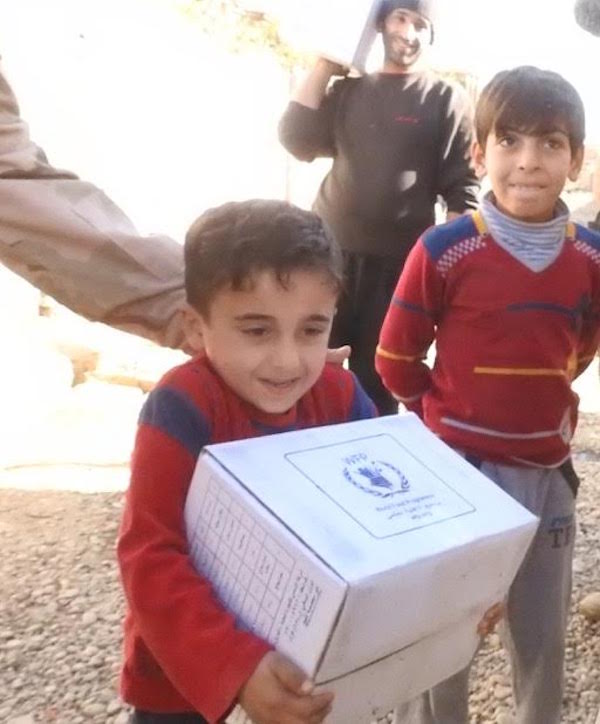 Now on the campaign against ISIS, the Iraqi Army has a foothold in Eastern and Southeastern Mosul. It is a city of over one million that stretches from the plains of Ninevah to the east across the Tigris River to the low hills in the west. The eastern side of the city is relatively modern, but densely packed with two to three story concrete buildings. Across the Tigris to the west is the old city of even more densely packed buildings of concrete and mud within a twisting labyrinth of streets and alleys.

This is the first major city that ISIS took during their conquest of parts of Iraq and Syria in 2014. The people are predominately Sunni and many support ISIS in the face of the injustice they felt from the Shia in Iraq. Into the corner of southeast Mosul, our team including our ethnic medics and cameramen from Burma, as well as two Yazidis and a Kurd. The group was taking in baby formula, food and medicine and distributing it in areas recently liberated from ISIS. 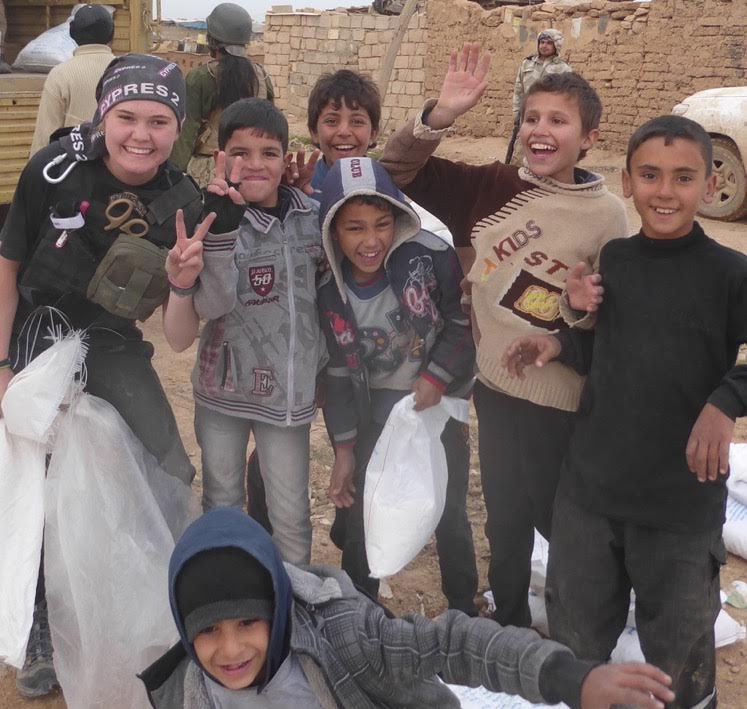 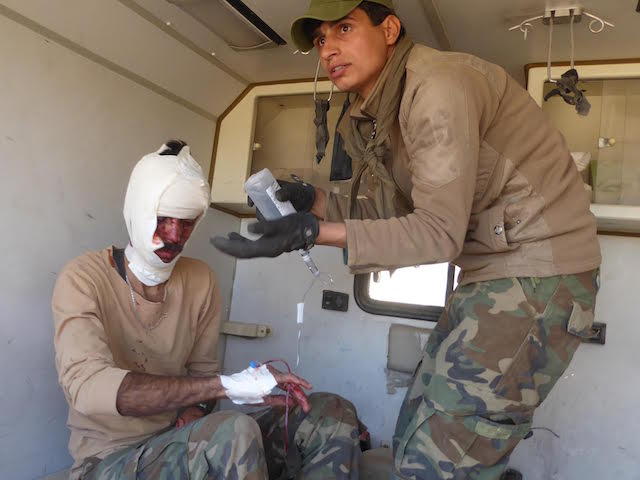 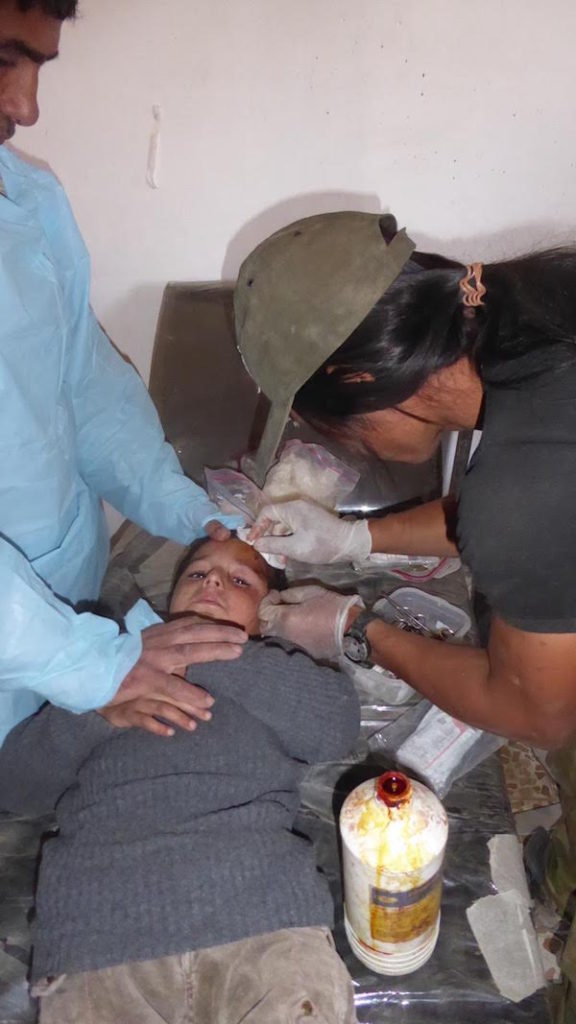 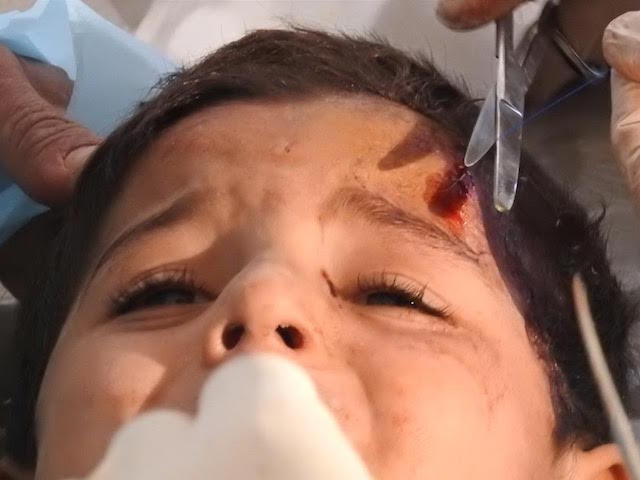 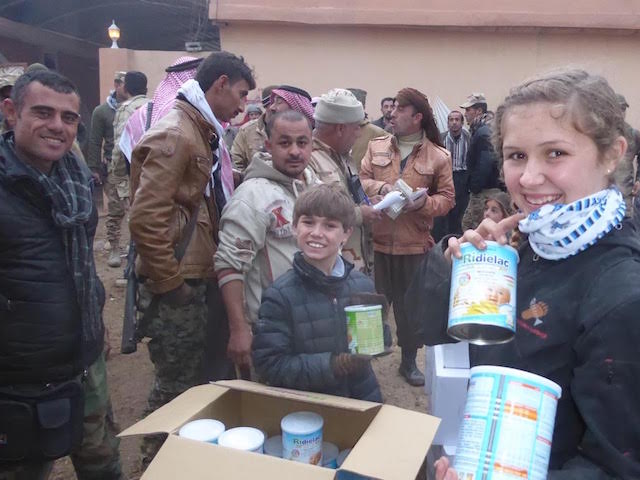 Even though ISIS has been pushed out of these neighborhoods, they still hold most of Mosul and are only one building or one block away from the Iraqi forces. As we began to hand out the food, ISIS attacked us with rifles, machine guns and mortars. The Iraqi Army held them off and, as bullets flew over our heads and smacked into walls, we continued to pray with people and give out food. Families would dash from their houses, get the food and medical care they needed, and then run back inside.

Many have decided to stay in this war zone because they are afraid of what will happen to them if they flee to a refugee camp. They are also afraid they will lose their homes and possessions if they leave.

During ISIS attacks, Iraqi soldiers shielded the civilians and exposed themselves to direct fire as they attempted to stop the ISIS attack. ISIS launches their attacks from a network of tunnels, rat holes, suicide vehicles and IED’s. They continue to attack day and night with heavily armored trucks full of explosives, which they detonate into Iraqi positions and into civilians. ISIS soldiers attack on foot through doors, windows and alleyways, pouring down fire on the Iraqi soldiers, those distributing food and the civilians receiving it. In seven of the ten distributions we have done so far, we came under direct attack from ISIS who killed and wounded civilians.

Yet people kept coming for food because they needed to eat and there was no other way of getting it.

It is my estimation that about 10% of the population of Mosul give direct support to ISIS, 20% to 30% are sympathetic towards ISIS, and the remaining 50% to 60% don’t like ISIS but do not trust the government in Baghdad. All we met were grateful for our food and help but we know that some of them still support ISIS and that many of them still don’t trust us. 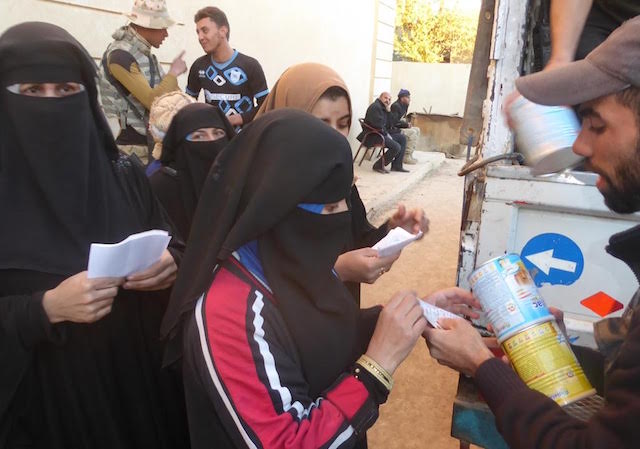 On some occasions after receiving their rations, the small group of civilians who support ISIS would call them from their phones so ISIS would know where we were and attack us. One time two men placed a land mine on the road we used in order to kill us on our way out after a distribution. The Iraqi Army caught them in the act and stopped the attack. We knew this going in, but prayed and felt this was the door God wanted us to go through to share his love in their time of need and to develop new relationships.

Towards the end of one distribution, while we were under fire, I gave a Jesus film in Arabic to one of the men. I said, “This is a film about my leader but, if you don’t like it, you can throw it away.” He looked at the cover and said, “Jesus. We need Jesus because Jesus brings love, forgiveness and truth; we need him. Thank you for loving us and sharing about Jesus.” I prayed with this man that he would survive the war and that freedom and peace would come to his land. He told us his name was Haman and he would help us any way he could. His face was radiant and warm as he said thank you and goodbye. 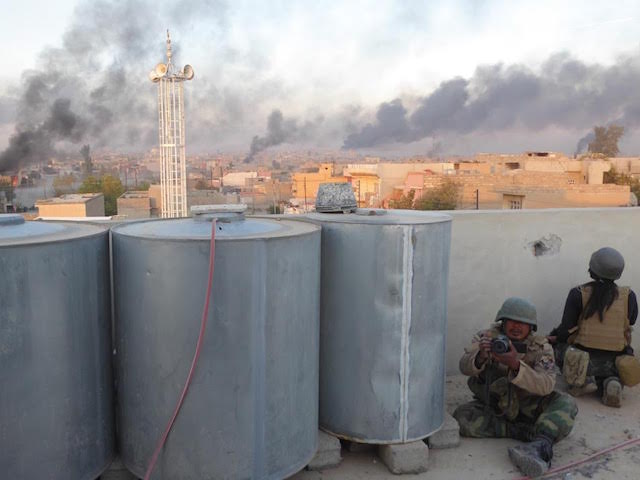 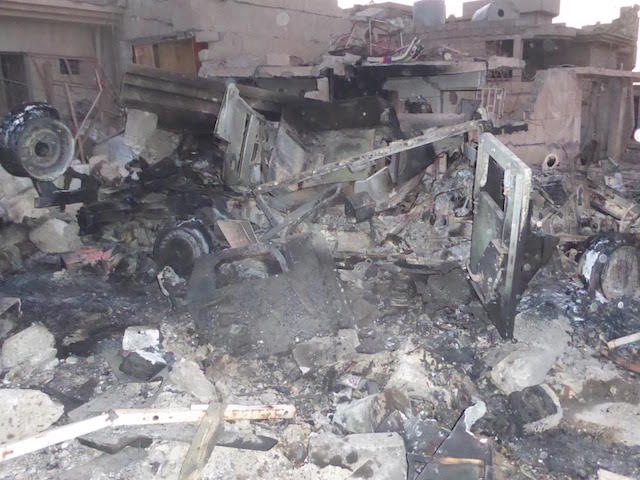 While the Iraqi Army is leading the fight against ISIS, an assortment of Shia militias have also taken an important role. Some of the militia are supported by Iran and are anti-American. On our way out of Mosul one day, we ran into a Shia militia checkpoint. They had their own assortment of red, black, and green flags and looked at me with suspicion when I approached them.

“Why are you coming this way?” they asked, as we were on a route we usually did not take out of Mosul. I told them that two weeks earlier I had been on a rescue of Iraqi soldiers who were moving relief supplies and were ambushed by ISIS at that very spot. Their vehicle had been destroyed by an RPG and they’d all been shot, but escaped into the ditch where they fought back and called for help as ISIS approached. We got there in time to hold off the ISIS attack and rescue them. I said I wanted to see what that place looked like in daylight. ISIS had been driven out of the area a week earlier so now I had an opportunity to see it.

The Shia militia leader said, “You didn’t know it, but the night you were trying to rescue the soldiers we were on the other side of ISIS trying to help you and were part of the force that pushed ISIS out.” We talked together and I prayed with them. As I went back to my truck I felt God nudge me to give them a Jesus film. I hesitated because I didn’t want them to think I was some kind of fanatic, so I prayed, “Really, God, I don’t want to be afraid of man, but I want to be respectful and loving.” I then felt assurance to give them the video. I walked back to the militia and said, “I want to give you a film about my leader, Jesus. If you don’t like it you can throw it away.” The soldier said, “No, no. I love Jesus.” Then he kissed the dvd and then placed it on his eyes and said, “He is my eyes,” and then on his head and said, “He is my head. Thank you for this!” 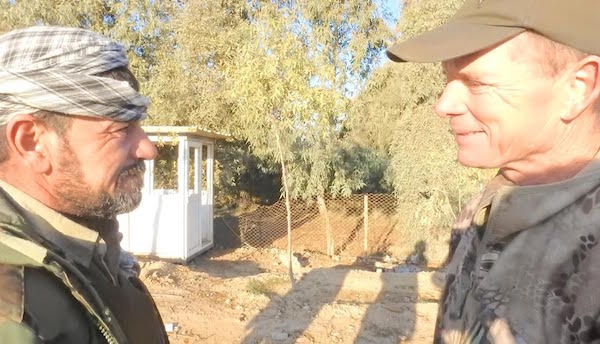 My wife Karen and the kids joined us part way through our Mosul mission. The first day there, we did a Good Life Club program for children in a abandoned school in a neighborhood the Iraqi army had secured in southeast Mosul. Our Iraqi soldiers provided security for our program and invited the families of the neighborhood to come.

Karen, Hosannah, Sahale, Suuzanne, Peter, Joseph and Zau Sang (from Burma), Riley, Sky, Wes, Dave D, Dulo (our Kurdish translator), Shaheen and Ezadeen (our two Yazidi translators along), and with some Iraqi soldiers who wanted to help formed our team.

The team taught English songs, gave bracelets symbolizing God’s love, gave Good Life club T-shirts and lastly performed a play about the Good Samaritan. They acted out Jesus’ story about a Jew who was robbed and left for dead, ignored by his own people but then rescued by a Samaritan, an outcast by the Jews. 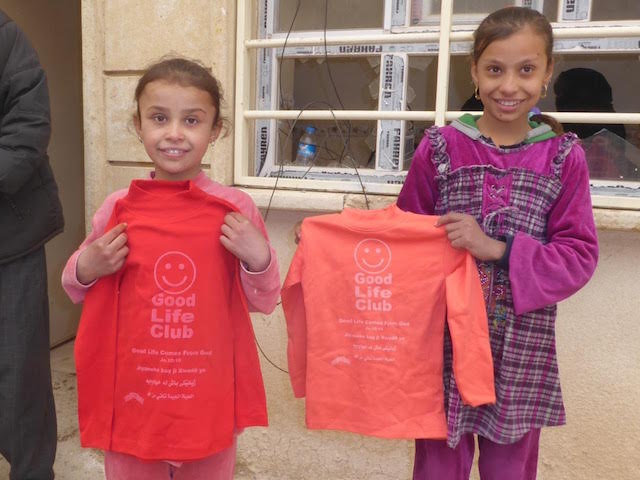 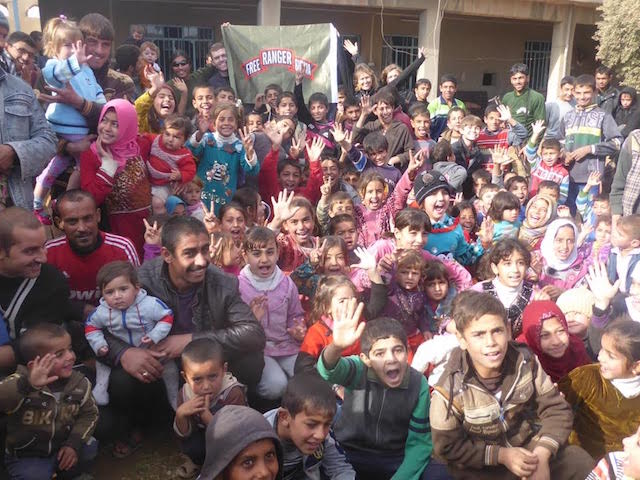 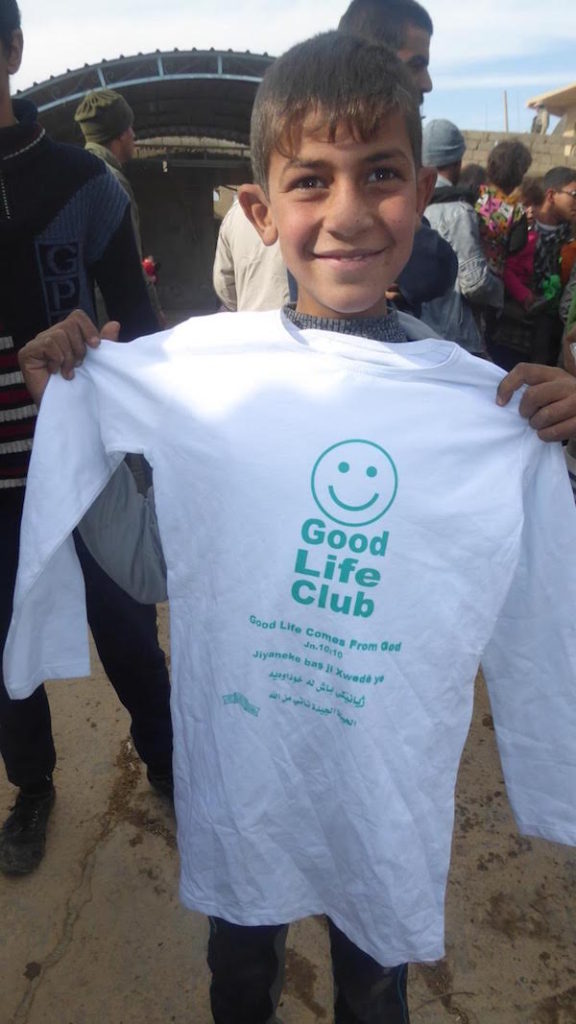 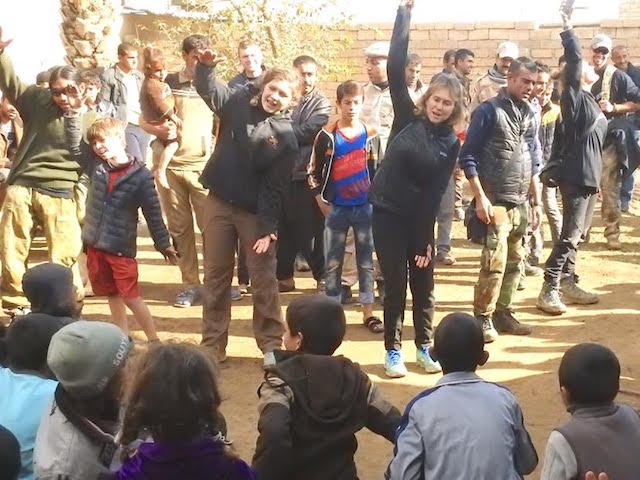 This story is about love, risk, and forgiveness that crosses religious and ethnic lines. During the play ISIS attacked with mortars. RPGs then began an assault on our building with rifles and machine guns. The Iraqi Army asked us to finish the program quickly as booms reverberated through the building and machine gun fire went back an forth.

We ended the program with a prayer and handed out all our shirts. As a man was leaving with his children, he thanked me profusely saying, “That was the most wonderful play because it describes our people. We should be like that Samaritan.” Then, under cover of Iraqi Army fire, we escorted the kids out of the school to a street out of the direct line of bullets so that they could get home. 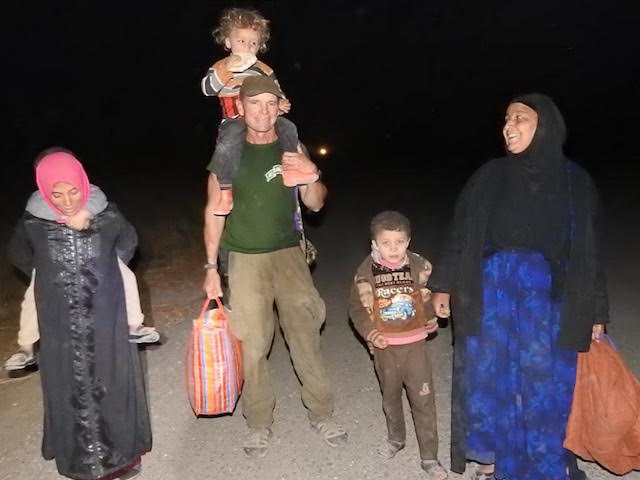 By now ISIS, was getting closer and the soldiers were asking us to leave as they let they could no longer hold the school. We thanked them and one of them said, “Thank you. We love helping the children.” We drove out under fire back to a stronger Iraqi position a mile away and there began to prepare for the next food distribution. 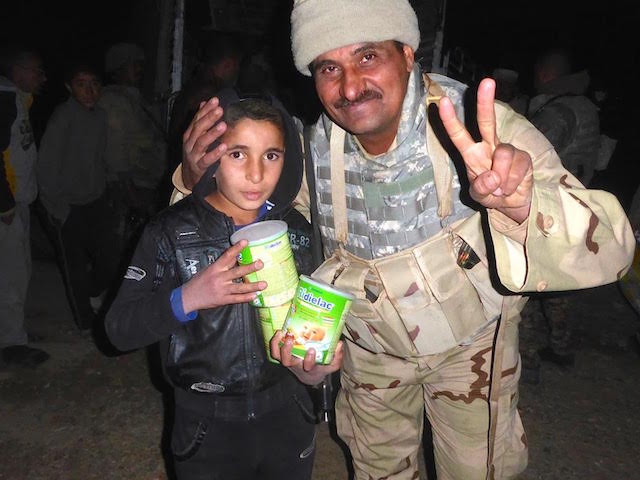 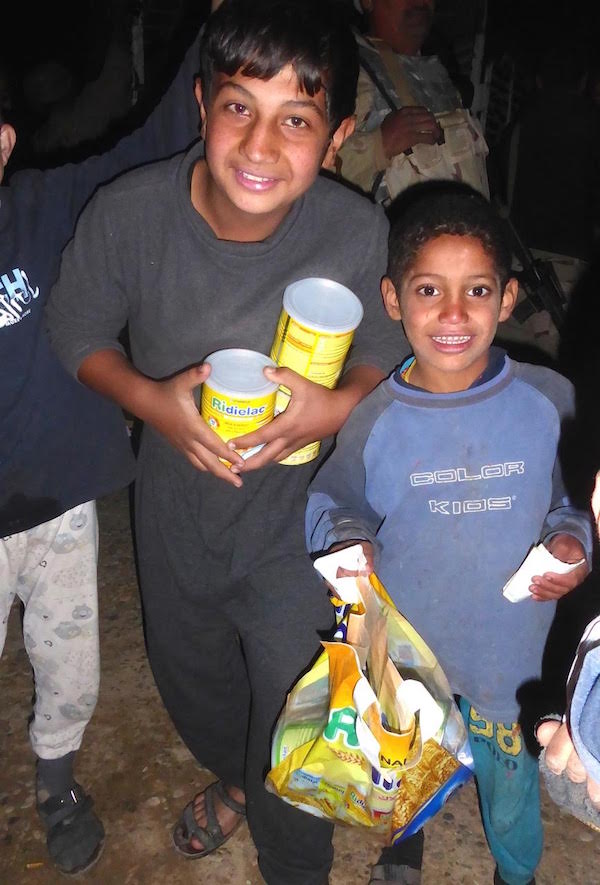 Dear reader, thank you for praying for us. We don’t know what will happen to the people in these stories, or anyone else we meet on our missions, but we hold them in our hearts and love them. Thank you for sending us to Kurdistan and Iraq, and believe the word of God does not return empty.

Read more about the Free Burma Rangers at their website.