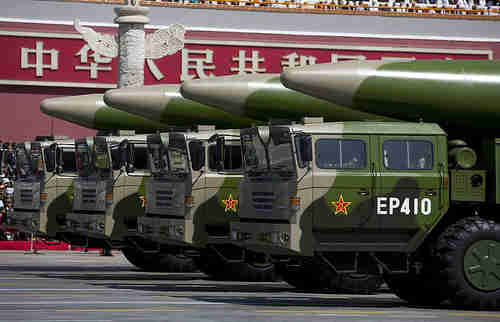 China has deployed a brigade of Dongfeng-41 nuclear ICBM (Intercontinental Ballistic Missile) systems near the Amur River, which separates China from Russia’s Far East. China’s Global Times describes the deployment, and also gives some insight into the what China’s leadership thinks:

Before Trump took power, his team showed a tough stance toward China, and in turn, Beijing will ready itself for pressures imposed by the new US government. It is logical that Beijing attaches particular importance to the Dongfeng-41 as a strategic deterrence tool. With China’s rise, China’s strategic risks are growing. China bears the heavy task of safeguarding national security. Nuclear deterrence is the foundation of China’s national security, which must be consolidated with the rising strategic risks.

The US has the world’s most powerful military strength, including the most advanced and powerful nuclear arsenal. But Trump has called for a nuclear arms build-up many times. Even Washington feels that its naval forces and nuclear strength are lacking, so how can China be content with its current nuclear strength when it is viewed by the US as its biggest potential opponent?

China’s nuclear capability should be so strong that no country would dare launch a military showdown with China under any circumstance, and such that China can strike back against those militarily provoking it. A military clash with the US is the last thing China wants, but China’s nuclear arsenal must be able to deter the US.

The US has not paid enough respect to China’s military. Senior US officials of the Asia-Pacific command frequently show their intention to flex their muscles with arrogance. The Trump team also took a flippant attitude toward China’s core interests after Trump’s election win. Enhancing communication and mutual understanding is not enough. China must procure a level of strategic military strength that will force the US to respect it.

China has had missiles deployed on Russia’s borders for decades, but the deployment of the new DF-41 missiles is causing anxiety in Russia, who fear that the new missiles are meant for Russian targets. Russia’s state media have been full of articles to reassure the public. Russian military expert Konstantin Sivkov says that the missiles could not possibly be targeting Russia:

China has deployed inter-continental ballistic missiles near Russia with the aim to be able to reach targets in the US, Canada and Europe.

This is an inter-continental class missile with an effective range of 10,000 to 12000 kms. The missile’s dead zone is no less than three thousand kms. A large territory of Russia, practically the entire Far East and West Siberia are not within the missile’s reach.

If that were the purpose, the missiles should have been stationed deep inside mainland China or on its southern border.

The last statement is somewhat ironic, since apparently two additional brigades of DF-41 missiles have been deployed, and those brigades are deep inside mainland China, and presumably could strike much of Russia. Even the brigade on Russia’s northeastern border could still strike Moscow, which is in the west.

Each DF-41 ICBM can carry ten independently targetable warheads, with a maximum speed close to 20,000 mph. By deploying an ICBM brigade on the Amur River, the missiles could attack the US by going over the North Pole, and could hit any target in the US, while remaining out of range of the defensive Terminal High Altitude Area Defense (THAAD) system that the US is deploying in South Korea. The nominal purpose of the THAAD system, according to the US, is to protect the US from a North Korean missile launch. However, everyone believes, undoubtedly correctly, that the bigger purpose of the THAAD system is as a first line of defense to a Chinese missile attack on the United States, but the THAAD system could not defend against China’s new missile deployment. Global Times (Beijing) and Sputnik News (Moscow) and Daily Mail (London) and Russia Today and Japan Times

Centuries-old Russia-China border dispute could lead to another war

The Amur River that forms part of the border between China and Russia’s Far East has been the site of wars between the two people for centuries.

The first conflict began in 1628 when the Russians invaded a territory inhabited by a Mongol-related ethnic group. The Russians and the Mongols had already fought many long, bitter wars following the conquests of Genghis Khan in the 1200s, but that wasn’t the motivation for this invasion. The motivation for the 1628 invasion was fur, gold and silver.

The most recent war in this region occurred in the 1960s, and is known as the Damansky Incident. On March 2, 1969, border units of the Soviet Union and China clashed on Damansky Island, gaining control of the island.

Militarily, the Damansky Incident was a small operation, but symbolically and politically it has been extremely important. The fighting generated worldwide concern, over fears that China and Russia would escalate the fight into nuclear war. The United States sided with China in the clash, causing China to have much more favorable relations with the US. In fact, this incident is thought to be the trigger that led to President Richard Nixon and Henry Kissinger successfully developing diplomatic relations with China in 1971.

As regular readers know, Generational Dynamics predicts that in the approaching Clash of Civilizations world war, Russia and the United States will be allied against China. I’ve given many reasons for this, but the tensions along the Amur River provide another one.

Russia’s Far East is a vast sparsely populated region. Across the Amur River is heavily populated northeast China. By some estimates, there are about 5 million illegal Chinese immigrants living in Russia’s Far East, with the number increasing by a million or so each year. The 1969 border war is well remembered by both sides, so the new DF-41 missile deployment is stoking strong nationalistic feelings on both sides.

Since 2012, China has increased spending on infrastructure along the Amur River border region, to make it easier for Chinese businesses to operate. This supports the rapid growth of Chinese trade in the thinly populated Far East and confirms Russian fears that Chinese businesses and Chinese migrants will take over Russia’s Far East before long.

In 2014, Russia held the massive Vostok military exercises in the Far East, explaining that the military drills were necessary to prepare for war with the United States. And yet, the assets deployed during this exercise were more consistent with preparing for a defense of the Far East, a region that America would be unlikely to invade if it wanted to invade Russia at all. The only state actor that against which such a defense is needed is China. And so it appears that Russia and China claim that they’re each preparing for war with the United States, but in reality they’re preparing for war with each other. Russia Behind the Headlines (2-Sep-2015) and American University and Strategy Page and The Diplomat