Grexit risk: Greece may refuse a new round of austerity 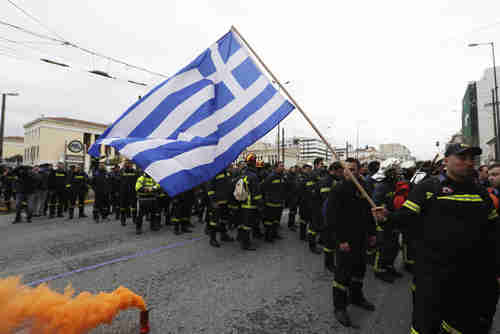 Years before the term “Brexit” was invented, referring to Britain leaving the European Union, people were talking about a possible “Grexit,” referring to Greece leaving the euro currency and returning to its old drachma currency. As Greece enters new negotiations with its lender for another bailout loan, some people are suggesting that Grexit may be a reality this time.

Greece faces a €7.5 billion debt repayment in July. In order to meet that payment, Greece’s lenders – the European Central Bank (ECB), the European Commission (EC), and the International Monetary Fund(IMF) – will have to lend Greece more money. (This is like borrowing from your MasterCard to pay your Visa.)

So there is plenty of time to negotiate an agreement by July, and that’s why the lenders are meeting with Greece now. Unsurprisingly, a meeting on Friday in Brussels failed to reach an agreement after five hours.

We made substantial progress today and are close to common ground for the mission to return to Athens in the coming week. [All sides have] a clear understanding that a timely finalization of the second (bailout) review is in everybody’s interest.

So there’ll be more meetings next week in the hope of reaching a breakthrough by the next meeting of eurozone finance ministers on February, but no really expects that either. In fact, it’s unlikely that the impasse will be broken before the very last moment, and that would be just before the debt payment is due in July.

However, there are other kinds of deadlines that come sooner. There will be elections in the Netherlands on March 15 and in France in April through June. It would be nice to get a final settlement before those elections, since the election results may force the negotiations to start from the beginning.

The creditors are demanding that Greece increase its budget surplus from 2% of GDP in 2017 to 3.5% in 2018. This would require more tax increases, broadening the tax base, and more cuts in pensions. But many in Greece’s government are saying enough is enough. Pensions have already been cut 11 times since the onset of the crisis in 2010, and the government is refusing to cut them further.

The Greek people may be unwilling to tolerate any more austerity. If Greece’s prime minister Alexis Tsipras goes along with the pension cuts, then his government may lose a vote of confidence, forcing new elections before July. Greece’s bond yields are also beginning to spike up to crisis levels, indicating that investors are getting very nervous about Greece again, just like the old day. And in that case, Grexit may really occur this time.

So things are still pretty calm but don’t be surprised if the old days come back, and there are several weekly crises to navigate. Kathimerini and AP and Nasdaq

A state of emergency has been declared in Thessaloniki and surrounding municipalities after a 500-pound unexploded World War II bomb was found during work to expand underground fuel storage tanks.

The bomb was dropped during an air raid in the city on September 17, 1944, around lunchtime. It was dropped by British and American planes targeting rail facilities held by the Nazis.

Around 72,000 residents will be subjected to a forced evacuation before the bomb disposal unit will start its operation on Sunday morning. The evacuation zone will be 2 km (1.2 miles) around the bomb. This will be the biggest evacuation in Greece since World War II. At first the team will remove the detonator and will then transport the bomb to a firing range for controlled explosion. AP and Russia Today